The depressing lesson of Obama's final State of the Union address: Everything is still broken 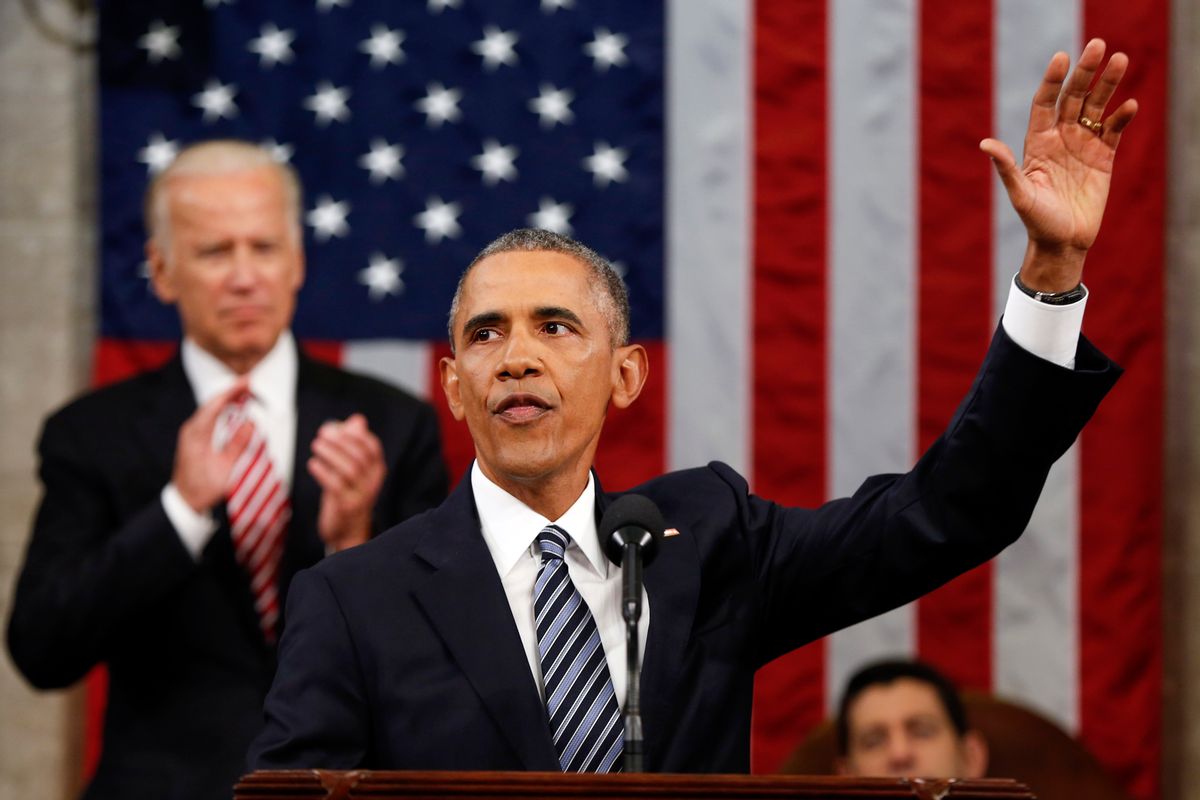 President Barack Obama waves at the conclusion of his State of the Union address to a joint session of Congress on Capitol Hill in Washington, Tuesday, Jan. 12, 2016. (AP/Evan Vucci, Pool)
--

Barack Obama's final State of the Union address contained many of the contradictory elements that have defined his presidency: The call for a more reasoned approach to foreign intervention came from the man whose invasion of Libya is still wreaking havoc in the world. The chiding of Ted Cruz's hypothetical demand that we, in Obama's words, "carpet bomb civilians" sat in the same speech that boasted about the drones whose very real victims have almost all been civilians. The lengthy passage celebrating climate change action was followed by the nauseating fracking tribute. ("Gas under two bucks a gallon ain’t bad, either.") The paeans to immigrants were delivered by the man whose administration is brutally deporting them. The tribute to the "protester determined to prove that justice matters" was coupled with a tribute to (sigh) "the young cop walking the beat."

The speech was also a testament to how irrelevant electoral politics have become in so many ways. It was billed as a departure from the usual laundry list of proposals typically found in State of the Union addresses—an end-of-the-presidency flourish, yes, but also a why-bother admission of the pointlessness of pretending that our politicians are capable of meaningful action.

We are now living in a Frankenstein political age—a parliamentary culture with a presidency grafted onto it. Barring some massive shift in our system—Obama called for one in the speech, but who is especially optimistic about that?—a one-party state is required to pass any significant legislation. Politics is so polarized that Paul Ryan, seated directly behind Obama, wouldn't even clap for a section about curing cancer. Activism, organizing and popular movements, not Washington, are providing the dynamism and action these days. A divided Congress leaves the president able to bomb other countries, sign executive orders and engage in the kind of rhetorical bully pulpit politics that Obama—whose speechifying, public demeanor and embrace of his position as America's first black president became bolder, more liberal and more pronounced as his ability to actually do anything domestically shrank to virtually zero—has skillfully deployed in the past couple of years.

Luckily for Obama, he is opposed—as he has been throughout his presidency—by a Republican Party of eye-watering extremism, and so his rhetoric can go a long way merely by offering a contrast to the horrors on the other side. The lies and bigotry on the right, especially in the era of Trump, have become so insane that when Obama said things like "food stamp recipients didn’t cause the financial crisis—recklessness on Wall Street did," or forcefully criticized the anti-Muslim hysteria sweeping across the country, it was easy to feel a bit of blessed relief.

Republican grandees apparently had Trump on their minds too, if South Carolina governor Nikki Haley's official response to Obama was anything to go by. The job of replying to the State of the Union is never an enviable one, but Haley did about as good a job as could be expected. Her passage about immigration—in which she delicately balanced a rejection of Trumpism with opposition to Syrian refugees and undocumented immigrants—showed that she has the potential to be a formidable communicator of conservative rhetoric. Her biggest problem—and the problem that the establishment which selected her for Tuesday's task also faces—is that her party shows no signs of allowing such an approach to thrive any time soon. But Haley is 43. She has more than enough time to wait for the dust to settle. It's quite possible that she could be delivering her own State of the Union in the near future.