The Razzies aren't fun anymore: The snarky answer to the Oscars has become a pointless, tone-deaf, self-important sham

The scorn heaped on "Fifty Shades of Grey" alone is insane, compared to some truly terrible movies from 2015 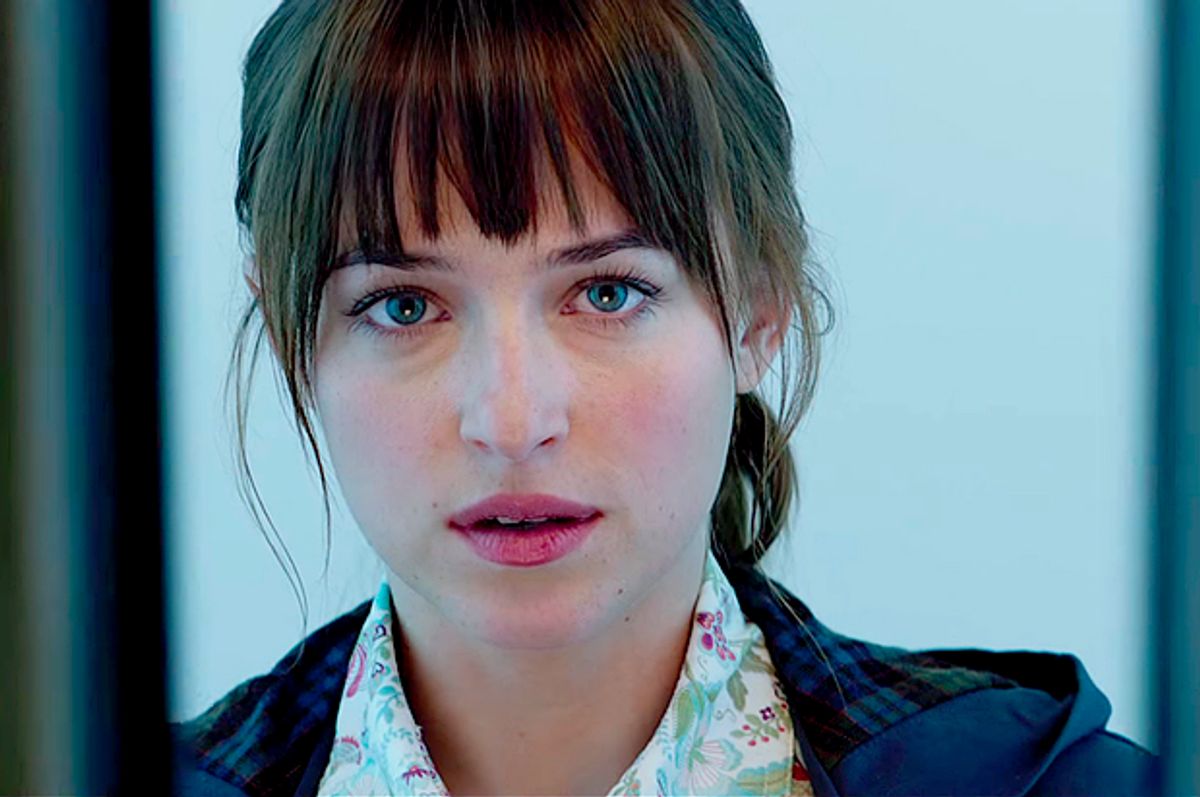 You pretty much know what you’re getting when an awards group can’t even spell the names of the actors correctly. This morning, the Golden Raspberry Awards (popularly known as “the Razzies”) announced their nominations—the movies, directors, screenwriters, and thespians singled out as the “worst” of the year. The list offers the Razzies’ signature mix of the boring and the baffling—with low-hanging fruit like “Fifty Shades of Grey” and “Pixels” honored next to former Oscar winners Julianne Moore (“Seventh Son”) and Eddie Redmayne (“Jupiter Ascending”). In true Razzies fashion, they accidentally listed the actor’s name with an “I.”

The rest of this year’s nominees showed about the same attention to detail and intellectual rigor—less an actual measure of what was truly bad last year than a chance for the Razzies to generate headlines. Thus, the acting pool is filled with big names like Gwyneth Paltrow (“Mortdecai”), Amanda Seyfried ("Love the Coopers" and “Pan”), Michelle Monaghan (“Pixels”), and Dakota Johnson (“Fifty Shades of Grey”), all of whom were OK in bad movies. In fact, critics credited Johnson as the lone bright spot in an otherwise generic BDSM romance: Total Film called her a “revelation,” while New York magazine’s David Edelstein commented that she’s “so good at navigating the heroine’s emotional zigs and zags that you want to buy into the whole cobwebbed premise.”

What I hate about the Golden Raspberry Awards is that they’re increasingly unnecessary in an age when these movies have already been thoroughly roasted on Twitter months before the awards. What can the Razzies say about “Fifty Shades of Grey” that hasn’t already been said? Could they possibly make “Pan” look worse than it did after the fallout from the film’s whitewashing controversy—when Rooney Mara was criticized for playing Tiger Lily, a Native American character? But what’s even worse is that while the awards seem to believe they’re punching up at a broken system, this joyless awards show only continues to punch down at all the wrong targets.

There are few nominees on the list that truly deserve mention. While I’m behind the Worst Picture nominations for “Fantastic Four” and “Paul Blart: Mall Cop 2,” two of the least necessary films ever made, “Pixels” isn’t even in the ballpark of previous Sandler entries like “That’s My Boy” or Worst Picture-winner “Jack and Jill.” In fact, it wasn’t even the worst Adam Sandler movie released this year. “The Cobbler,” Sandler’s bizarre body-switching gentrification movie, received some of the worst reviews in the history of the Toronto Film Festival. In addition, the Netflix-only release “Ridiculous Six” became one of just a few movies to score a zero percent on Rotten Tomatoes.

Aside from “Paul Blart,” you won’t see any of the movies on this list that actually were the worst films of 2015. “United Passions” was one of the most abysmally reviewed movies ever: The FIFA propaganda piece starring Tim Roth earned a 1 rating on Metacritic and a zero on Rotten Tomatoes, meaning absolutely everyone who saw it hated it. In addition, the $25-30 million production posted the most dismal opening in box office history—earning just $918 on its opening weekend. “United Passions” earned just $607 in the United States during its run, making it the all-time king of flops. If that’s not Razzie-worthy, I don’t know what is.

There are so many much better choices that deserve mention that it’s unfathomable that these are the films Razzie voters decided to call out. After all, 2015 was the year that brought us “Accidental Love,” the David O. Russell political satire abandoned back in 2011 due to funding issues; it found its way into theaters anyway, clearly half-finished and cobbled together from scraps. Co-starring Jessica Biel and Jake Gyllenhaal, the result is so embarrassing you want to throw yourself in front of the camera to stop it. There was also “The Human Centipede III,” Tom Six’s final sequence in the ass-to-mouth franchise. At one point, it shared the honor of the lowest Metascore ever (before skyrocketing all the way up to a 5). It garnered a worst rip-off or sequel nod, but doesn't crack the majors.

But of course, this is how the Razzies work. Last year, the Daily Dot’s Samantha Allen pointed out that the group’s shortlist referred to "Transformers: Age of Extinction" as “Trannies #4.” According to Allen, the awards merely serve to punch down at already marginalized groups in Hollywood—like trans people, women over 40, and black folks, who have been nominated for a disproportionate number of awards. Since 1980, Allen tabulated that 13 black actors had been nominated for Academy Awards, while 14 had nabbed Razzie nominations. “That’s a sentence that reveals so much about Hollywood: how infrequently it recognizes black actors, how few black roles are created in the first place, and how harshly black actors are judged for their work in this environment,” she wrote.

Thus, if you have to ask why a movie like “Fifty Shades of Grey” (which had a pretty decent Metascore of 46) earned six more nominations than “United Passions” and four more than “The Human Centipede III,” it’s because of who it appeals to: women. In 2010, “Sex and the City 2” earned a joint Worst Actress nomination for all four of its leads, while every single “Twilight” movie scored a nomination. This year, the Wachowskis’ “Jupiter Ascending” arrived on the Razzies’ list not just because it was a massive flop in theaters (losing over $100 million) but because it did what so few action films do: put a woman at the center.

The case of “Jupiter Ascending” further illustrates why an exercise like the Razzies is so frustrating: It treats all of these movies like they’re on an even playing field, when they are anything but. The Wachowskis’ film might have been a box-office bomb but it was an incredibly daring, noble one. After all, how many movies have you seen that contain a sci-fi romance between an albino vigilante werewolf and a Russian space princess who cleans toilets for a living? Whether or not they are successful, such bold visions are the kinds of movies that we should be encouraging Hollywood to make—ones that are unafraid to do something different (or challenge the system), even if the end result is a tad ridiculous.

Treating a silly, harmless misfire as worse than “The Human Centipede III,” which features a 500-person chain of prisoners eating their own filth, is both a grave disservice to the Wachowskis and to movie-lovers everywhere. After all, it’s really hard to hate a movie in which Mila Kunis defends her interspecies crush by asserting: “I love dogs. I’ve always loved dogs.” The same could be said for “The Boy Next Door,” Jennifer Lopez’s delightfully over-the-top erotic thriller. This future camp classic exists on a planet where giving someone a first-edition of “The Iliad” (found at a yard sale!) is no big deal. “The Boy Next Door” might be a dumb movie, but it’s also a necessary one: It’s one of the rare movies to feature two Latino leads.

Targeting “The Boy Next Door” takes all the fun out of what the Golden Raspberry Awards should be: a glorious celebration of failure. The best moments in Razzie history have been when it felt like the actors were in on the joke—like when Halle Berry showed up to accept her Worst Actress award for “Catwoman.” In 2011, Sandra Bullock gave out a wagon full of copies of “All About Steve”—for which she won Worst Actress—to hand out to Razzie members; she begged them to watch the movie again. Say what you will about “All About Steve,” but Bullock—who served as a producer on the movie—fought for it, even after it tanked. She believed in that piece of crap.

Founded in 1980 by John Wilson, the Golden Raspberry Awards were meant to serve as a counterpoint to the Oscars—deflating the egos of the rich and self-important—but the show become much, much worse than the ceremony it’s meant to mock. Thirty-five years after the Razzies gave out their first Worst Picture award to “Can’t Stop the Music,” they’ve become a nothing but an outdated, tone-deaf roast—like a drunk insult comic who doesn’t know when he’s had too many and won’t get off the stage. It’s time for the Razzies to cut themselves off and go home.