Hillary Clinton's absurd Bernie smear: Why attacking him from the right on healthcare makes literally no sense at all

The Democratic front-runner is starting to feel the Bern, and in desperation she's picking entirely the wrong fight 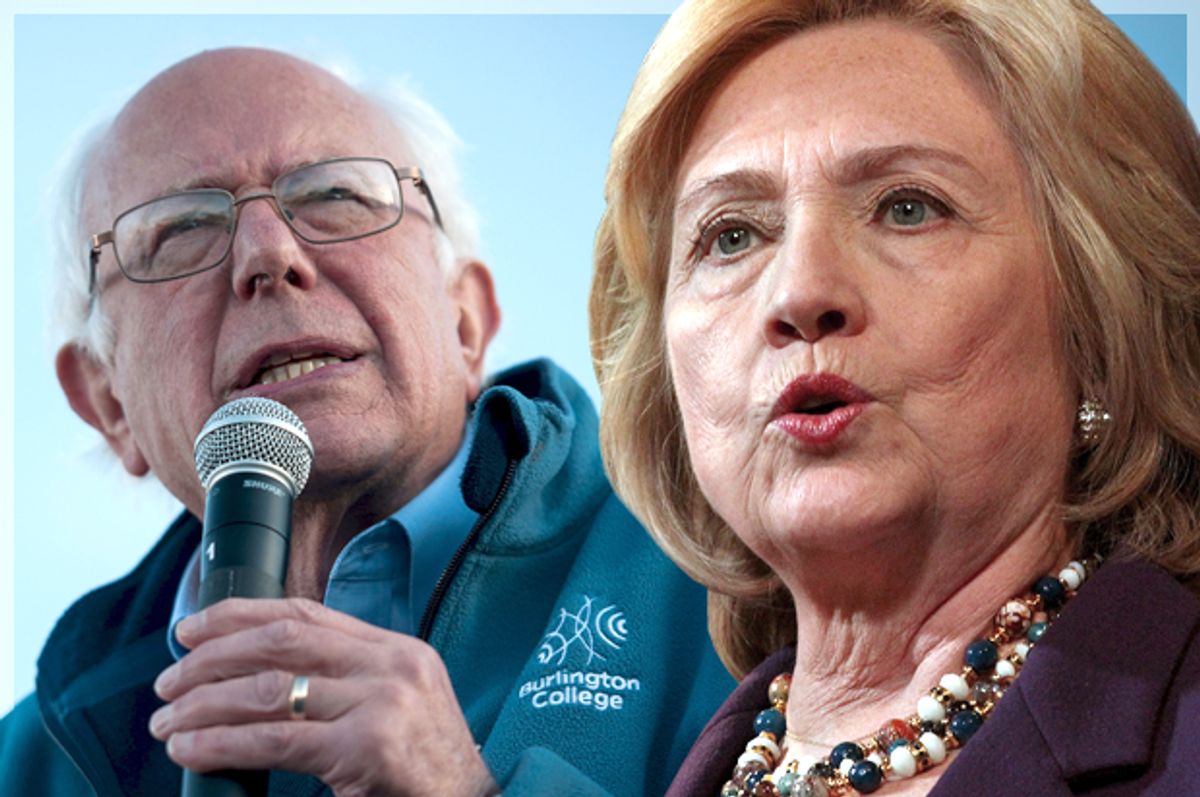 Sanders, she now insists, would do so from the left by instituting a program — single-payer healthcare — that would be more progressive than the Affordable Care Act. Yet this possibility is portrayed in the starkest of terms. It’s as if the Clinton campaign saw a house burning down and told the fire department to put it out by setting the house next door on fire to suck up all the oxygen feeding the flames.

The attack is predicated on a bill that Sanders introduced in the Senate in 2013 that would have set up national single-payer. The bill would have required each state to set up its own single-payer program. A federal board would oversee these state programs and take charge of any that don’t meet whatever requirements it lays out. All federal programs – Medicare, Medicaid, SCHIP – would have been folded into these state-run ones.

In a way, Sanders’ bill was structured a little like Obamacare, with each state having the option of setting up a marketplace exchange to sell insurance plans, and the federal government operating one large exchange for consumers in states that don’t want to run their own. Since it would have moved even further to the left than the ACA, obviously it was dead on arrival in Congress.

What’s particularly weird is Clinton’s specific accusation that Sanders’ single-payer plan would allow states to opt out altogether. As if Bernie Sanders, the self-described national democratic socialist, would design a health insurance plan with a giant sop to conservatives. It is, simply put, divorced from reality.

The Clinton campaign has pressed this attack hard all week, even going so far as to have Chelsea Clinton, who has never been much of an attack dog, go on the trail to slam Sanders for a proposal that would “strip millions and millions and millions of people of their health insurance.” That’s a lot of millions! It also makes Bernie Sanders sound like Mitch McConnell, only with a more grating accent.

It’s a typical Clinton campaign move. Have a bad week at the polls? Overreact with a terrible, transparent attack that anyone with an IQ north of negative can see through. The fact that this move might alienate the Sanders supporters she’ll need later on if she wins the nomination does not seem to enter the calculation.

I’ve been watching liberals grumble about this whole blow-up in my Twitter feed for a couple of days, calling Clinton dishonest and dirty while also acknowledging that there is some value to having this fight now, in the primaries, so as to sharpen the general Democratic healthcare platform before the general election. There have also been suggestions that Sanders and Clinton could unite to push some sort of public option, the fabled unicorn the Obama administration took off the table while writing the ACA back in 2009, thus dooming its progressive credibility for all time in some circles.

Settling on a healthcare goal for the party platform is a worthy goal of this debate, if that’s in fact what’s going on here. But Democrats could all save themselves a fair amount of grief by remembering this truth: No healthcare proposal from Sanders or Clinton, be it a public option or a single-payer system, has any chance in hell of passing through the Congress that the next president will be saddled with.

I know it’s fashionable in some quarters to talk about bringing a political revolution to Washington, but the reality is that the major barrier to enacting single-payer or adding a public option to the ACA remains Congress and the army of industry lobbyists who will descend on it the minute the insurance companies think their bottom lines are in jeopardy. Plus the House of Representatives is likely to stay under Republican control after November, and those Republicans are going to be the same stubborn, jelly-brained nihilists who have turned President Obama’s hair gray over the last seven years.

An even if by some miracle the House flips to the Democrats, a president would still have to contend with the Senate. There is a chance the Democrats could become the majority party there, but it won’t be a 60-member supermajority that marches in ideological lockstep. Joe Lieberman and Ben Nelson may be gone, but the chamber has not yet been fumigated of their spirits.

In fact, assuming the next president is a Democrat, his or her main job with regard to healthcare will be keeping Republicans from repealing the Affordable Care Act. Adding to it or fixing some of its flaws will likely have to wait until either we have a more liberal Congress or the Republican Party decides to start governing again. Everything else we’re hearing is just noise.

Of course, maybe President Clinton or President Sanders will surprise us all and pull off a couple of miracles. But considering how insane the election of either is likely to drive the GOP, some pessimism is definitely warranted.