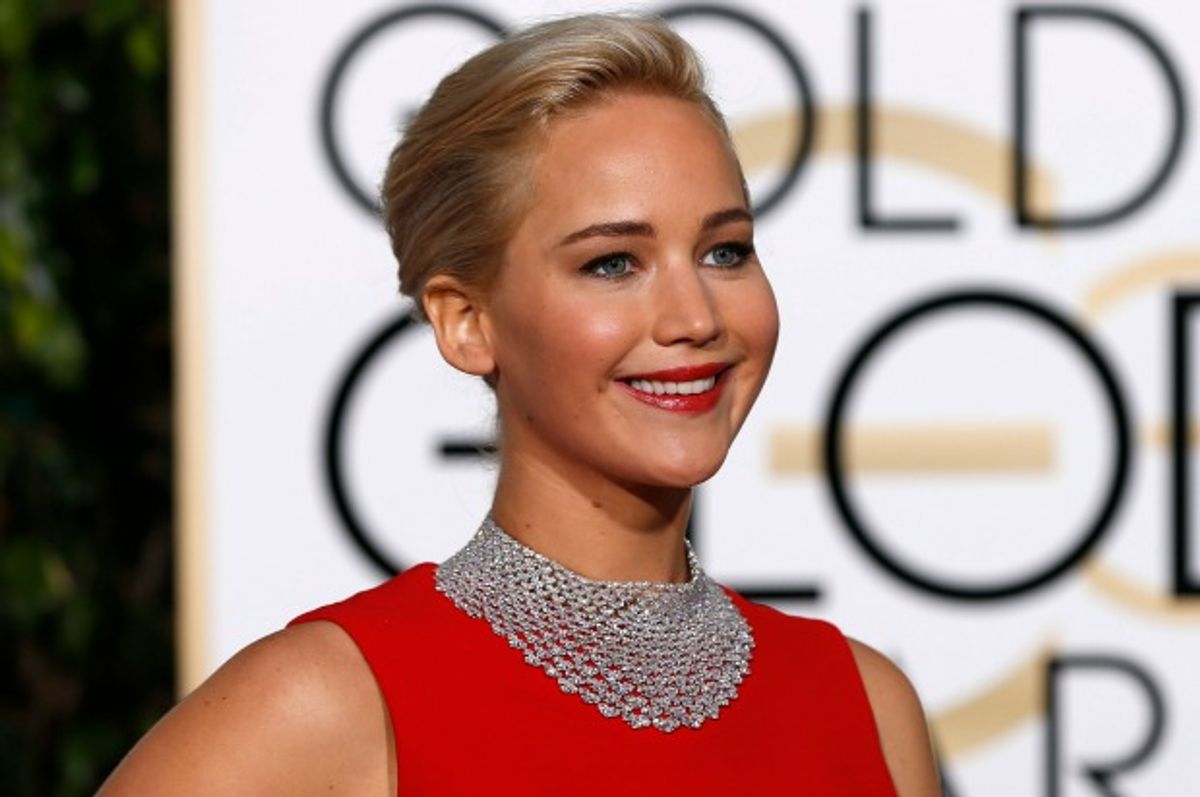 Jennifer Lawrence is getting Howard Dean-ed. In 2004, the Vermont governor and presumed Democratic frontrunner placed in a shocking third behind former Senators John Kerry of Massachusetts and John Edwards of North Carolina in the Iowa primaries. During a speech given shortly after the polls, Dean enthusiastically predicted that he would still win the presidency. “We're going to South Dakota and Oregon and Washington and Michigan, and then we're going to Washington, D.C., to take back the White House!” he boasted. Dean finished the thought with an emphatic “Yahhhhh!” that infamously spelled the end of his campaign.

When the moment was picked up by television news—later branded the “Dean Scream”—outlets isolated the speech to those four seconds, which made Dean appear unhinged and unpresidential. In addition, Paul Bedard at the Washington Examiner reports that there was another reason Dean sounded a bit off: The crowd of attendees was quite loud, and he had to scream over it to be heard. “The sophisticated microphone Dean had in his fist was built to filter out surrounding noise for news crews filming the event, and by doing so unfairly broadcast his scream minus the building crowd chants the former Vermont governor felt compelled to yell over just to be heard,” he writes.

Nevertheless, that sound byte became a staple of the 24 news cycle—played and replayed a reported 633 times in the four days following the “gaffe,” while those four seconds quickly went viral. Although those who saw the speech live didn’t see anything unusual about the outburst, Dean plummeted in the polls nonetheless. Whereas the governor had been leading in New Hampshire—by as much as 30 percentage points over his closest challenger, John Kerry—he would end up finishing second in that contest, dropping out weeks later. The 2004 race was the first true election to take place in the light of the modern Internet age, and it was perfectly indicative of its worst tendencies.

While the future of the White House isn’t in question, “Hunger Games” actress Jennifer Lawrence is likewise falling victim to the fun-house mirror of the media. After winning a Golden Globe for her performance in David O. Russell’s “Joy”—which the HFPA liked more than I did—Ms. Lawrence fielded questions from reporters in the Globes’ press room. A foreign journalist, Juan Pablo Fernández-Feo, asked the 25-year-old a question as he looked at his smartphone. “You can’t just live your life behind your phone, bro,” Lawrence responded. “You can’t do that. You’ve gotta live in the now.”

The outrage following her comments has been furious—with Twitter users suggesting that she was “ignorant,” “rude,” “classless,” “not feminist,” and even “racist” for correcting the journalist’s behavior. Because the reporter was a non-Native English speaker, critics have argued it’s likely that he was reading the question from their phone, as many journalists do when interviewing celebrities. Just as following the “Dean Scream,” the blowback broke the Internet—with everyone from Cosmopolitan and BuzzFeed to the International Business Times reporting on the incident. Even Kathie Lee and Hoda chimed in.

While Lawrence is the first to point out that she can be, in fact, quite rude—as she told E! during an interview—the incident looks a lot less alarming in context. If you watch the entire six-minute Q&A, instead of just the 45 second clip, it comes off as a fairly standard ribbing. The alleged flap is far less egregious than when Jesse Eisenberg called a female reporter “the Carrot Top of interviewers,” when Denzel Washington was openly hostile toward an Australian journalist, or Bruce Willis mocked a British interviewer’s questions, but they generated none of the same controversy. Did you even hear about them until now?

In addition, another reporter in the press room clarified that the fact the foreign reporter was on his phone had nothing to do with his ESL status. Chris Trondsen, the host of Pacific Rim Video, tweeted: “She did not bully that reporter. He was not reading questions off of his phone. The reporter was asking a question but either filming or taking pictures off of his phone while talking to Jennifer Lawrence. … Jennifer Lawrence wasn't rude at all. She just wanted him to be present.” And as Trondsen points out, she fielded the rest of the journalist’s questions respectfully and politely after the incident, as well as previous questions from other foreign reporters.

Although it’s unlikely that Lawrence’s career will be derailed as swiftly as Howard Dean’s campaign, her own “Dean Scream” is leading to a unfortunate (and unnecessary) backlash against the star herself. It’s as inevitable as it is incredibly commonplace for A-list actresses.

“None of this is Lawrence's fault,” Mic’s Kevin O’Keefe wrote. “This is how Hollywood works. Actresses are hot one second and annoying the next. Anne Hathaway, Gwyneth Paltrow and Kate Winslet can empathize.” It might seem sudden, but this backlash has been building for years.

If O’Keefe argued that evening represented “Peak Jennifer Lawrence,” it’s notable that the incident took place the same night as Kate Winslet won a surprise award for “Steve Jobs.” Seven years ago, Kate Winslet won two Golden Globe awards for “The Reader” and “Revolutionary Road”—and would go onto win the Oscar for Best Actress for her performance in the former. If Winslet has been virtually absent from the screen since, Time’s Daniel D’Addario claimed it’s not an accident. He blamed her “perceived aggressive awards thirst,” as the actress struggled to stay composed during her wins. O’Keefe further pointed out that the moment she told herself to “gather” at the Globes was her “Dean Scream” moment.

It’s telling that, when I watched the Golden Globes in 2009, I didn’t see her reaction as “desperate” but perfectly natural—the exact response I would have if I won a slew of awards all at once. (Full disclosure: When I get too happy, my body shuts down, and I start shaking like a chihuahua. I would have had to make myself lie down on stage to regroup.) In fact, I wasn’t even aware there had ever been a Kate Winslet backlash until I read D’Addario and O’Keefe’s pieces, just like I wouldn’t have seen anything wrong with Dean’s yell or Lawrence’s comment if someone didn’t tell me I was supposed to find them alarming.

Although backlash culture always seems to punish women harder (I can only imagine the reaction if she’d reacted like Eisenberg), everyone looks crazy, desperate, or rude if you isolate the right sound byte. Jennifer Lawrence might be a bit of a jerk sometimes (who isn’t?), but the actress has got nothing on the people dogpiling on her. Just ask Howard Dean.