They're a perfect fit! It's no shock that Ted Cruz is "thrilled" to have the support of "Duck Dynasty" bigot Phil Robertson

If Cruz weren’t whoring himself out for the religious vote, he’d be concerned a man like Robertson is on his side 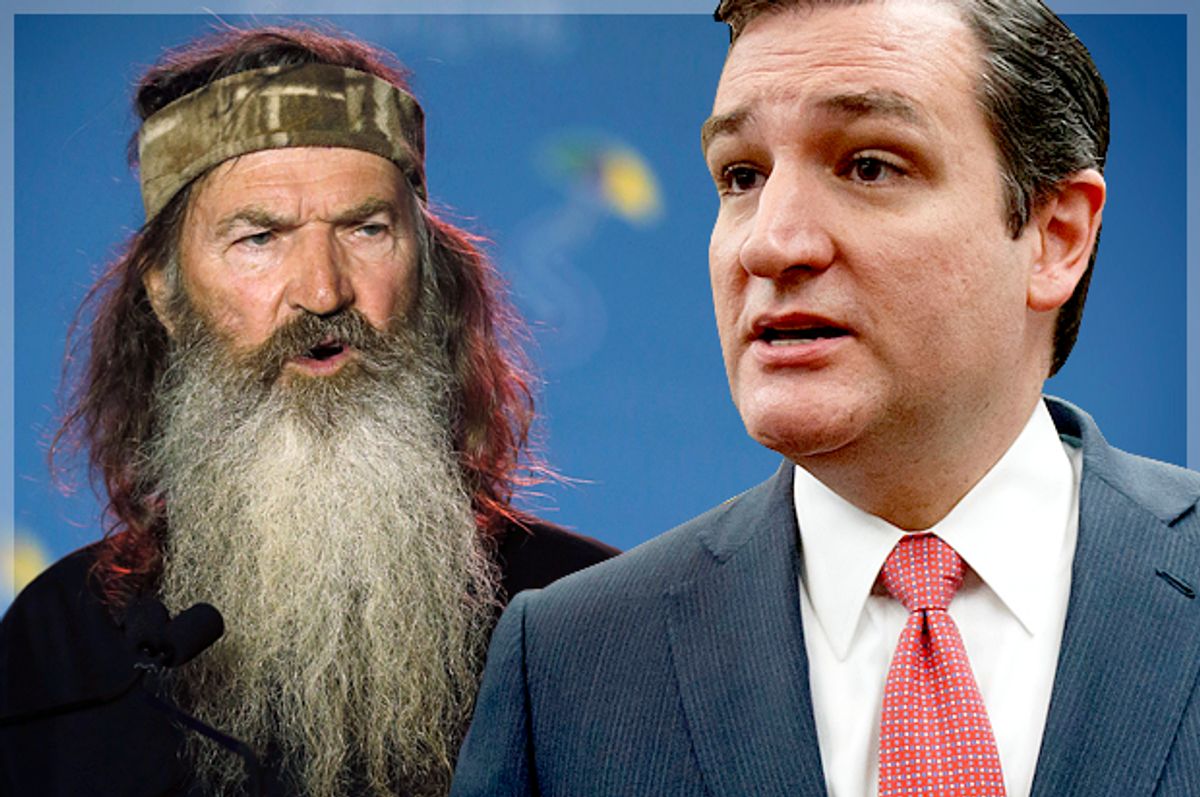 Phil Robertson, the knuckle-dragging patriarch of the “Duck Dynasty” family, has endorsed Ted Cruz for president. In a painfully awkward video (which features Cruz unnaturally decked out in face paint and camouflage), Robertson made the union official: “My qualifications for president of the United States are rather narrow: Is he or she godly, does he or she love us, can he or she do the job, and finally, would they kill a duck and put him in a pot and make him a good duck gumbo?”

“I’ve looked at the candidates,” Robertson mumbles in the video released by Cruz. “Ted Cruz is my man. He fits the bill.” But it’s not quite enough for Robertson to say he’s evaluated all the candidates and decided Cruz is his guy (last year Bobby Jindal was the man for the job), he also insists that Cruz and him are really the same: “The reason we’re going to vote for you, all of us, is because you’re one of us, my man. It’s now or never.”

If Cruz weren’t whoring himself out for the religious vote, he’d be concerned that a man like Phil Robertson said this publicly. Phil has become famous on account of his fevered bigotry. He’s insulted gay people, African Americans, the Constitution, and even Southern historians.

In his famous 2013 interview with GQ, Robertson shared this lovely insight into homosexuality: “It seems like, to me, a vagina – as a man – would be more desirable than man’s anus. That’s just me. I’m just thinking: There’s more there! She’s got more to offer. I mean, come on, dudes! You know what I’m saying? But hey, sin: it’s not logical, my man. It’s just not logical.”

He then linked homosexuality to bestiality, arguably the dumbest slippery slope argument ever conceived. In that same interview, Robertson also offered a bit of racist revisionist history for readers. Here’s his account of life in pre-Civil Rights Louisiana:

“I never, with my eyes, saw the mistreatment of any black person. Not once. Where we lived was all farmers. The blacks worked for the farmers. I hoed cotton with them. I’m with the blacks, because we’re white trash. We’re going across the field…They’re singing and happy. I never heard one of them, one black person, say, ‘I tell you what: These doggone white people’ – not a word! Pre-entitlement, pre-welfare, you say: Were they happy? They were godly; they were happy; no one was singing the blues.”

That’s how Robertson described the South under Jim Crow and a generalized system of oppression and subjugation, a system in which black people were lynched, beaten, disenfranchised, and segregated.

Robertson is also the guy who fantasized (aloud and in front of people) about a family of atheists being raped and murdered. In a failed attempt at moral philosophy, he said the following at prayer breakfast in March 2015:

“I’ll make a bet with you. Two guys break into an atheist’s home. He has a little atheist wife and two little atheist daughters. Two guys break into his home and tie him up in a chair and gag him. And then they take his two daughters in front of him and rape both of them and then shoot them and they take his wife and then decapitate her head off in front of him. And then they can look at him and say, ‘Isn’t it great that I don’t have to worry about being judged? Isn’t it great that there’s nothing wrong with this? There’s no right or wrong, now is it dude?’”

This is who Phil Robertson is, and Ted Cruz says he’s “thrilled to have Phil’s support for our campaign…The Robertsons are a strong family of great Christian faith and conservative values.”

In so many ways, Robertson and Cruz are a perfect fit. They’re charlatans selling themselves to similar constituencies. The beards, the clothes, the drawl, the hoodies – this is part of Robertson’s branding campaign. He's constructed an image that’s as focus-grouped as a garden-variety political ad - that's how you make a hit TV show and sell bandanas to rednecks at Wal Mart. But before they were reality TV stars with a target demographic, the Robertsons were clean-shaven aristocrats from Northern Louisiana who golfed at country clubs.

Ted Cruz isn’t much different: He’s a Harvard-educated lawyer who’s married to a Goldman Sachs investment banker (the news this week that Cruz failed to disclose personal loans from Goldman Sachs was a reminder of this). And yet Cruz has perfected his folksy everyman shtick, which flatters the conservative base. He may be an authentic theocrat, but everything else about him is false and contrived, just like Robertson's endorsement video.