Bowie, Rickman and the fan's disoriented grief: Why their deaths feel like "a tear in the fabric of your life" 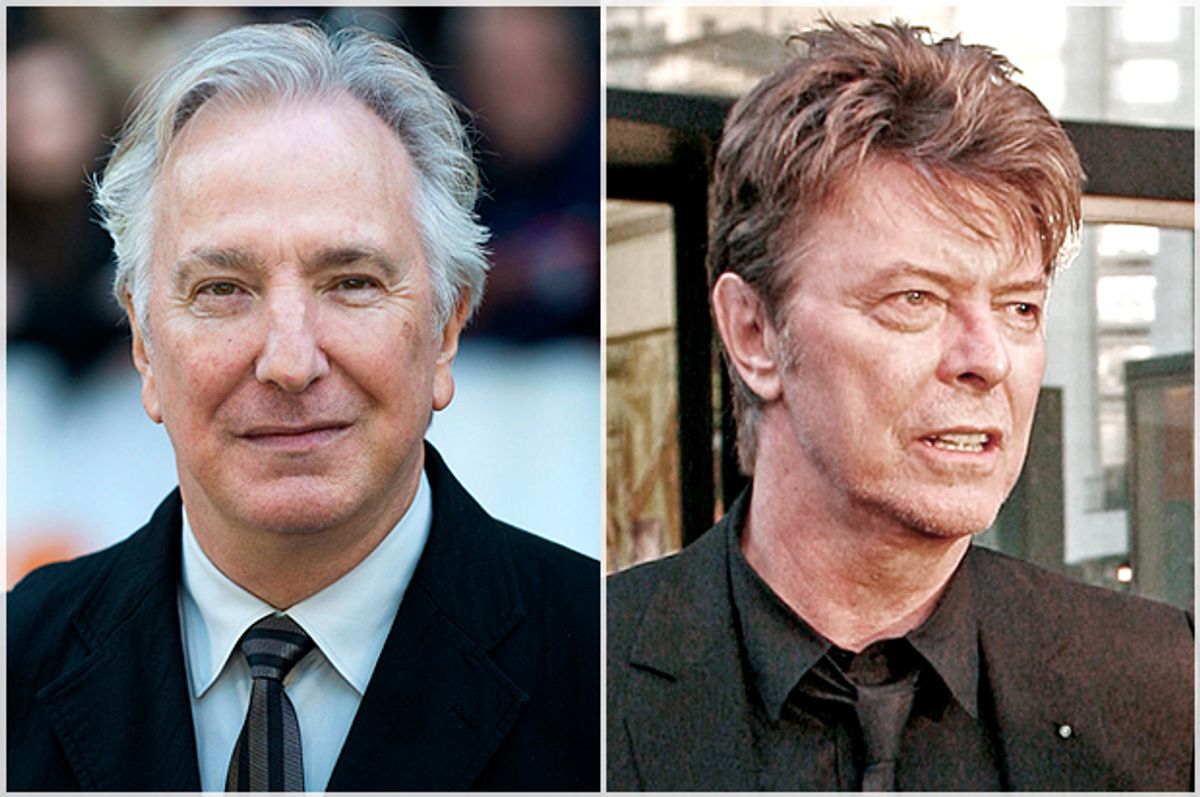 It’s natural for people to mourn friends and family and colleagues. But this week has seen an enormous outpouring of grief for two people most of us have never met or worked with or spoken to. The sudden departures of David Bowie and Alan Rickman have led to depression, confusion, endless think pieces, and heartfelt appreciations on social media.

In the case of some celebrities, the bond is especially complicated: Bowie was Ziggy Stardust and The Man Who Fell to Earth. Rickman was Severus Snape and Hans Gruber and Colonel Brandon. When we miss them, who are we really missing?

Where does the bond between a fan and a star – musical, cinematic, literary – come from, and what happens when it’s broken? And how does social media make the mourning process more communal and intense?

We spoke to Art Markman, a cognitive psychologist at the University of Texas at Austin, about the way celebrities get inside our psyches. The interview has been lightly edited for clarity.

The deaths of David Bowie and Alan Rickman took people by surprise, and they’ve been mourned in a way that’s very deep and painful and widespread. How does the bond between a fan and a star originate and how different is it from, say, a real friendship?

Whenever you become a fan of something or someone, you create a relationship with a bunch of people, often, who also have a similar relationship. So there’s a lot of discussion about these people. Because of this set of social interactions you create, this person, or this team, becomes part of the group: They’re a member of that group despite the fact that there’s no two-way interaction. They’re donating their music or their artwork, and they become like a member of the extended family. Particularly, with people in arts that also communicate some sort of emotional response, that bond gets any deeper because you end up opening yourself emotionally to that individual. As a result, you can come to feel that they know something about you.

I’ve read interviews with actors who talk about the fact that on the basis of screen performances, [fans] think they know the actor – they know who that actor is as a person.

It’s especially strange with an actor since an actor portrays other characters. This goes double for Bowie.

We also know people who undergo shifts in their personalities over the course of their lives, as far as the personas they take on. For people who were older, and able to watch that maturation process, they feel like they were walking along in some ways. You’ve really developed a relationship with this individual.

And then on top of that, for people who end up engaging with these celebrities in middle school and high school and college, where you are separating from your parents as an individual. So musicians and actors can become a part of that, become associated with that. That’s why the music you listen to then persists with you for the rest of your life.

This is the way we define ourselves.

That’s right – these individuals play a major role in our sense of self. And when they die, particularly when they die unexpectedly, so there’s no time to prepare for it, it’s a shock.

Is it the same as losing a friend or relative?

It’s similar in some respects. I like to refer to it as a tear in the fabric of your life – it creates a kind of discontinuity.

It’s similar because it’s a loss. The difference is that with a family member, or a friend you have an ongoing relationship with, it ends the ongoing relationship. Whatever plans you had stop. So the grieving process for friends and family is a much longer process.

What you’re getting with [celebrity deaths] is the shock of loss. But you can continue to engage with their previous performances. And because that was the primary mode you had to begin with, it doesn’t change as much as the loss of a friend or family member.

How does social media make the process work differently?

I think that for anyone who felt engaged with a particular celebrity, they still wanted to go talk to people about it.

They’d go to a physical space – they’d go to Central Park after John Lennon was shot.

Exactly. One of the big differences is that for really beloved celebrities who had shocking deaths, like Lennon, you could rest assured that you’d bump into somebody fairly quickly who was affected by that.

If your tastes were more obscure, you could find yourself out of luck looking for someone to replicate that sense of loss. While on the Internet, you’d throw it out there on Facebook and Twitter and find a few people who’d respond.

One of the things interesting about this era is that for particularly beloved celebrities – Bowie had a lot of fans, and Rickman was very distinctive – is that social media brings out the sheer number of people who want to share over this. For a brief period of time, every other post was about Bowie and, today, Rickman.

That creates a real sense of a massive outpouring, which is different than the way we experienced it 20 years ago, where you wouldn’t be surrounded by that many people sharing for that period of time.

To what extent is our fascination with celebrity hard-wired in the brain and to what extent is it a cultural development that grew up over the last few centuries, part of the modern, media-dominated?

I think this is something that’s wired – we respond to loss in our community. The thing that’s new is that the size of our community has expanded. If you read Biblical texts, the king of a nation would die, and the people of the nation would mourn. None of those people, or few of them, had any personal interaction with the king. But it’s a loss in your community, and something that creates a change. A lot of these people have become part of your conversation.

Whenever you have someone who influences the way you carry on your day-to-day life their passing creates a conceptual loss for you.