Carly Fiorina, in desperation, tries to get attention for being a better wife than she thinks Hillary Clinton is 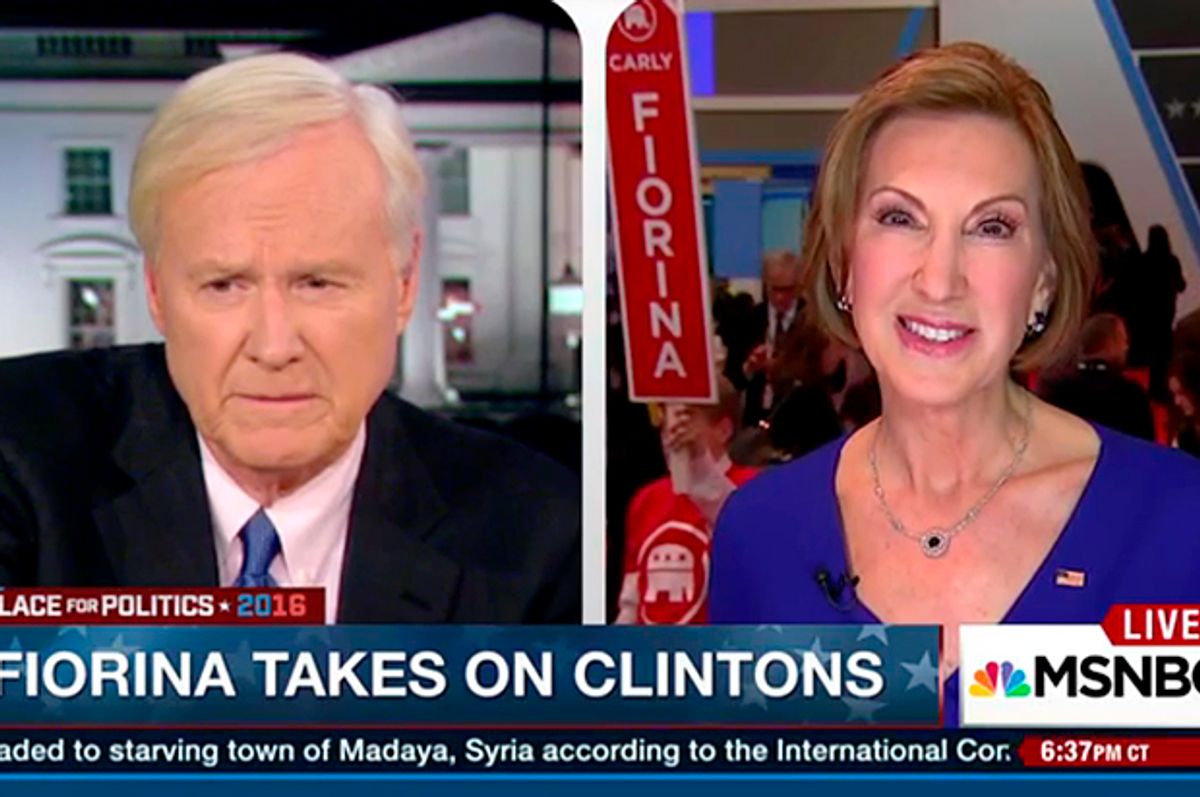 Carly Fiorina's poll numbers have plunged so low that she got booted to the undercard debate Thursday night, and in her last, grasping attempt at relevance, she is trying to trick voters into thinking she's running for the Wife of the Year contest, instead of the presidency. Fiorina kicked off the debate with standard issue bragging about being "blessed" and not being a "political insider" before pivoting to an embarrassing bit of naked pandering.

"And unlike another woman in this race, I actually love spending time with my husband," she crowed.

It is also worth noting that this can also be said of all her Republican competitors, as well. Not a one of them enjoys spending time with his husband. If only this contest really were for Wife of the Year! She'd have it in the bag.

Alas, the contest is not who loves her hubby the most. Chris Matthews was clearly disgusted by Fiorina's attempt to drag something as deeply personal as someone's marriage into all this, and asked Fiorina, after the debate, if she believes the Clintons have a "real marriage." Fiorina, who is clearly committed to making this best-wife-ever strategy into a real campaign move categorically refused to answer, even when Matthews asked her repeatedly to answer the question.

"They’ve been married for a long time," Fiorina kept repeating with a smirk, clearly mistaking smarminess for cleverness. Then, in a move that really drives home Fiorina's magical combination of a massive ego and an utter lack of self-awareness, she complained that Matthews wasn't asking about the "many other things," said in a sing-song voice, that people supposedly want to talk about.

At what point, in a magical moment, she brought up something that may be even less relevant than how often the Clintons bang boots, which is the endless number of bizarre conspiracy theories of criminal behavior Republicans keep generating, undeterred by the fact that you need evidence in order to prosecute such things.

This big of self-righteous posturing is silly, of course, because, as Matthews pointed out, she brought this up herself. Why isn't even much of a mystery. It's naked pandering to the prurient interest that right wingers have had in the Clintons, their marriage, and their sex lives since Bill first stepped on the national stage. Or even longer than that, as Clinton herself admits that she adopted her husband's name in no small part to quiet chatter about her independent ways back when he was governor of Arkansas.

Fiorina clearly hasn't been paying attention to the news cycle these past couple of weeks or she'd know that the trendy reason on the right to hate the Clinton marriage is because Hillary loves her husband too much. Trump, who is the setter of these trends, has been on a rampage, digging into the old Whitewater conspiracy theory cycle and arguing that Clinton is "one of the great abusers of women", due to allegations of rape and sexual harassment launched alongside allegations that the Clintons killed Vince Foster. The idea is that she's guilty of all these alleged crimes, too, maybe more so because it's her job, as a woman, to keep her husband under control.

The differing accounts from Trump and Fiorina on why we should hate Clinton for her marriage show that the right has carefully constructed a double-edged sword for Clinton. If she loves her husband, then she's castigated for being a simp who can't stand up to her cheating husband. If she doesn't, then she's a bad wife, distant and frigid. Anything in-between, where people are complicated and 40-year marriages have a lot of ups and downs, well, ugh, that's complexity and the right in notoriously hostile to that sort of thing.

The only way she could win with this set is to be a widow, and even then, knowing the conspiratorial nature of the right, they'd start implying she had him knocked off to get the sympathy vote.

Of course, the various attacks on Clinton for being a wife are just proxy attacks on her for being a woman. It's a way to draw attention to her gender and to invoke still active social anxieties about women refusing to be second banana to their husbands.

Being a woman who validates and advances misogynist narratives has long been a path to power on the right. You are forgiven for your ambition as long as you're useful as a prop, putting a female face on the justifications for sexism. But there's obviously a hard limit on how close you get to the top by being the woman who hates other women, which Fiorina is finding out as her star quickly fades.