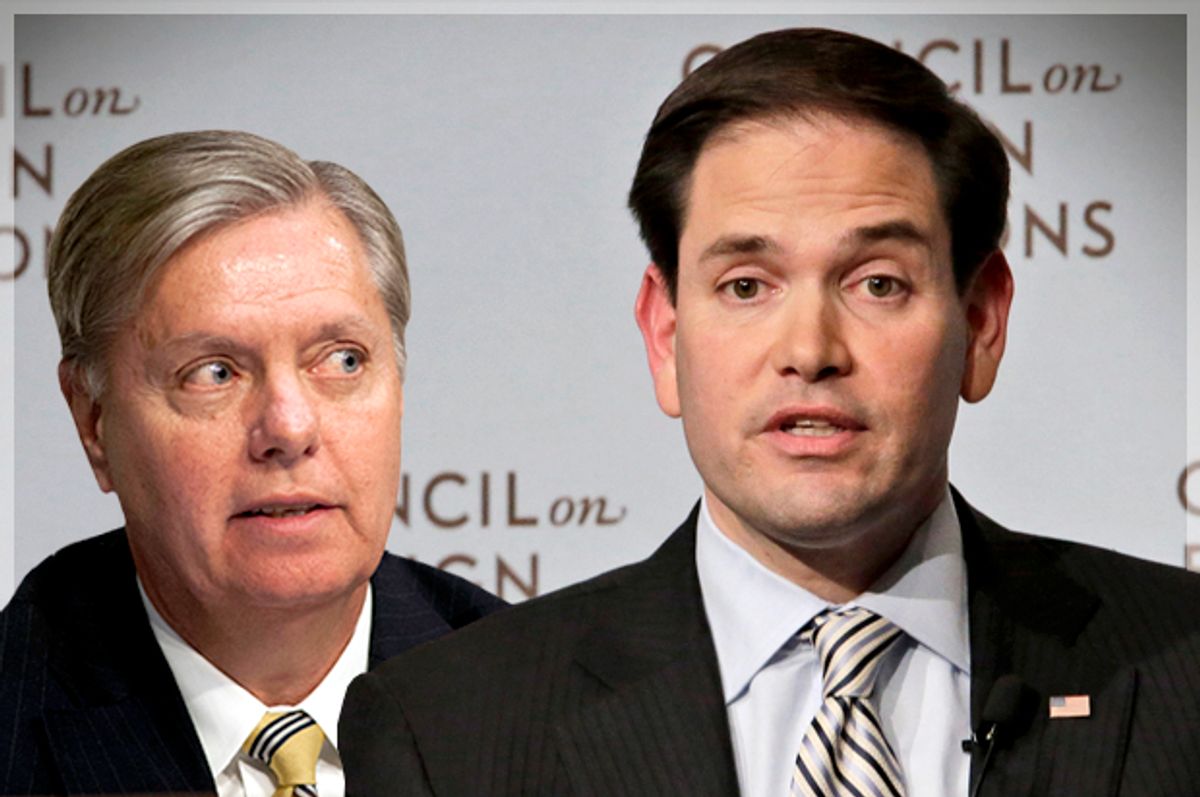 John Ellis Bush is not a smart bet for the presidency. He came into the Republican nominating race the presumed favorite, with a mountain of cash and the Bush family political network at his back, and he’s squandered both those assets with a *cough* low-energy campaign that’s left him languishing in the polls pretty much everywhere. Politico reports this morning that Jeb’s donors have all but given up on him and are waiting – out of loyalty to the Bush dynasty – for Jeb to drop out before they start cutting checks to his rival candidates. The acrid stench of failure surrounds the Bush campaign.

And so it’s mildly interesting that Sen. Lindsey Graham – who was also enveloped by the stench before he dropped out of the 2016 race – gave his endorsement to Jeb on Friday morning. Graham was polling at a few tenths of a percent north of zero when he called it quits, so his endorsement won’t do much for Jeb’s own anemic support, and it’s unlikely that Graham’s approval will alter the trajectory of the Bush campaign. More than anything else, Graham’s endorsement of Jeb is an unsubtle “screw you” to Marco Rubio.

If you’re an establishment creature like Graham, Rubio is a far better vessel for your endorsement than Jeb. He has stronger poll numbers, is a better campaigner, and represents the best hope for taking down Donald Trump and/or Ted Cruz. But Graham has history with Rubio – they were both members of the bipartisan Gang of Eight that crafted the Senate’s comprehensive immigration reform legislation in 2013. After working diligently to pass that bill, Rubio dropped it like a hot rock when it became clear that conservatives in the House wouldn’t support it. And in his endorsement of Jeb, Graham made a point of lauding the sort of political consistency that Rubio did not demonstrate on the immigration legislation they produced together. The party establishment still hasn’t united behind a single candidate, and by endorsing dead-end Jeb, Graham sent an unmistakable message that Rubio, his political promise notwithstanding, can’t be trusted.

Also worth noting is the depressing fact that Graham – who wants to bomb, invade, and occupy pretty much every country between Turkey and India – is considered one of the “serious” and “respected” foreign policy voices within the GOP. Rubio’s campaign has been based largely on his foreign policy “strength” and expertise, and he occupies the same insanely hawkish space as Graham. On paper, at least, Rubio would seem to be the likely and obvious choice for someone like Graham, who actively disdains the “isolationist” policies of candidates like Ted Cruz. But he went with Jeb instead, calling him “ready on day one to be commander in chief” and the only candidate who “understands how to bring the world on board” with America’s misbegotten foreign policy adventures. Again, the message isn’t necessarily that Jeb can and will do these things – it’s that Rubio can’t.

Right now the Republican establishment is facing something of a nightmare scenario heading into the early state voting. It’s widely assumed that Trump or Cruz will win Iowa, and right now in New Hampshire there is a cluster of “establishment” candidates – Rubio, Jeb, Kasich, and Christie – all knotted within a few points of one another for second place behind Trump. No candidate has thus far emerged as the consensus favorite of the anti-Trump, anti-Cruz party establishment, and if that vote remains split heading into New Hampshire, the chances of stopping Trump or Cruz diminish significantly. Rubio is best positioned to be that consensus candidate, but as Lindsey Graham’s endorsement of Jeb demonstrates, the party is not ready to get behind him yet. The longer that dynamic holds, the better the outlook for Trump and Cruz.