Rubio's struggling to get any kind of edge, so he spent the GOP debate trying to win over conspiracy nuts 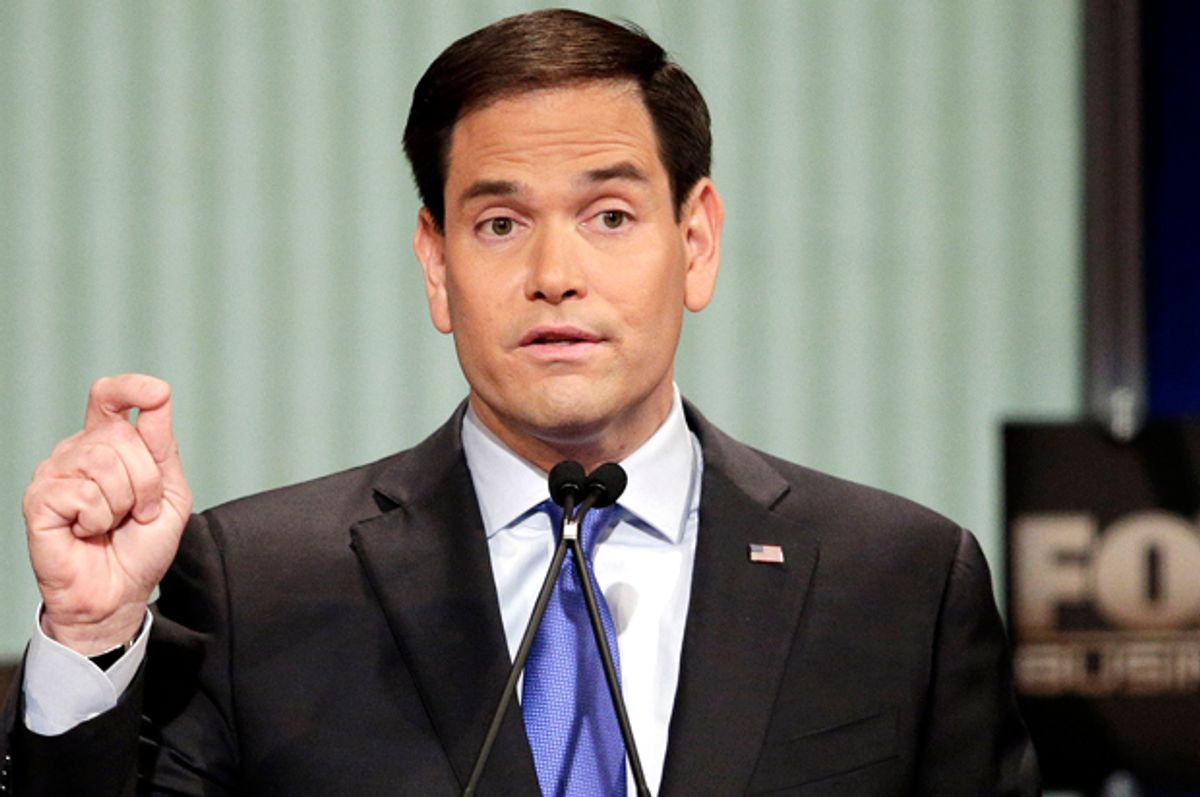 Marco Rubio's campaign strategy to win the primaries has been a straightforward one: Present himself as an amiable guy with moderate impulses who can win a general election. It's a total lie, of course. His real life positions are far to the right, even by the increasingly low Republican standards. Even his supposedly "moderate" stances — such as support for clean energy — are straight-up lies. But his amiable frat boy act is convincing enough to paper over this.

But his position as the electable one just isn't doing it for Republican voters. Right now, at least, conservatives just want to be free, man, to drop all those masks and let their true selves shine. And those true selves are bitter, irrationally angry people, and not amiable frat boys. Rubio's "at least I'm not crazy" act is being read this year not as sensible politics, but a buzzkill, leaving him stuck in third place in the polls.

So Rubio spent the Thursday night's Republican debate on Fox Business Network showing a different side of his personality: The wild-eyed conspiracy theorist. His performance was a naked grab for the Jade Helm vote. While Trump and Cruz bickered over whose birthplace is the more shameful, Cruz rolled out a couple of major conspiracy theories that were paranoid enough to earn him a spot on Alex Jones's radio show, if he wants it.

The first conspiracy theory was rolled out during the contest to see which candidate pees the bed most at night when thinking about how ISIS is coming to get you. President Obama attempted to counter fears during his State of the Union Tuesday night by hosting a refugee, Refaai Hamo, who has a PhD and was working as an engineer in Syria before his own government blew up his family, killing his wife and 6 other family members.

But Rubio was not having any of these attempts to make you believe that Syrians are people just like you and me. And so, in a clear answer to Obama, he issued this paranoid diatribe during the debate:

There is a radical jihadist group that is manipulating our immigration system. And not just green cards. They're looking -- they're recruiting people that enter this country as doctors and engineers and even fiancées. They understand the vulnerabilities we have on the southern border.

They may look like middle-aged widowers who are trying to piece their lives together after unimaginable tragedy, but they are secretly agents of evil.

The "fiancées" line was an obvious attempt to link not just refugees but immigrants generally to the San Bernardino shooting. But that shooting, perpetrated by a native-born citizen and his immigrant wife, is not evidence of some grand ISIS conspiracy to smuggle terrorists in through subterfuge. All the existing  evidence shows that the shooters were more like the UVA shooter or the Isla Vista shooter---they had an ideology to justify their behavior, but they were self-directed, instead of working with a larger conspiracy.

More importantly, as Politico's fact checkers point out, ISIS's efforts to recruit doctors and engineers are in direct opposition to the picture that Rubio painted. They want these folks to come to them, not to leave to Western countries. They are trying to build an Islamic state and are in desperate need of educated professionals who can help make that happen. To say otherwise, and to sow paranoia that your friendly neighborhood Muslim doctor is secretly an ISIS agent, is pure conspiracy theory-mongering.

But that wasn't the only direct appeal to the birthers and survivalists. Rubio also went hard after the Infowars crowd by pandering to their favorite conspiracy theories regarding Obama and guns.

The gun fondlers of America are best understood as a religious cult, specifically an apocalyptic one, except their expected apocalypse isn't Jesus returning or the Martians beaming everyone up, but the day the jack-booted thugs kick in the door and take all their guns. Like all good apocalypse cults, the fact that the predicted apocalypse keeps not happening doesn't sway the belief that it's coming any minute now. Seven years of Obama not taking your guns doesn't mean he hasn't been formulating his evil plans all this time! And Rubio's here to remind you that D-day is right around the corner, unless you vote for him.

Rubio's pandering to the nuts isn't limited to lovingly massaging some of their stupider conspiracy theories, of course. He also played to the sadistic fantasy that you can beat the truth out of people, spinning out an erotic tale of how he was giving ISIS fighters "a one-way ticket to Guantanamo Bay, Cuba, and we are going to find out everything they know." Hey, tying someone to a chair and lingering over them, sweaty and panting, with a knife in your hand until the truth comes gushing out in waves works on TV. Of course it's going to work in real life, which is also TV. He's sure of it.

It perhaps shouldn't be a big surprise that Rubio is laying it on thick for the fantasists. A huge chunk of the Republican base is composed of people who live in imagined worlds of conspiracy theories and televised fantasies about the effectiveness of torture. Poll numbers show that Republican voters are more interested in having their delusions validated than winning elections right now, and Rubio is adjusting accordingly. Whether it will work at this late date remains to be seen.