Rachel Maddow confronts Hillary Clinton over her campaign's negative turn against Bernie Sanders: "Your campaign, in my estimation, set its hair on fire" 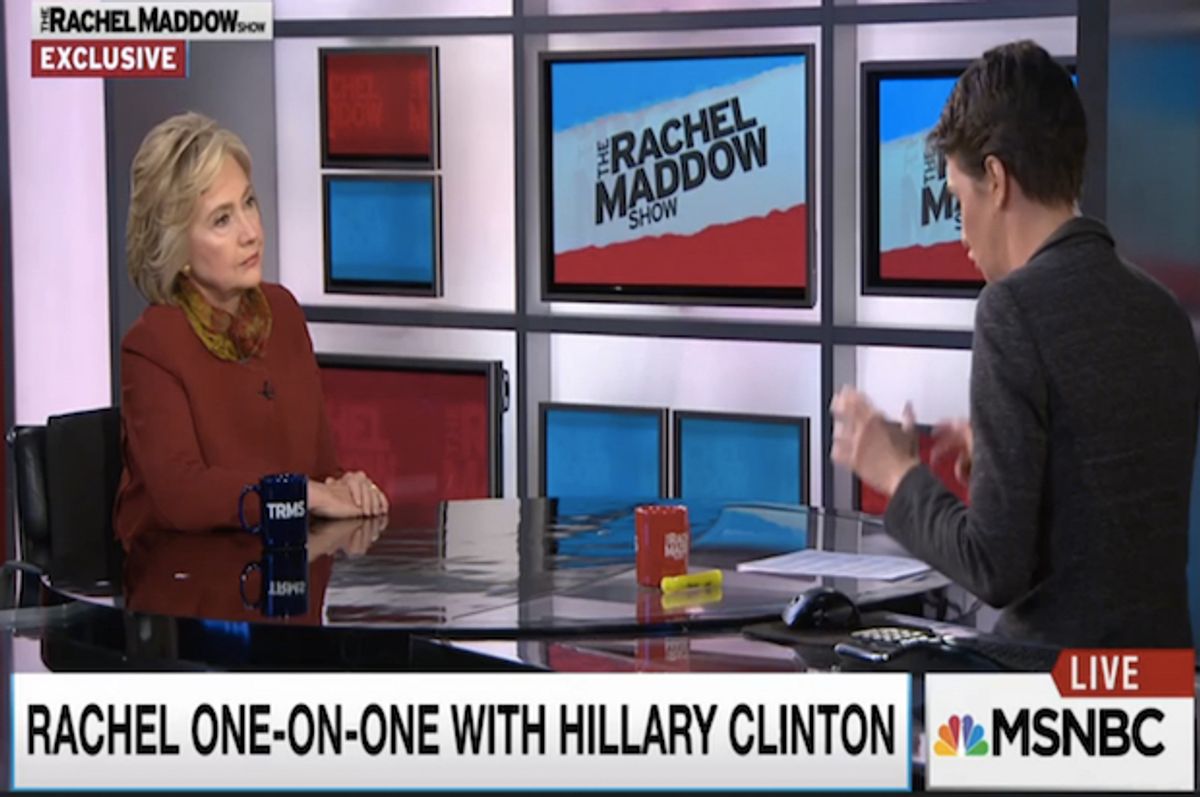 While the Republican presidential candidates were participating in, yet another, mindless recitation of right-wing talking points intermingled with attacks on President Obama over on the Fox Business debate stage in South Carolina, MSNBC host Rachel Maddow interviewed Democratic presidential candidate Hillary Clinton last night, grilling the erstwhile frontrunner about her recent campaign decision to directly go after rival Bernie Sanders.

"Your campaign, in my estimation, set its hair on fire a little bit," Maddow told Clinton, assessing the decision to cast Sanders' latest campaign ad as his first negative ad of the campaign to be a bit of a reach with only days to go before the first votes of the cycle.

"Now, I’ve seen the ad that you’re referring to. Honestly, it is not much of an attack," Maddow argued, noting that the Sanders ad never mentions Clinton by name.

"It says there’s two Democratic visions for regulating Wall Street ... It’s not something over the top that means that he’s now this personal attacker in the campaign," she explained.

“There are two Democratic visions for regulating Wall Street,” Sanders opens in his new 30-second ad airing in Iowa and New Hampshire. “One says it’s okay to take millions from big banks and then tell them what to do. My plan: break up the big banks, close the tax loopholes, and make them pay their fair share."

Clinton pushed-back against Maddow's dismissal of Sanders' ad as an attack, noting that his critique that Wall Street donations leave a candidate impotent or corrupted when it comes to oversight is the same charge that was thrown at President Obama.

"I mean basically it’s also a very direct criticism of President Obama who, as you might recall, took a lot of money from the financial industry when he ran in 2008," Clinton explained. "That didn’t stop him from fighting for the hardest regulations on Wall Street since the Great Depression, signing Dodd-Frank, getting everything he could get out of the Congress at that time."

"So it’s a funny kind of charge," Clinton said of her opponent's latest campaign ad. "It’s sort of a pox on all your houses for all the Democrats."

But Maddow continued to press Clinton on her campaign's handling of Sanders, whom Maddow described as "a very well respected figure" who "also doesn’t have an enemy in the world in the Democratic Party."

"Your campaign is essentially fighting with him in a way now that is casting aspersions on his character, calling him dishonest," Maddow charged.

"Sanders is basically doing better than you with the same groups that powered President Obama’s victory in Iowa in 2008, mainly young people, first-time caucus goers and Independents," she continued. "[D]on’t you need to change what you’re doing to try to crack the code of those kinds of voters?"

Watch Clinton's response to questions about her strategy to beat Sanders as well as whether she agrees that single payer is a "good" vehicle to achieve universal health care, via MSNBC: