The stunning irrelevance of wing-nut billionaires: Why Bernie's riding high while the Koch Brothers collapse 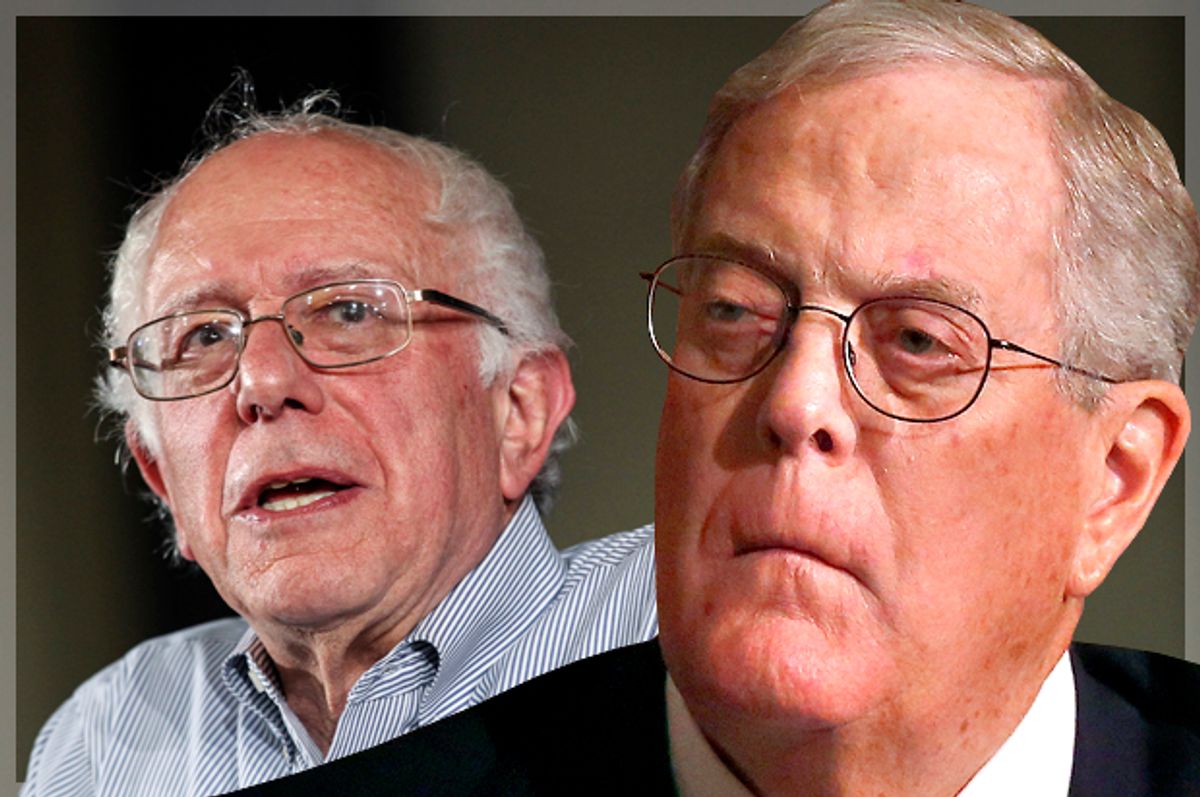 Let us pour one out for the poor millionaires and billionaires bemoaning the lousy returns they are getting on their investments in presidential candidates this election cycle. This week The Hill ran a story entitled “Upset Republican donors: Have we wasted our money?” I dunno, fellas. Did you spend it on several million Powerball tickets?

The thrust of the story is that despite all the money wealthy Republican businesspeople have shoveled into super PACs supporting their chosen candidates, many of said candidates are lagging in the polls or dropped out of the race early. Right to Rise USA, the super PAC supporting Jeb Bush, infamously raised $103 million by the middle of last summer in large part because Bush was considered a near shoe-in for the nomination by much of the GOP’s moneyed class.

But Bush has run a particularly sodden campaign that has left him languishing at around five percent in the national polls, far behind Donald Trump and Ted Cruz. Meanwhile, that $103 million is being funneled into making some of the most insipid, childish and worthless television ads since toy companies discovered Saturday morning cartoons. His opponents have not done much better. This has been particularly galling to anyone throwing money at the so-called establishment candidates, who for all the money spent on them so far, are currently fighting to see who can finish a distant third in Iowa and New Hampshire.

This story comes on the heels of a hilarious Financial Times interview with Charles Koch, in which the billionaire complained about the diminished influence of money in politics:

He says he is “disappointed” by the current crop of Republican presidential candidates, and resigned to having to support one with whom he agrees on only some issues. “It is hard for me to get a high level of enthusiasm because the things I’m passionate about and I think this country urgently needs aren’t being addressed.”

The Kochs’ political machine has presented all the candidates with a list of issues it wants on the agenda but, says Koch, “it doesn’t seem to faze them much. You’d think we could have more influence.”

Nine hundred million dollars – the amount the Kochs expect to spend trying to influence this year’s election – sure doesn’t buy what it used to. It’s as if the conservative political network of think tanks, nonprofits, publications and other assorted ephemera is just a giant grift designed to suck money out of donor pockets so people like Jonah Goldberg or Bill Kristol can have a publishing platform.

This is not to say that the problem of big money in politics has suddenly become moot. Plenty of it will still get thrown into the downballot election campaigns that will likely send a fresh crop of wingnut charlatans to Congress and into state legislatures and governors mansions around the country. Sheldon Adelson is still lurking out there deciding which Republican he’ll throw his support to. In 2012 it was Newt Gingrich, and Adelson’s money had the hilarious effect of keeping the important issue of moon colonization alive in the GOP primary for a few extra weeks. This time around, with the Middle East blowing up and Adelson’s pet issue of the Israeli-Palestinian conflict more intractable than ever, his money has the potential to support a more dangerous demagogue deeper into the primaries.

And this is to say nothing of Donald Trump, the deep-pocketed nut of a front-runner, who can be his own super PAC for as long as he wants, if he decides to stop running his campaign on the cheap and get a little more organized. Though why bother yet, just being Donald Trump and utilizing all the media attention that comes with that has worked for him so far.

There are plenty of reasons why these wealthy donors are seeing their money become more worthless than if they had simply let the Joker set it all on fire. It is no secret that the Republican candidates are terrible, awkward, shrill, and poor leaders to boot, whose constant negativity and fear-mongering have made them look small. No amount of money can help that.

But one wonders if conservative donors will in the future take a lesson from the Democratic side, where Bernie Sanders is making plenty of noise without a super PAC or deep-pocketed billionaire backers. Having a smaller field of competitors has helped, of course. But it has also meant the Democratic contenders can fight over policies, instead of having to spend most of their time beating each other up on personal terms. Maybe they will recognize that in a time of widespread disgust with our politics and fearfulness at world events, ideas, not demagoguery, still matter.

In that case, maybe the infamous Citizens United case that unleashed much of this money into politics will have had an important effect by showing that if you get a little complacent about political messaging, you can inspire a backlash from the voters. So maybe it’s better to try and inspire people rather than lazily bombard them with hackily-produced bullshit.

Or maybe the billionaires will decide the problem is that they haven’t yet spent enough money and redouble their efforts to get their pet candidates elected. In which case, get ready for a bunch more commercials about Marco Rubio’s boots.