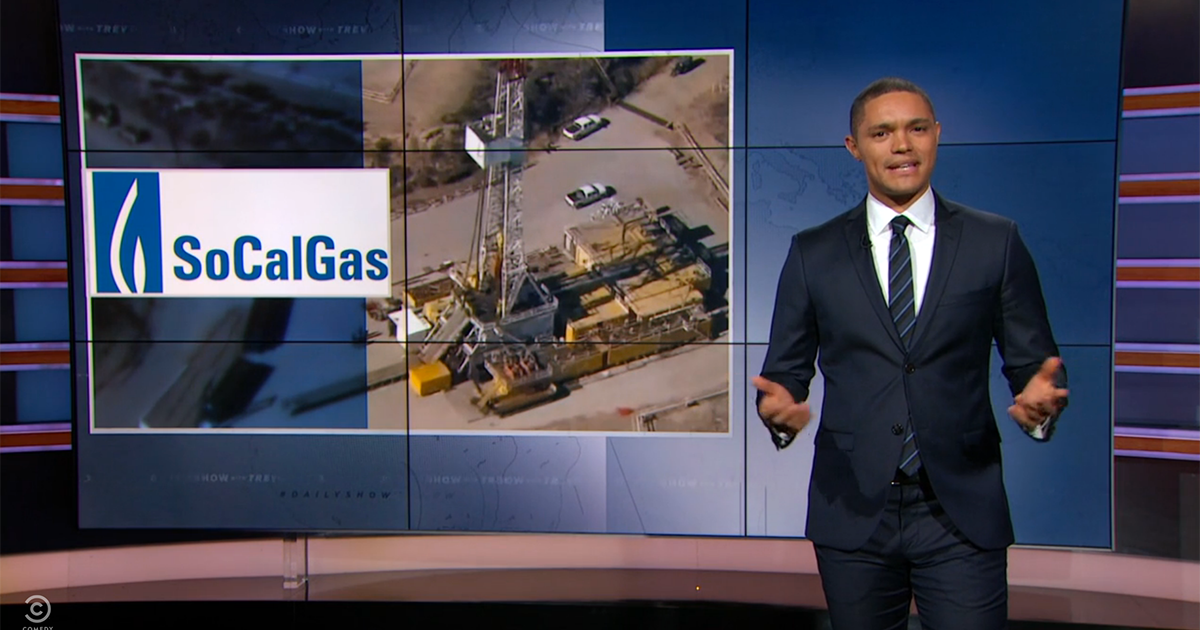 Flint, Michigan, isn't the only place in the United States where people are being subjected to an obscene amount of dangerous pollution. According to Thursday's "Daily Show," the neighborhood of Porta Ranch in Los Angeles has become so toxic due to a company's methane leak that it is the equivalent of 7 million cars driving through.

The leak is so bad it has become the single worst climate polluter in California, which is amazing, Noah said, because he knows for certain there is a lot of smoke being blown up people's asses in Hollywood. It's true, and like Washington, D.C., the government doesn't regulate bullshit as toxic waste either.

"This is where the presence or absence of government oversight comes in," Noah said. "California regulations allowed SoCal Gas to play fast and loose with safety equipment." It turns out, thirty years ago a safety valve was taken off and SoCal Gas said it was too hard to find a replacement part, so they never replaced it. Now, thousands of people are sick and being displaced and it's an environmental disaster that they might not be able to fix until late March.

Noah also brought up the water crisis in Flint that has been going on for the last eight months. "I have a rule," he said. "If the water is browner than me, I don't drink it." Fair.

This disaster happened much in the same way. Cutting costs lead to people no longer getting pre-treated water from Detroit and instead sucking it out of the super-polluted Flint River. The corrosive water meant that lead pipes started to corrode which led to the lead poisoning the city is now facing. Ultimately, a state of emergency has been called it's so bad, but the politics around it are much worse.

"Do you see how crazy this is getting now?" Noah asked. "To save money, they stopped getting treated water, they went with a cheaper water that burns through lead pipes to save money. Really? That's like saying, 'an airbag? What? Am I made of money? I'll just drive around with a bunch of party balloons!"

This while city and state officials lied to residents for a year telling them that the water was safe to drink. The mayor is no longer in office, but Governor Snyder sure is.

Check out the shocking video below: