Don’t feel guilty about buying used books: Writers won’t see a dime of that sale, but it’s the long game that counts 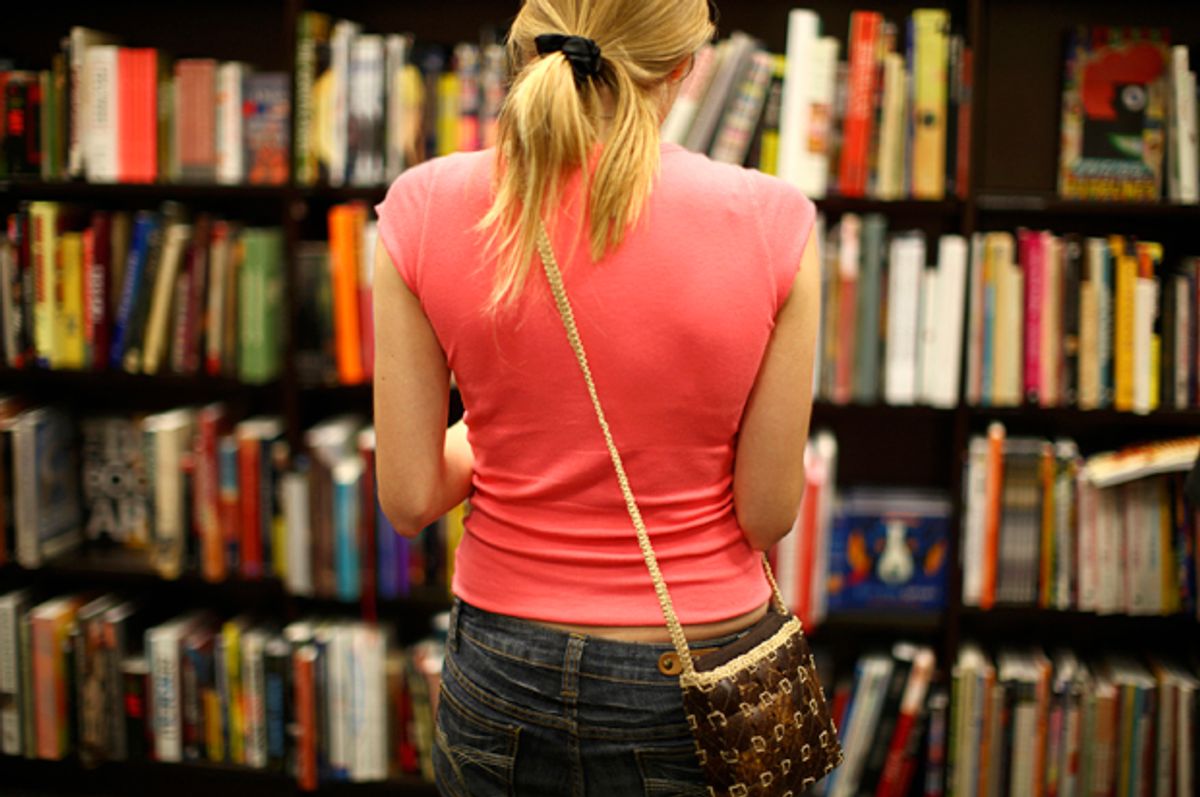 Recently, writer Kristen Lamb came out swinging in a blog post lamenting that her fellow authors were eager to applaud the longevity of used bookstores, as detailed in a recent Washington Post article. Lamb was blunt about the economics of how authors earn a living: “Want to support a writer in the new year? BUY BOOKS. Writers are NOT PAID for the purchase of used copies.”

She went on to say she puts her money where her words are, and backs up her industry with her dollars. “As a professional, I treat my fellow writers-at-arms the way I want to be treated. I do not buy used books as a first choice. If I DO happen to buy a used book, I make sure to purchase at least a digital copy so that writer is PAID for his or her hard work.”

No one can argue with the facts Lamb lays out: Writers get paid when a new copy of their book is purchased in a brick and mortar or online store, and may get paid when their book is checked out of a library, depending on their contract terms. With libraries, at the very least, the number of requests and checkouts is carefully tracked. With used bookstores, authors don’t see a dime directly from the purchase, nor can they find out how many people have purchased their books.

However, that doesn’t mean that used bookstores are therefore taking money from writers’ pockets, or that shopping in them is akin to piracy and hurting authors’ careers, as Lamb suggests. She’s right that consumers do need to be educated about how their art gets made, and what the real costs involved are. As YouTube vlogger Gaby Dunn so aptly detailed in her Fusion article on the precarious economics of video income earnings, those who consume creative products should be aware of how its creators get paid. That’s a first step toward supporting the work of the writers (and musicians, filmmakers, vloggers, etc.) you want to keep on creating. We may get into writing for the love of it, but it’s also our job. Nobody is arguing with Lamb that writers don’t deserve to be compensated.

However, the issue of used bookstores isn’t as black and white as paid vs. unpaid, the dichotomy Lamb sets up. First of all, those buying books in a used bookstore may not be able to afford a new copy. They also may not know that new copy exists because they’ve never heard of a given author before. Used bookstores can afford to be more varied in what they stock, thereby giving customers plenty of options, while shelf space is in higher demand in new bookstores. I’ve discovered plenty of series mysteries in used bookstores, then gone on to buy more in that same series at full price. As the Washington Post put it, “nothing provides a stronger pull than the experience of browsing — getting lost in the stacks, making serendipitous finds, having chance conversations with interesting people.”

Lamb also ignores the synergy between print books and other platforms an author may have. The last time I was in a used bookstore, Bruised Apple Books and Music in Peekskill, New York, I spent almost an hour picking up titles and scouring their offerings while my boyfriend looked at records. Eventually, I noticed Karen Alpert’s book of parenting essays, "I Heart My Little A-Holes." I sat down in a conveniently placed chair and read many of them; when I got home, I subscribed to her blog, Baby Sideburns, a blog I would not have known about save for stumbling upon this title. Maybe someone will find a used book and go on to read everything that person has written, or follow their blog, listen to their podcast, follow them on Twitter, attend a reading, tell others about the book, etc. Yes, authors are paid via book sales, but it’s very likely they may have other income streams as well. They aren’t necessarily staking their entire future on one title; instead, each title is one piece of a sprawling pie.

During that hour in Bruised Apple, I noted several books I didn’t want to buy at that moment but might want to check out of the library at a later date, jotting down the titles in my phone. Used bookstores are not the end point to a reader’s journey, but often the starting point, not to mention that they are often treasure troves of out-of-print books, many of which might not exist in e-book or audiobook form.

As someone who earns about half my income from sales of anthologies I’ve edited, I absolutely get where Lamb is coming from. Of course this feels personal when every sale, and every dollar, counts. Lamb is absolutely correct that, “If you don’t support the little guys they won’t be around.” Writers can’t afford to create books for free. But readers don’t just buy a single book once; the most avid read many books in a year, and seeing or buying a book in a used bookstore may be the start of buying others in digital or print form down the road.

I asked some writers I know what they think, and none were as strident as Lamb. Greg Olear, author of the novels "Fathermucker" and "Totally Killer," said this isn’t an either-or situation. “Do I gain financially when someone buys one of my books new as opposed to used? Yes—although in my case, and in the case of many non-best-selling authors, the money I make on that sale goes towards a (modest) advance that will likely never be paid back. But I think it's more likely that someone will either buy my book used, or else not read it at all. It's not about new vs. used. It's about used vs. no sale at all. To most buyers, I think that's the real choice,” Olear explained, noting that, while he’d obviously prefer the new sale, “I want people to read my book, first and foremost.”

Cindy Pon, author of young adult novels "Serpentine," "Silver Phoenix" and "Fury of the Phoenix," acknowledged that as a former midlist and current small press author, “It honestly feels like every book sale matters.” But despite that, she added, “I love libraries and used bookstores. I find both are accessible, and an alternative for people who might not be able to afford full price titles. It gives readers a chance to come across novels they might not have otherwise discovered, including older books. I personally have shopped at used bookstores, and although I know that my money will not go directly to the author, I consider it giving books a chance to be ‘rehomed’ and find new readers. I am not at all bothered by readers who buy my titles secondhand.”

Robin Epstein, author of 21 books ranging from novels, middle grade advice, nonfiction and children's books, said that while she was dismayed to see copies of her latest novel, "H.E.A.R.," being sold used within weeks of publication, she understands and even encourages used bookstores, which she herself shops in. “I want my books read as widely as possible, but I know the price of a new book can be prohibitive. Libraries and used bookstores are wonderful resources for this reason and democratize reading, which is something I not only consider a pleasure but also a necessity.” Epstein doesn’t see those who shop at used bookstores as cutting in to potential sales of her titles. “I certainly understand Lamb's concern for her bottom line, but I think the argument is specious,” Epstein explained. “There will always be people who want to buy new books, just as there will always be people who line up to see a movie on its release day.”

Mystery author Rob Hart, whose first novel, "New Yorked," was published last year, said, “I've always loved used bookstores, and it'd make a hypocrite to come down on them now that I have a book out. I just hope for the best case scenario, that someone finds a book I wrote, reads it, liked it, and looks for more. It sounds cheesy, and it won't pay my daughter's eventual college tuition, but it's true: I'm happy to be read.”

As for Lamb’s linking of used bookstores and piracy, romance novelist Tiffany Reisz, author of the bestselling "The Original Sinners" series, had strong words. “Buying a used book is no more piracy than buying a secondhand Christmas sweater at Goodwill. Piracy is more like stealing a new book off a bookstore shelf without paying for it. Every book in a used bookstore has already been bought and the author has received royalties for it.” Reisz, who partnered with new and used bookstore Jan’s Paperbacks to sell signed copies of her books for the 2015 holiday season, was emphatic that used books are akin to any other item that’s resold. “I'd no more apologize for buying a used book than I would for buying a used car."

The common thread: Used bookstores are not the enemy. This mind-set was summed up eloquently by Neil Gaiman, who posted a quote by him on his Tumblr two days prior to Lamb’s post that addressed this very topic, stating in part:

Don’t apologize to this author for buying books second hand, or getting them from bookcrossing or borrowing a friend’s copy. What’s important to me is that people read the books and enjoy them, and that, at some point in there, the book was bought by someone. And that people who like things, tell other people. The most important thing is that people read.

Now, it takes a certain degree of financial privilege to be able to say, essentially, that buying a book used or new doesn’t ultimately matter to a writer. But there’s a middle ground between not caring where someone purchases your titles and Lamb’s excoriating tone that faults authors for not pushing readers to buy books new when she states [emphasis hers], “And if we ARE going to promote used bookstores (which IS fine) then by GOD educate readers and ask for the sale. Let them know that you will not be paid off that sale and to please also buy a full-price version if they like your book.”

Used bookstores are not trying to put authors out of business; they are trying to provide books for eager readers who, as the Washington Post noted, very likely may not even have the option of a new bookstore anywhere nearby. Assuming that used bookstore owners are out to take money from authors’ pockets is an extremely cynical point of view. Whenever I’ve chatted with used bookstore owners, their book knowledge runs deep. They care about books, readers and, I would imagine, authors continuing to write, even if their specific sale is not lining an author’s pockets in cash.

Lastly, as someone who’s moved four times in under four years, I’ve had to donate hundreds of books to places like nonprofit used bookstore Housing Works and Goodwill. If someone were in a similar boat and had copies of my books they had to get rid of, would I rather they trashed them or gave them to a used bookstore where someone else could appreciate them? I hope the answer is obvious.