"Believe me, if I could say 'liberal Jews', I would": "Saturday Night Live" nails Ted Cruz's attack on so-called "New York values" 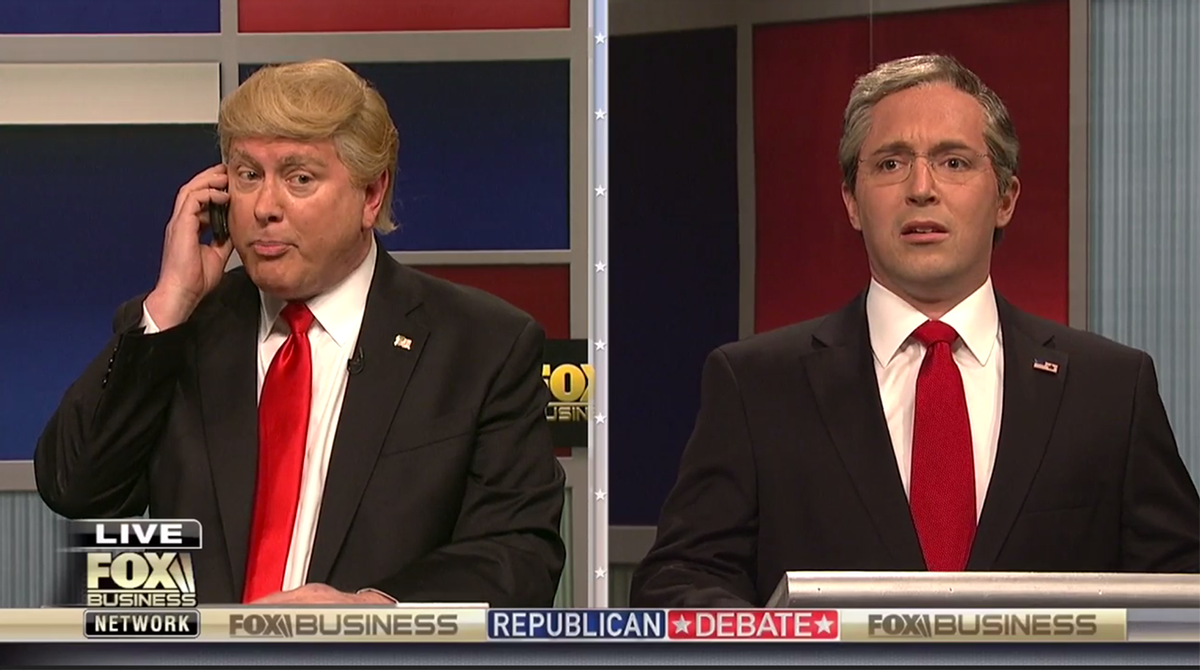 Saturday Night Live was merciless in its mockery of the 6th Republican Debate that was on Fox Business News on Thursday. The cold opening of the show featured Fox moderators claiming that if at any point poll numbers dropped during the debate a loud gong would sound and they'd be pulled off stage. If only the real debates were like that, maybe more people would watch.

We got more of Darrell Hammond as Donald Trump, who started off the debate simply stating that other people are the ones hurling accusations about Ted Cruz's Canadian roots. Taran Killam nailed it as Ted Cruz, complete with the nasal voice that sounds like shards of glass being dragged across the chalkboard. "Clearly I am not Canadian" Ted Cruz explained. "Canadians are well liked. I am noooooot. Canadians are rugged and outdoorsy, where I myself am mostly made of pudding. Canadians are genuine and warm whereas when I smile, it looks like I'm peeing," all very true.

Even Chris Christie wasn't safe. The moderators would only let him answer if he could manage to actually answer the question instead of turning it into an attack on Barack Obama. He couldn't' do it. "This next question is for Jeb," the moderator said. "It is?!" Jeb said excited and surprised. "Wait, no, I'm sorry it says, Ted." Ouch! "Awwwwwww....." Jeb said sad and bouncy in disappointment.

Of course, SNL had to go after Ted Cruz's viral statement about New York values. "I think most people know exactly what New York values are," he began. "And, frankly, they are not the rest of the country's values. Instead of celebrating Christmas, New Yorkers celebrate a Pagan holiday called Festivus. Instead of watching American football, they challenge each other to masturbation contests. In New York, people don't say hi to their neighbors, they say, 'hello, Newman...'" The moderators were confused saying it sounded an awful lot like he was talking about the TV show Seinfeld. "Believe me, if I could say liberal Jews, I would."

Then it was time for Jay Pharoah's too short yet flawless and hilarious portrayal of Ben Carson. In the end, as the moderators said, they would swoop someone off stage if the poll number dropped too low. Chris Christie was the victim. Finally. Check out the rest in the video below, including Donald Trump getting a phone call about Jeb Bush.