Rubio is trying to save his campaign by talking about God. We ought to be terrified if he means what he says 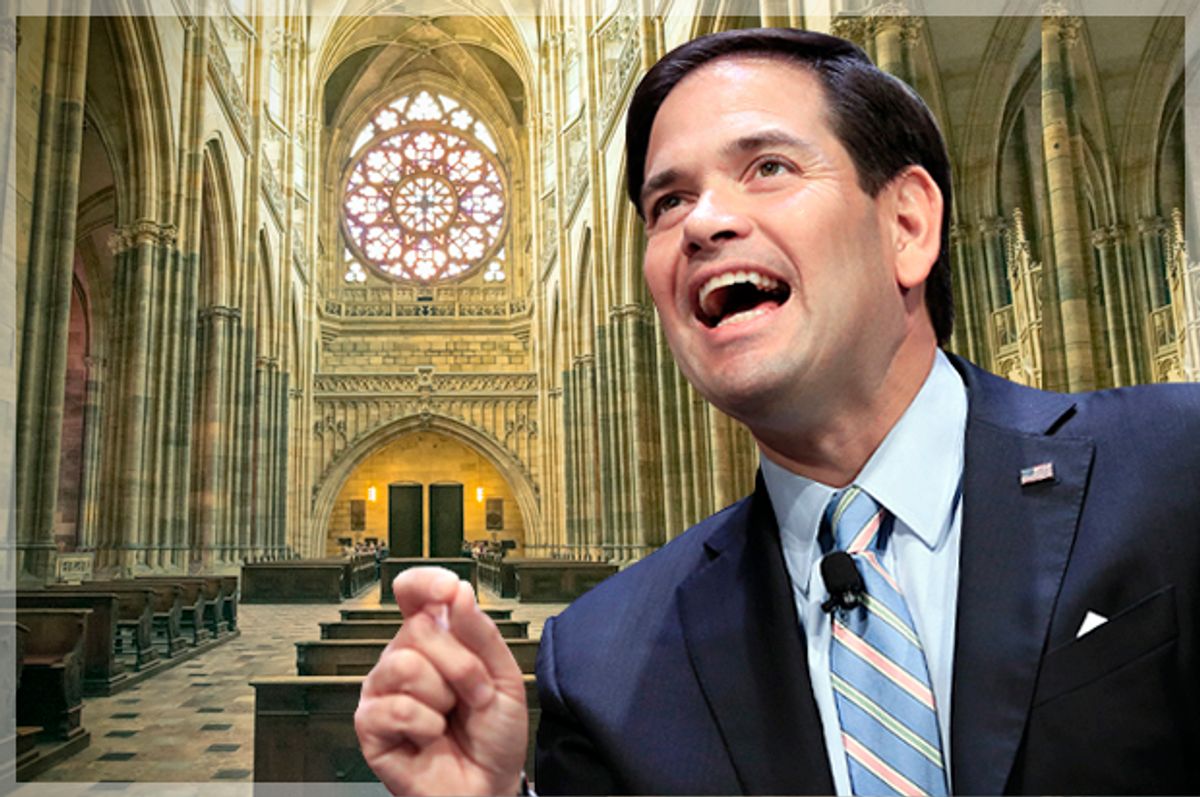 One of the most annoying things about religious folks is that they just cannot keep their “good news” to themselves.

Not two weeks into the new year, the frocked and beanied capo dei capi of the Catholic Church, Pope Francis, chose to impose upon humanity a book of his own authorship, “The Name of God Is Mercy.” The title alone should have given reviewers cause to dispatch the tome, unopened, straight into the waste bin. “Mercy?” From a purportedly omnipotent Lord who chose to sire a kid whom He subjected to ghastly tortures culminating in execution? Who battered and abused poor Job on a whim? Who ordered a patriarch to knife his own long-awaited son? The name of God, were God to exist, would be anything but mercy.

In any case, do we really want to hear about mercy from the Pope, who, phony liberal pretensions notwithstanding, oversees an organization whose “men of the cloth” have, for so long, and so mercilessly, subjected the youngest and most vulnerable of their parishioners to rape and other varieties of sexual abuse that they may well be guilty of torture? (A United Nations committee is investigating this.)

Yet we can choose to ignore such papal dreck. Not so with the theocratic strivings of members of our own judiciary, which may, depending on who wins the White House later this year, eventually impinge on our lives through Supreme Court rulings. As Sean Illing recently pointed out for Salon, Supreme Court Justice Antonin Scalia kicked off 2016 by delivering a speech in which he snatched the credit for our country’s battlefield victories from our ancestors and awarded it to the Almighty, as if He doesn’t already get enough praise. Worse, Justice Scalia informed us that the secularism upon which the Founding Fathers established our Republic has lapsed. Funny no one else seems to have noticed.

Then there’s the irrepressible faith-mongering Alabama Chief Justice Roy Moore, who won notoriety for his efforts to block same-sex marriage in his state last year. Well, he has now chosen to disobey the Supreme Court’s ruling legalizing gay matrimony by intervening with an administrative order prohibiting lower-court judges from issuing same-sex marriage licenses. His argument remains the same as before: God’s law trumps U.S. law.

There is no legal ambiguity in either case. Could senility be addling the already faith-attrited cognitive faculties of these judges? (Scalia is 79, Moore, 68.)

Moreover, faith-derangement syndrome afflicts the undeniably young and intelligent, and most notably, among the Republican contenders for the White House, Senator Marco Rubio. Rubio once converted to Mormonism but currently two-times with both the Catholic Church and the extremist, anti-gay, pro-exorcist Christ Fellowship. He has just put out a television campaign ad entitled “Marco Rubio on His Christian Faith.”

As a pianist taps out a somniferously bland tune that would befit an ad for a last-rites parlor, Rubio, seated against a dark backdrop, explains the delicate balance he strives to achieve in melding his faith and career as a lawmaker, as well as offering detailed, faith-inspired plans for governing the United States in a time of international turmoil and domestic discontent.

No, wait! He leaves out the plans and turmoil abroad and the discontent at home. He uses his campaign ad to talk only about religion. Aren’t campaign ads supposed to at least have something to do with politics?

Anyway, let’s dissect Rubio’s message line by line. He opens with a statement that is presumptive, irrelevant to the office he seeks, theologically contentious, and tritely tautological.

“Our goal,” he says, “is eternity, the ability to live alongside our Creator and for all time, to accept the free gift of salvation offered to us by Jesus Christ.”

Our goal? Assuming Rubio is not using the “royal we” reserved for monarchs and other heads of state, he is, by speaking for the rest of us, insulting the growing atheist constituency in his electorate. We rationalists do not take lightly implicit charges of faith-derangement, which impute to our character and intellect multifarious defects (e.g., wishful thinking, a willingness to accept propositions without substantiation, the need to fear divine retribution to behave decently toward our fellows) from which we do not suffer. Whether the senator believes in such nonsensicalities is really none of our business: Article VI of the Constitution states that “no religious test shall ever be required as a qualification to any office or public trust under the United States.” There’s no need for him to drone on about his faith to the electorate.

And what about the (tautological) “free gift” of salvation? (Which gifts, Senator, do you have to pay for?) Admittedly, however, for those inclined to waste time scouring ancient texts for soterial truths, there is an issue to be explored here. The Mormon faith Rubio once dabbled in does mandate salvation by Christ. Per Catholicism, you’ve got to help Jesus boost you heavenward by slavishly obeying the Lord’s commands. Protestants generally abide by the sola fide principle, which proclaims that God-dispensed faith alone will get you into heaven. Rubio, in attending the Catholic Church plus the evangelical Christ Fellowship, has covered both bases. However, and more to the point, though, why should “salvation” be a matter for discussion on the campaign trail?

“The struggle,” Rubio then says, “on a daily basis as a Christian is to remind ourselves of this.”

Here he doubles down on his presumption, stressing, for those who missed it, the sectarian nature of his declaration. He is, after all, appealing for support to Christians alone – not Jews, not Muslims, not Buddhists or Hindus. The Founding Fathers, to thwart sectarian influence in governance, wrote the aforementioned Article VI. Sectarian pandering should play no role in running for public office.

Next: “The purpose of our life is to cooperate with God’s plan.”

What is the objective evidence for such a compendious assertion – for both the existence of a supernatural being named God, and for that being’s guidelines pertaining to us? Straightaway we can discount the Bible – a mishmash of texts authored during barbarous ancient times by unknown humans who knew nothing of biology, physics (Newtonian or quantum), the empirical method or a posteriori knowledge, or even why we should wash our hands after using the bathroom. We immediately reject “personal revelation” as unverifiable and subject to falsification. We exclude out of hand tradition and circumstantial justifications (you were born in a predominantly Christian country, therefore you are Christian). We refuse to fall for epistemological ruses that categorize truth as either “scientific” (subject to verification) or (a priori unprovable) “religious” – that is, supernatural or metaphysical. It boils down to this: We demand evidence – of both of the deity and his plan.

“To those who much has been given, much is expected and we will be asked to account for that, were your treasures stored up on earth or in Heaven.”

Hidden in Rubio’s use of the passive voice here is classic begging the question – taking as a premise that which you are asserting as a conclusion. In other words, assuming a divine “giver” and thereby ignoring the labors of his parents to provide him with a decent upbringing, and also his own efforts to succeed, as well as a complex network of contingent circumstances over which he had no control (place and date of birth, for example). A biographer seeking to explain Rubio’s progress from son of Cuban parents who departed their island under the Batista dictatorship in 1956 (and who did not flee the Castro regime, as Rubio once so self-servingly led voters to think) to presidential hopeful would set to work examining all these facts, not head to the pews to consult the Lord.

As for treasures, please, Senator Rubio, elaborate. Regarding specifically those treasures you have stashed in heaven – in other words, in the -270.45-degree-Celsius hard vacuum known as outer space – the IRS, along with the rest of us, will be curious to know how you transferred them up there, how you access them, and what the rate of return is. If you cite the Lord as broker and account manager, is He complying with new FACTA regulations (Foreign Account Tax Compliance Act) applying to banks abroad? If so, please have Him provide documentation, and append it to your tax returns, which we presume you will make public at some point. Now that might be proof of God’s existence!

Rubio closes with, “I try to allow that to influence me in everything that I do.” More begging the question. Enough noted above about that.

The crushing banality, the overwhelming unoriginality of everything Rubio says in his commercial evokes something akin to astonishment. Absolutely any convinced Christ-worshipper could have uttered the exact same words, which are nothing but boilerplate pulpiteer’s patter. That Rubio chose to speak thus before the camera shows just how abysmally low the expectations of the faith-addled are: proffer mind-deadening insipidities and sit back and await the hosannas and hallelujahs that are sure to issue from the segment of the public that will not think for itself, but has to be told fairy tales to feel comfortable about voting for a candidate.

It’s time we point out a few things to the senator.

To wit: Rationalists, Senator Rubio, find themselves compelled to draw disturbing conclusions from your ad. Children eventually stop believing in fairy tales, yet you persist in accepting the veracity of a book of fables, and, more problematically, you conduct your life in accordance with them. You choose to address a similarly deluded portion of your electorate, ignoring reasonable people and discounting their sensibilities. You present your faith in said fables as buttressing your qualification for the highest office in the land, at a turbulent time in history when the United States needs a serious, clear-minded adult commander-in-chief. All this says a lot about your judgment. To handle the crises we face, and those to come, we will need, most of all, a mature leader with keen, reality-based judgment.

You have, Senator, a constitutional right to profess belief in whatever you want. But you have no right to do so unchallenged by those tasked with ferreting out the truth and conveying it to the public. Unfortunately, though, you can broadcast such views throughout the land with little fear of being called out by journalists, who will shy away from religion as too sensitive and personal a topic.

Times are now too perilous for such squeamishness.

Rubio, Scalia and Moore have thrown down the gauntlet. Journalists need to pick it up – and fast.