America's hangover from hope: A look back at the historical state of the Obama presidency

After his final State of the Union, Obama's legacy is becoming clear. Some lessons for Bernie Sanders supporters 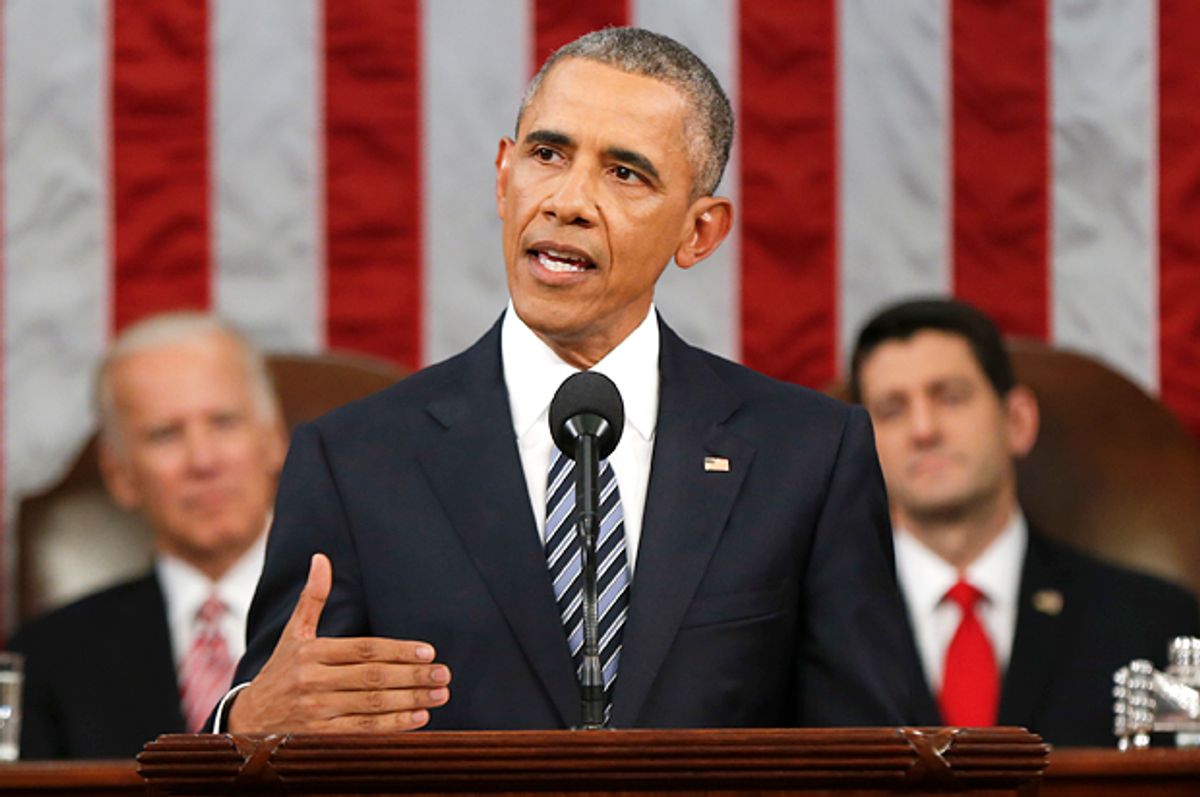 Since the day Barack Obama delivered the keynote address at the 2004 Democratic National Convention as a state senator from Illinois, his oratorical prowess has become widely known and celebrated (or, for many of those on the right, a subject of cynical contempt). It is a gift that helped the president in his meteoric rise, and one that no current presidential candidates seem even close to matching. So, then, it was not a surprise that the president gave an eloquent and inspirational speech for his final State of the Union address on Tuesday, sounding very much like the man progressives fell for back in 2008, and addressing everything from climate change to economic inequality to our broken political system. As with last year’s address, which had a theme of inequality and “middle-class economics,” the president tackled some of the most important issues on the minds of progressives (while also pleasing the centrists with praise for the private sector).

And with the rise of another underdog presidential candidate looking to repeat Obama’s impressive feat of stopping the Clinton machine back in 2008, progressives are beginning to feel as energized as they were when Obama was still a junior senator without a streak of gray in his hair. Sen. Bernie Sanders, I-Vt, is not a young man nor a supremely gifted orator, and he would be both the first Jew and the first self-proclaimed “democratic socialist” to be elected president, which would be quite historic in and of itself. (According to polls, his association with the word socialism is much more detrimental than his Jewish background or his apparent agnosticism.) But with new polling data released this week showing Sanders and Clinton neck and neck in both Iowa and New Hampshire, and a narrowing lead for Clinton among Democrats nationally, the feeling of déjà vu is becoming more and more apparent.

One cannot help but think of the optimism that Obama’s election brought seven years ago, and the many letdowns that have come since. As Obama discussed last week the various problems that also have helped Senator Sanders become a major force in the Democratic primaries, it was hard not to feel disappointed that, after seven years, economic inequality has steadily risen, the big banks have grown only bigger, hardly any villains of the financial crisis have been prosecuted, political spending has gotten more out of control, mass surveillance has become even more omnipresent, and the Obama administration has virtually waged a war on whistleblowers like Edward Snowden. As Sasha Abramsky writes in The Nation:

After almost two terms, there are many things that Obama could and should have done, but did not. Contrary to what many right-wingers still (incredibly) believe, Obama was never a leftist or socialist or even democratic socialist, and since entering office in 2009, he has governed like a centrist, preserving the status quo and keeping special interests relatively happy. (Many forget that some of Obama’s biggest contributors were Goldman Sachs, Microsoft, JP Morgan & Chase and Citigroup.) True, following two years of having majority control of both the Senate and House at the beginning of his term, Republicans have made governing increasingly difficult, and Obama would have no doubt accomplished more had he had support from Congress. But there is little reason to think that his administration would have been overwhelmingly progressive.

Consider Obama’s ardent support of the Trans-Pacific Partnership (TPP), the massive free trade deal that some have called “NAFTA on steroids” -- and also a “bill of rights for capital.” Like NAFTA, this deal is more about providing corporations and investors with increased rights than simply lowering tariffs and promoting trade. The TPP would greatly extend intellectual property rights so that corporations could collect more in rents, while also providing investors with the right to sue a country’s government if they deem that a new law or regulation has made their investment less profitable. (Tobacco company Phillip Morris has used a similar provision in other trade deals to sue countries for enacting plain-packaging laws). The deal is widely opposed by environmentalists, labor unions and progressive activists. And yet, Obama has fought hard for its passage. Very different from the 2008 Obama, who told an audience in Ohio: “I voted against CAFTA, never supported NAFTA, and will not support NAFTA-style trade agreements in the future.”

The Obama administration has left many progressives cynical about real change, and this is, perhaps, one of the reasons why Bernie Sanders has managed to put up a fight against the “inevitable candidate,” Hillary Clinton. Unlike Obama, who was young and relatively new on the national political stage when he became president, Sanders has been fighting for progressive ideals for many decades, and there is almost no chance he would suddenly become a status-quo-preserving centrist if elected president. Clinton, on the other hand, would almost certainly govern this way.

None of this is to say that the Obama administration has been a failure. It has many accomplishments, including Obamacare, the stimulus package, Dodd-Frank, the Iran nuclear deal, and more. After inheriting the worse economic crisis in eight decades, the economy has recovered, slowly but surely, and the deficit has been cut by two-thirds. But these have been the accomplishments of a centrist, not a progressive. (Obama arguably falls into the center-left of the political spectrum.) To think of how much more the administration could have done (or how much less, when considering mass surveillance or the drone program) leaves a lot to the imagination.

An important lesson that progressives should take from the Obama years is that you cannot rely on a single person or administration to change an entire system. Even if Sanders were to be elected (which is still, admittedly, a long shot), it would be extremely naive — especially after witnessing the Obama years — to think that he could “fix our politics,” as Obama put it in his speech, without a committed mass movement behind him (and not just a grassroots movement every four or eight years). The many letdowns of the Obama administration could easily fuel cynicism, but would it not be wiser to learn from them and push forward with a more committed and comprehensive movement?