The unbearable whiteness of Hollywood: The Academy should be ashamed—but the problem is bigger than the Oscars

For the second straight year, no performers of color have been nominated. Here's the real reason why 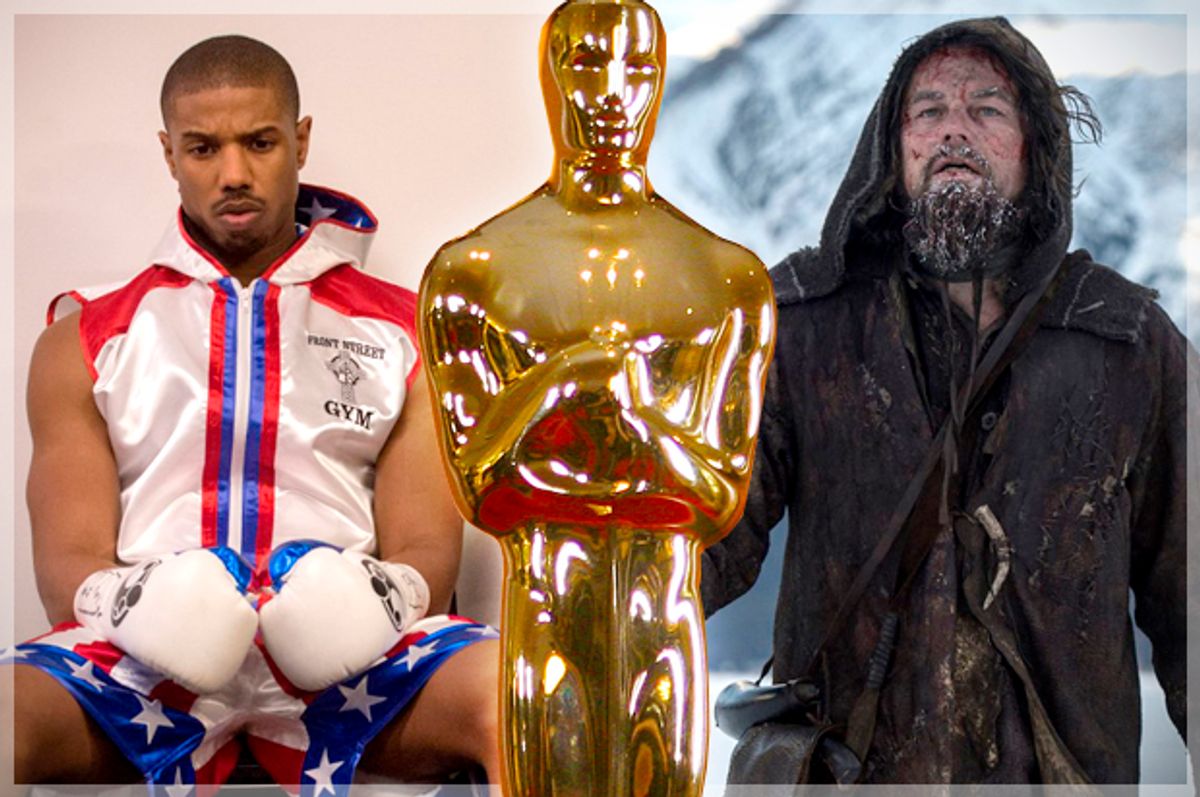 Here we go again. The Oscars have once more picked an all-white group of acting nominees. The #OscarsSoWhite hashtag has returned with a vengeance. Everyone is pissed off.

The Oscars deserve lots of blame for this situation, but the problems go deeper than one awards show. It's not just that movies like "Creed" or "Straight Outta Compton," or actors like Michael B. Jordan or Will Smith were snubbed. It's that, once you stop talking about "Creed" or "Straight Outta Compton" or Michael B. Jordan or Will Smith, you're not left with much for the members of the Academy of Motion Picture Arts and Sciences to choose from. The film industry itself is unbelievably white—and unbelievably male. This is a very long-term trend—a 2015 UCLA study showed that 73.4 percent of all the characters in the top 100 movies of 2014 were white—and it's not just black people getting stiffed. That UCLA study found that just under 5 percent of characters were Latino, despite the fact that Latinos have become possibly the most loyal moviegoing audience in the country. Academy voters should be ashamed for choosing an all-white field, but they should be equally ashamed to be part of an industry that so unerringly refuses to change.

What's behind all this? Let's call it one part economics and two parts institutional bigotry.

First, the economics: It's no accident that television's explosion of diversity happened at the same time that the economics of the business have morphed so much that it's hard to articulate what constitutes "television" anymore. The plunge in ratings, the rise of streaming and the insane proliferation of outlets spending money on original series mean that TV creators have the luxury of targeting smaller audiences than movies do, and of taking more risks. The prestige wing of the industry has also embraced the new platforms enthusiastically. Having a show on Netflix is now seen as equivalent to having one on HBO.

Movies aren't there yet. 2015 was actually the biggest year in both global and domestic box office history. That money, though, was generated on the back of a small handful of films—mostly thundering 3-D blockbusters that were easily exportable to every country in the world. More and more, the movie industry won't take a chance on anything but the seemingly surest bets, and until it sees a sufficient threat to its way of life, it won't veer from this path. What's more, the on-demand platforms that could potentially sustain smaller, more interesting films are still seen as second-class, meaning that they don't have a chance to break through in the same way that similar TV ventures do.

Here's where the bigotry part really starts to rear its ugly head. All too often, "risk-free" still means "white men." There remains a stubborn belief that movies about women or people of color won't "play" in the international markets that have become so important to sustaining the film industry. What's so infuriating about this is that, over and over again, movies about people of color or women that do get released make piles of money for the studios. It's institutional barriers, not box office clout, that are holding back more of these films.

Even when movies aren't expected to make a ton of money, the same rules still apply. Take another look at the 2016 nominations, many of which were given to smaller films. It's not like the chosen white actors were plucked out of diverse movies. With a couple of exceptions, all of the movies they starred in contain almost completely white casts from start to finish. (They're overwhelmingly male-centered, too: the most prominent female character in "The Revenant," which won the Best Picture award at the Golden Globes, is a bear.)

This is not too surprising when you consider that the Academy of Motion Picture Arts and Sciences, the group that decides who gets Oscars, is overwhelmingly made up of old white men, despite a recent push to inject the group with more diversity. Time and again, these voters have signaled what kinds of movies they go for. How could that not affect the kinds of movies that studios decide to make when they've got their eyes on awards?

TV has ruthlessly capitalized on the wasteland that the film industry has created for a huge swath of very talented people, and for the audiences hungering to watch them. To take just one example: As NPR's Gene Demby pointed out last year, black people watch far more television than any other group, and they watch a lot of it the old-fashioned live way. It's hardly a shock, then, that when networks began making shows like "Scandal" and "Empire" and "How to Get Away with Murder," there were audiences waiting for them. (And what do you know: White people watch too!) All of those shows feature incredibly gifted black women who had toiled in the film industry for years without ever being given anything like the opportunity to dazzle that they got on television. (Who can forget Kerry Washington's last major film role, as Jamie Foxx's nearly mute wife in "Django Unchained"?)

The upside of all this is that film—one of the greatest art forms ever invented, a medium that can create an almost unparalleled emotional and psychological connection with the viewer—gets progressively duller, more narrow and harder to defend. Hollywood risks creating a long-term crisis for itself if it continues to stubbornly cling to so many antiquated values.