They want to deny his humanity: Obama's tears, white rage and the right's phony new line 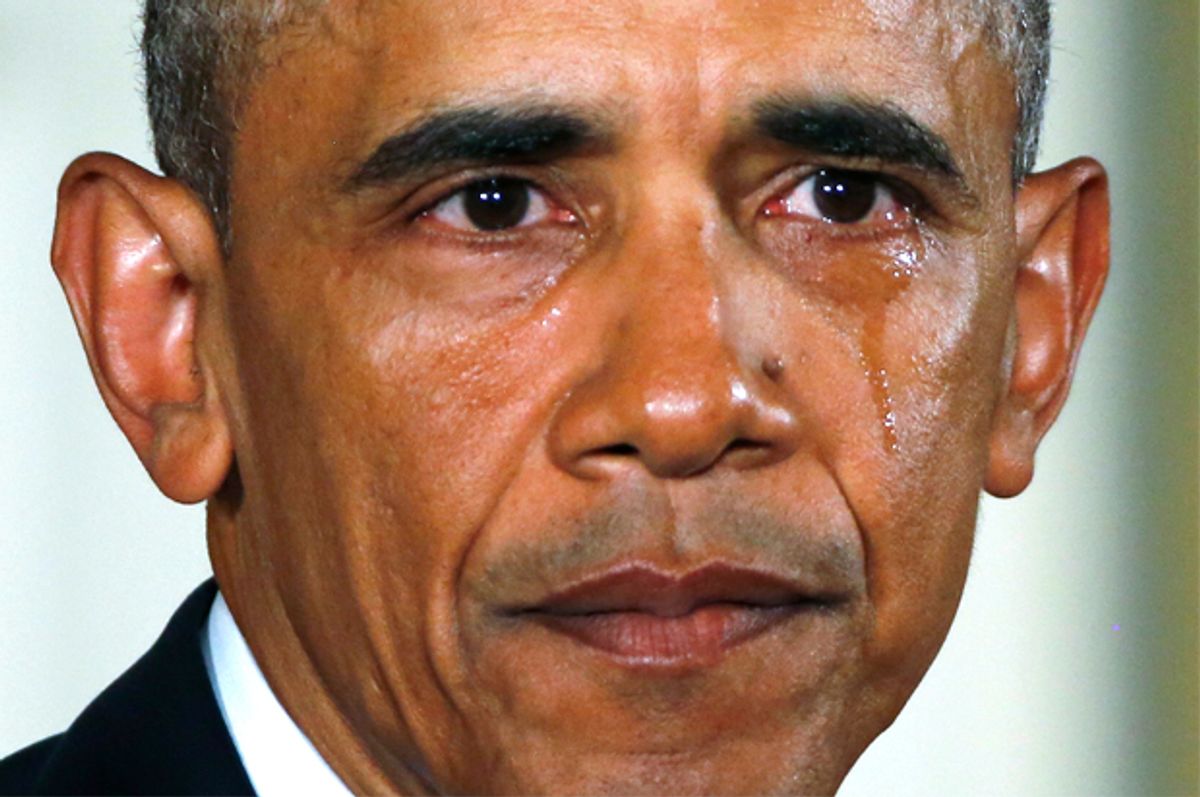 Barack Obama cried during a press conference about his new initiative to confront America’s plague of gun violence. The thought of the horrific murder of 20 children at Sandy Hook Elementary School--children whose bodies were blown apart, so defiled that some were left unrecognizable by their parents--moved him deeply.

Barack Obama is a fan of “Star Trek.” While President Obama is more like Mr. Spock than Captain Kirk, he will likely appreciate the following allusion.

“Elaan of Troyius” is one of the most entertaining episodes of the original “Star Trek” TV series. Its plot revolves around how Captain Kirk and his crew were tasked with bringing a beautiful—and insolent, rude and uncouth—princess to meet her future husband. Of course, there is a complication in the plan as she stabs the aide who is tasked with teaching her proper manners. Captain Kirk is thrown into the mix, and in a retelling of Shakespeare’s “The Taming of the Shrew,” he tries to show Elaan the error in her ways. But Elaan does not easily succumb to Kirk’s charms. She, like the other women of her race, has a special power. Elaan’s tears make men into her slaves; smitten, they are unable to resist her commands.

Barack Obama’s tears do not have this power. They do not engender a sense of love. Nor do his tears create feelings of admiration or goodwill among all Americans. Republicans have suggested that Obama’s tears are fake, a calculated ruse designed to turn public opinion against “gun rights” and to vilify the National Rifle Association.

And as shared online and in other spaces, some African-Americans are concerned with how President Obama is apparently quite selective with his tears: He publicly cries for the children at Sandy Hook, but did not do so for Tamir Rice, a 12-year-old black child who was de facto executed by the Cleveland police.

On questions of emotion and politics, Barack Obama exists in a tension-filled, contradictory space.

The chattering classes have often demanded that Obama show more “passion,” “fire” and “anger”—especially in response to the Republican Party’s blatant obstructionism and disingenuous behavior. Yet, many of the same commentators have also praised Obama for being “cool” and “cerebral.”

When Barack Obama has a moment when he demonstrates a sense of linked fate and empathy with the black community he is pilloried by the right-wing media. A president who happens to be black cannot say that “if he had a son he would look like Trayvon Martin,” but a white president could express all manner of concern if a white child was killed under very suspicious circumstances by a reckless, now proven to be racist, emotionally unstable, street vigilante.

In all, the faux controversy about Barack Obama’s tears (and his emotions more generally) is a reminder of how America remains unprepared for a mature discussion of what it means to be black and male in this society. While America (and the world) loves commodified, caricatured, distorted and unreal depictions of black men as offered in popular films, sports, pornography and commercial hip-hop, it is very uncomfortable with complex, fully human and nuanced depictions of black masculinity.

Barack Obama is a doting and responsible father and husband. He is also the most powerful man in the world, the president of the United States, commander in chief of the most deadly military on Earth, athletic, a fan of "Star Trek," "Star Wars," a reader of comic books, a law professor and an extremely literate and well-traveled man.

Obama is also comfortable enough with his own sense of self to cry in public.

This is a threat to a regressive and insecure masculinity that views public displays of sadness and loss as weakness. Obama’s tears are also a challenge to a type of black masculinity that emphasizes the physical over the intellectual and emotional. Obama’s tears are also powerful because they are a moment when he dropped “the mask” that black men (and women) wear as a life survival skill. For Obama to let his tears slip out from under the mask is an act of courage and uncommon vulnerability.

Black people have learned to wear the mask because the White Gaze is not easily capable of seeing their true and full humanity. For example, in the global race-making projects of slavery, colonialism and imperialism, race was constructed with a hierarchy, one where “whites” were at the top because they were deemed to be “naturally” less “emotional” and consequently more “intelligent.” Blacks were at the bottom of this “Great Chain of Being” because white race scientists and others concluded that people from Africa were “animal-like,” “emotional,” “libidinous” and “unintelligent.”

Those old stereotypes continue in the present. When African-Americans show common human emotions such as upsetness or frustration they are often described as “angry black people” whose opinions are subsequently to be discounted and rejected. A black person who demonstrated pride or “too much” self-respect and dignity during the American Apartheid of Jim and Jane Crow could be a target of white violence because he or she was “uppity” or did not “know their place.” During that era, black men were often lynched or imprisoned for “reckless eyeballing,” i.e., making eye contact with a white person (especially a white woman).

These racist cultural practices still exist in post civil rights era America. Police channel them when they kill defenseless black people and then claim to somehow be “in reasonable fear for their lives.”

[At present, America’s police continue to enforce the “reckless eyeballing” rules of Jim and Jane Crow when they arrest and otherwise harass black people for the “crime” of “aggressive staring.”]

Employers and supervisors engage in these racist cultural practices when they give harsher evaluations to black workers for the same job performance that would be rewarded if they were white. Black boys and girls are more harshly disciplined in America’s schools than white children. As research on these disparities details, black and brown schoolchildren are labeled as “disruptive” while white kids are “precocious” or “high energy”—for doing the same things.

Like other black Americans, Barack Obama is a victim of pernicious, racist double standards. Obama may be the most powerful man in the world, but he is still black and male in a society that systematically discriminates against and devalues people who possess those traits.

Barack Obama is not the only American politician or opinion leader to have cried in public. Yet somehow, his tears are a special problem for conservatives.

This is rank hypocrisy. Conservatives in the Age of Obama have been extremely emotional, with much of their opposition to Barack Obama taking the form of a temper tantrum on a national stage.

Right-wing charlatan and media personality Glenn Beck drew massive ratings on Fox News. Tears about the decline of America and the threat posed by Barack Obama and “liberals” were a central part of his shtick. Right-wing talk radio is populated by callers (and hosts) who rant, scream and cry about how “their country” is being destroyed by Obama, the Democrats, liberals, immigrants, black people, minorities, or whatever enemy Other of the day is the focus of their depraved attention. The excellent 2009 documentary “Right America: Feeling Wronged” showed white McCain and Palin supporters reduced to blubbering tears by the thought of either a black man (Obama) or a woman (Hillary Clinton) winning the presidency.

The emotional outbursts of conservatives in response to Barack Obama’s presidency are not “race neutral.” Nor are they “just” about disagreements in public policy. Social scientists have exposed the deep relationship between racism, hostility to Barack Obama, and support for the Republican Party. As such, the tears, the emotion, the anger, and the rage directed by conservatives towards Obama are infused with white racial animus.

Obama’s eight years in office have provided many examples of that behavior in practice.

In an unbelievable breach of protocol, a Republican congressman yelled “You lie!” at Barack Obama while the latter gave a speech to Congress in 2009. Conservatives have complained that Obama is “arrogant” and “aloof.” Sarah Palin accused then candidate Barack Obama of being “disrespectful” toward her. Republicans such as Chris Christie and others have regularly said that Obama acts like a “petulant child” or a spoiled brat.

These examples are akin to calling a black man a “boy,” denying him the respect due him as president of the United States, and saying that he is “uppity.” Even as compared to those examples of racism, the McCain-Palin campaign was exceptional in how it channeled the ugliest parts of America’s lynch law past. A black man who “disrespected” a white woman in America was punished with the rope, the tree and fire. Such ugly rhetoric by Palin and McCain was not an accident. It was part of a broader strategy of manipulating white fears and anxieties—one that included darkening the images of Barack Obama and lightening those of McCain--to win an election.

Obama’s cool pose has given him the strength to weather the storm of racism that has been directed at him by his opponents on the right. The mask partially conceals his emotions and frustrations at a Republican Party that behaves as though they hate him more than they love the United States. The mask of stoicism and self-control that black folks wear is strong, but it is not impregnable.

Republicans are responding with petty indignation and political opportunism to Obama’s tears because contemporary American conservatism is a redoubt and gathering place for authoritarians, racists, warmongers and bullies.

Movement conservatives want to destroy the social safety net. They view the weak and vulnerable as “useless eaters” and “human surplus” to be culled by neoliberalism. Today’s Republican Party considers the poor, the working class, people of color, women, immigrants, gays and lesbians, and Muslims to be its enemies.

Barack Obama’s tears at the thought of 20 dead schoolchildren are a reflection of his humanity. Movement conservatives are less likely to cry for dead children killed by gun violence, than they are at the thought of some fictive boogeyman coming to take away their precious guns.

This, among many other reasons, is why contemporary conservatism is sociopathy in the guise of a political ideology.