They'll never escape white rage: The world embraced Obama and MLK -- their countrymen would not

To watch Republican rallies is to see white crowds fuming with hatred of their black president. MLK knew that well 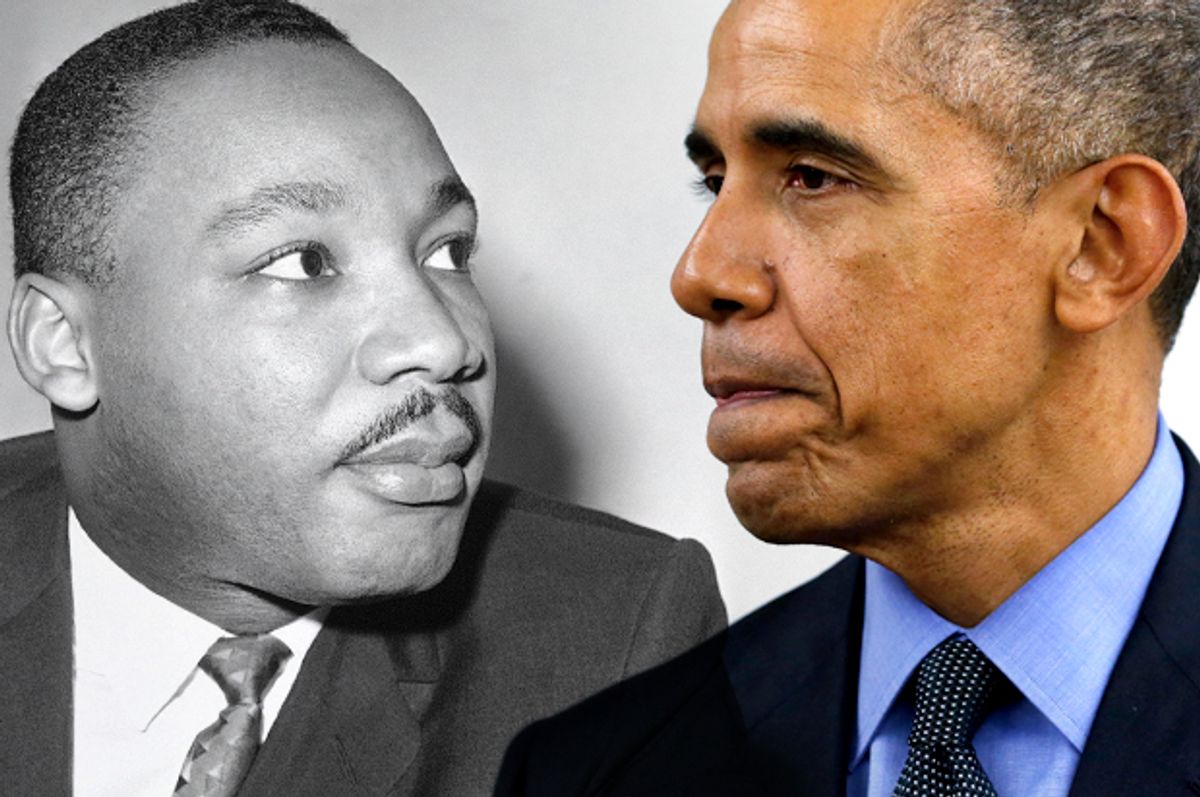 Barack Obama’s speeches are littered with quotations from Martin Luther King, Jr., so it was no surprise to hear the president weave one of King’s phrases into his State of the Union address. Obama said that he gained inspiration from those everyday Americans who showed that the nation could be a place of fairness and inclusion. These were “voices Dr. King believed would have the final word,” Obama declared, “voices of unarmed truth and unconditional love.” King uttered these words in December of 1964, when he accepted the Nobel Peace Prize. He told the Oslo audience: “I believe that unarmed truth and unconditional love will have the final word in reality.”

It is significant that Obama chose to quote from King’s Nobel Prize acceptance speech, and a reminder of the many links between the two men. They are two African Americans who have influenced American history in extraordinary ways, and two giants in the black struggle for freedom. They also became grand figures on the global stage. Their Nobel Peace Prizes were reflections of their glowing international reputations. Yet even as the world embraced these two men, they attracted intense hatred from white Americans.

When King received the Nobel Peace Prize, many African Americans and civil rights supporters swelled with pride. But white southerners were incredulous. J. Edgar Hoover was enraged. New Yorkers welcomed King home to a celebration at the Waldorf-Astoria, but white leaders in Atlanta were divided about whether to honor their native son. Ralph McGill, publisher of the Atlanta Constitution, realized that Europeans embraced King more fully than Americans did. “These Europeans have a view of Dr. King that is clearer than ours,” McGill wrote, “which has become befogged by emotions and prejudices.” Though Atlanta did finally hold a tribute to King, whites’ hatred toward him only increased over the last three years of his life. By the time of his death, King was reviled by a significant number of Americans.

It is a kind of revulsion that Barack Obama knows well. In this way, Obama’s experiences in office bears some striking resemblances to King’s final years.

To watch Republican rallies is to see white crowds fuming with a hatred of their black president – and to see leaders fan that hatred. Ted Cruz’s favored line of attack is to call Obama “lawless.” “Of all the troubling aspects of the Obama presidency,” Cruz declared, “none is more dangerous than the president’s persistent pattern of lawlessness.” Trump took to Twitter to announce: “Sadly, because President Obama has done such a poor job as president, you won’t see another black president for generations!” Martin Luther King confronted a deep-seated racism. And he was called “lawless” more times than he could count.

In his last years, King developed a message that was more explicitly radical. He was one of the first prominent Americans to oppose the Vietnam War. And when he did that, in 1967, he drew considerable scorn – from President Lyndon Johnson and leading liberal senators, from the editors of the New York Times and the Washington Post, from the heads of the NAACP and the Urban League. Conservatives charged that King had become an ally of Ho Chi Minh and a dupe of the Soviet Union.

At the same time, King began to attack economic inequality through his Poor People’s Campaign. He envisioned masses of the nation’s poor, black and white and brown, converging on the Washington Mall in an old-fashioned show of nonviolent civil disobedience. King understood that to tackle poverty in this way was to challenge capitalism itself. “For years I labored with the idea of reforming the existing institutions of society,” King told David Halberstam in 1967, but “now I feel quite differently. You have got to have a reconstruction of the entire society, a revolution of values.” White Americans responded in kind. One housewife in suburban New York had read Halberstam’s article about King in Harper’s. Halberstam encountered her at a dinner party in the summer of 1967. She announced, “I wish you had spit in his face for me.” The comment was no anomaly. In the heyday of the white backlash, Halberstam observed that King had become “a recipient of an extraordinary amount of that hate.”

Early in 1968, King traveled to Memphis to join with striking sanitation workers. On March 28, he led a march during which some of the protesters behind him turned violent. Chaos reigned in the Memphis streets, and King was whisked to safety. He endured a round of vicious criticism. White leaders claimed that King’s rhetoric of nonviolence was just a ruse.

Robert Byrd led the assault on the floor of the United States Senate. Byrd, a West Virginia Democrat, had belonged to the Ku Klux Klan in his younger days – but he had since renounced those activities. Byrd called King a “self-seeking rabble-rouser” who had “undoubtedly encouraged” the violence in Memphis. Byrd sounded the alarm about the impending poor people’s march. “King intends to build a powder keg village and then plead that no one play with matches nearby lest destruction occur.” According to Byrd, King pledged nonviolence but he brought only blood.

Tennessee Republican Dan Kuykendall stood in the House chamber and identified King as an “an internationally known figure, who by some unbelievable set of circumstances was at one time awarded a Nobel Peace Prize.” He described the violence in Memphis and accused King of “agitating destruction, violence, and hatred.” He warned: “I hope this exposure will wake up people to the evil results of his activities before it is too late and freedom is destroyed in America for all.” In this doomsday vision, King’s actions somehow imperiled the freedom of all Americans.

On April 4, hours before King was assassinated, Byrd further sullied King – claiming that he would bring violence to Memphis and to Washington. Congressman Robert Michel of Illinois urged King to resign from the civil rights movement and return to private life. Across the South and throughout the nation, political leaders amplified the hatred of a seething white populace.

Ted Cruz, Donald Trump, and other Republicans boast that in a year’s time, Barack Obama will leave the White House and return to private life. They lambast the Affordable Care Act as an example of the president’s socialist policies. In Nashua, New Hampshire last year, Ted Cruz claimed: “Obama is a disaster because he’s an unmitigated socialist, what he believes is profoundly dangerous.”

Charges of socialism greeted King when he announced his Poor People’s Campaign. He asked the congress to pass measures that would provide a guaranteed annual income for each American, a job for every individual who wanted one, and federal funds for at least 500,000 units of low-cost housing per year. In all, he asked for thirty billion dollars annually for antipoverty efforts. Such proposals make the Affordable Care Act look like a paean to free-market capitalism.

It is important to acknowledge several differences between the situations of Obama and King. Some of the hatred directed toward Obama is rooted in party politics. Obama is, of course, a politician and a partisan. By contrast, King was a preacher and a civil rights leader. And while King committed his life to nonviolence, Obama orders unremitting drone strikes and presides over the Guantanamo Bay detention center. King supported a range of policies that could credibly be called socialist; Obama did nothing of the sort.

It is also important to note that both men gained the affections of legions of Americans. Obama won two nationwide elections by convincing margins, and still holds the everlasting devotion of the Democratic base. King was revered by many African Americans and white activists, despite the challenges he faced from the rising Black Power movement.

Still, neither man could escape the vitriol of white Americans. And a comparison of the anti-King rhetoric of 1968 with the anti-Obama rhetoric in 2016 makes for some chilling parallels.

Then as now, a deep racial animus underpinned much of the white hatred. It was rarely discussed yet always lurking. Even in 1968, whites understood that they had to frame their malice toward King as something other than racism. They did not oppose King because he struggled for black freedom and equality, said many whites. They detested him because he was a “rabble-rouser,” a Communist, and a law-breaker.

It might be harder to label as simple racism today, but the opposition to Obama is often entangled with racial fear. White men account for the vast majority of Obama haters. Some are ideological conservatives who simply reject his policies. Some think that he wants their guns. For many others, a corrosive and convoluted fear drives it all: a fear of racial minorities, a fear of religions other than Christianity, a fear of immigrants with brown skins. Trump stokes these fears and plays to the idea that white workers have lost their cherished place in American life. Obama stands as the ultimate symbol of a changing nation.

In 1964, Ralph McGill wrote that Atlanta citizens had become “befogged by emotions and prejudices” in their attitudes toward Martin Luther King. Europeans who awarded him the Nobel prize could see more clearly – indeed, Europeans anticipated how history would remember King. In the last five decades, Americans have witnessed a stunning transformation. Martin Luther King has changed from an outlaw to a saint, from the target of enmity to the subject of a monument on the Washington Mall. He now occupies a cherished place among the nation’s heroes. We celebrate a national holiday in King’s honor, yet the controversy that dogged him is part of the not-so-distant past. It was not until the year 2000 that the state of New Hampshire finally recognized Martin Luther King Day as a paid holiday.

Today, Americans have forgotten the hatred for King. Which begs the question: How will Americans remember Obama? As a divisive leader? Or as one who broke the greatest barrier in American politics, and who left a long list of accomplishments – who rescued the economy, provided health care for the underinsured, and helped pave the way for same-sex marriage? Before foaming at the mouth at the mention of Obama, today’s haters might consider how we now view those who scorned Martin Luther King.