David Brooks is losing it: Trump's success and ideas not connected to "Planet Earth" have broken the right-wing pundit's brain

Times columnist urges the "silent majority" of moderate GOPers to take on the Donald. Problem: it doesn't exist 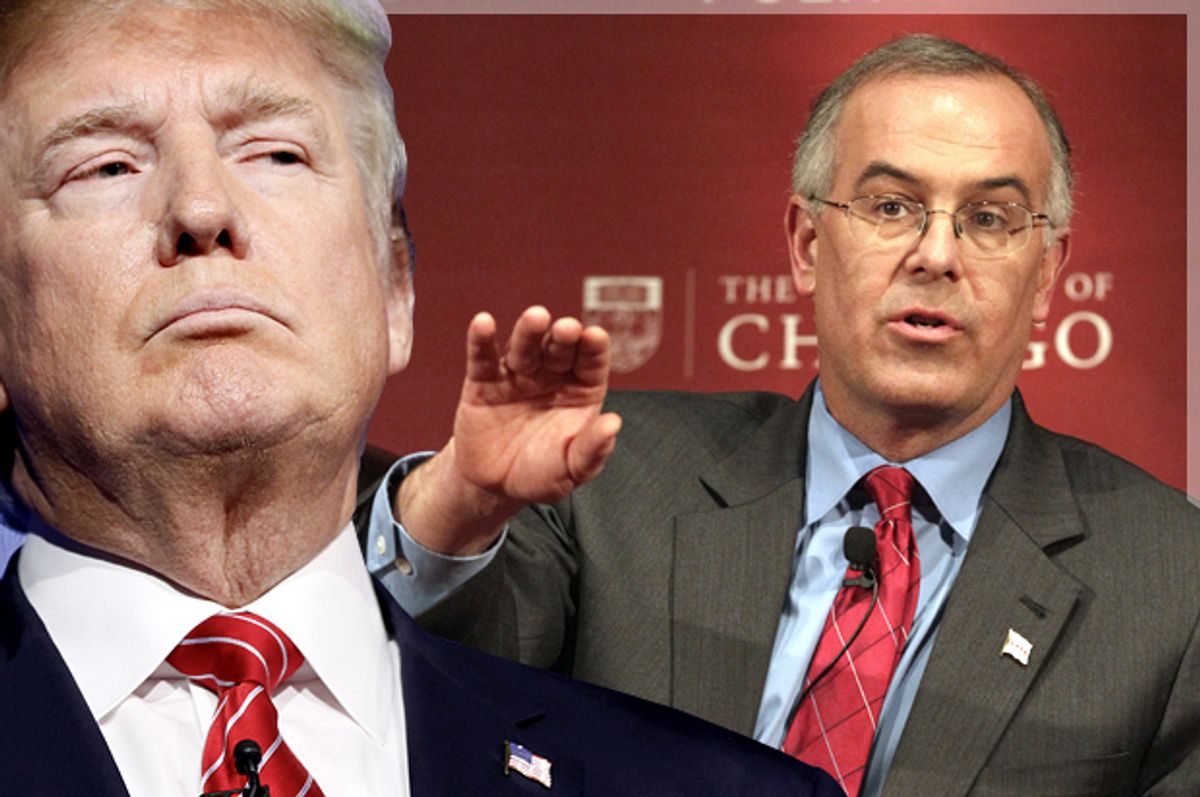 There are many pleasures to be found in Rick Perlstein’s trilogy (soon to be quadrilogy) about the rise of the conservative movement.

Namely: That many political pundits have no idea what the fuck they’re talking about.

This is the case no matter where on the totem poll you’re happening to look. Often, in fact, it’s the elite pundits who are most glaringly off-base. And it’s not just that their predictions are wrong; that’s common, hardly worth noting. It’s that they’re supremely wrong. They’re drank from the wrong grail at the end of “Indiana Jones and the Last Crusade”-level wrong. They are, not infrequently, about as far removed from being right as they could possibly be.

What brings this to mind, you ask? The latest disconnected snoozer from the New York Times’ David Brooks, who is now trying to sound a call to arms and get the “silent majority” of the GOP’s “hopeful, practical, programmatic Republicans” to rally around a single presidential candidate. And he doesn’t particularly care which. He’ll take anyone, really, so long as their name isn’t “Ted Cruz” or “Donald Trump” — two men, he says, whose elevation to the White House would “genuinely endanger their own nation.”

The Tea Party, Ted Cruz’s natural vehicle, has 17 percent popular support, according to Gallup. The idea that most women, independents or mainstream order-craving suburbanites would back a guy who declares his admiration for Vladimir Putin is a mirage. The idea that the G.O.P. can march into the 21st century intentionally alienating every person of color is borderline insane.

The sentiment is unremarkable, which is probably why The Washington Post’s Michael Gerson — former George W. Bush speechwriter, extremely bad teammate, and current poor man’s David Brooks — has been saying it for months. And Brooks’ contention that Cruz or Trump candidacy would be disastrous for the Republican Party, writ large, is similarly banal. None of this is what brings the clueless pundits of yore to mind.

Rather, it’s Brooks’ assuredness that there’s a “silent majority” of milquetoast technocrats dwelling within the Republican Party that rankles. He offers no evidence — perhaps because there’s little evidence to be had — and simply holds that his chosen party, long a vehicle for plutocracy and a reactionary version of white identity politics, is something that is not: an American equivalent to Germany’s Christian Democratic Union, or the less-reactionary elements of the Conservative Party in the UK.

What’s especially risible is that Brooks does this while railing against Trump for supporting policies that have had “no contact with Planet Earth,” and while slamming Cruz for being skilled at “tearing things down” but incapable of “putting things together.” The silent majority within the GOP, he says, must create “a grass-roots movement that stands for governing conservatism.” It must, he says, create a hybrid of “working-class populism, religious compassion and institutional reform.”

For all Brooks’ self-flattering talk about having a clear vision of the future, you’ll notice that this solution — this combination of “working-class” (read: white) populism, the religious right, and a desire for structural change — is basically indistinguishable from what helped Ronald Reagan become president. The idea is many things; what it is not, however, is new. But to hell with inconvenient facts, right? David Brooks is here to bluntly speak the truth!

If you’re not ensconced in the same bubble of coastal elitism as Brooks, the disconnect between the GOP of reality and the GOP of Brooks’ fantasy is impossible to miss. All the more so if you happened to see Donald Trump’s Monday performance at Liberty University, which is supposed to be one of the most important nodes in the conservative evangelical political machine. If Brooks were right about this silent majority, you’d expect Trump to bomb. But, of course, he didn’t.

As the New Republic’s Jeet Heer and the Washington Post’s Greg Sargent have both noted, Trump’s manifest lack of knowledge of (or interest in) Christianity makes the religious right’s love for him pretty confusing — at least superficially. But as both also suggested, the reason it doesn’t seem to matter is because Christianity, for many in this audience, isn’t a religion; or rather, it isn’t exclusively a religion. It’s also a marker of tribe and identity. And that’s the kind of mindset Trump can speak to like no one else.

If Brooks were right about what motivates the GOP’s activists and its base, Trump’s success with evangelicals and other conservative Christians would not be possible. And yet, here it is; before all is said and done in Iowa, in fact, he may end up with more evangelical support than Cruz, whose religious right bona fides are impeccable. If he does, he’ll do it not by knowing that it’s Second — not “two” — Corinthians, but by playing the strong patriarch better than his opponents.

Because that’s what the plurality (or even majority) of Republican voters want right now.  They want a wall, they want deportations, they want a religious test for entry into the country. Whatever their collective vision for their party happens to be, it has precious little to do with the hypocritical sneering — and abject wrongness — of David Brooks.