"The Revenant" takes the lead: Repeat Oscars for Iñárritu's spectacular vision would make history — and shouldn't let the academy off the hook 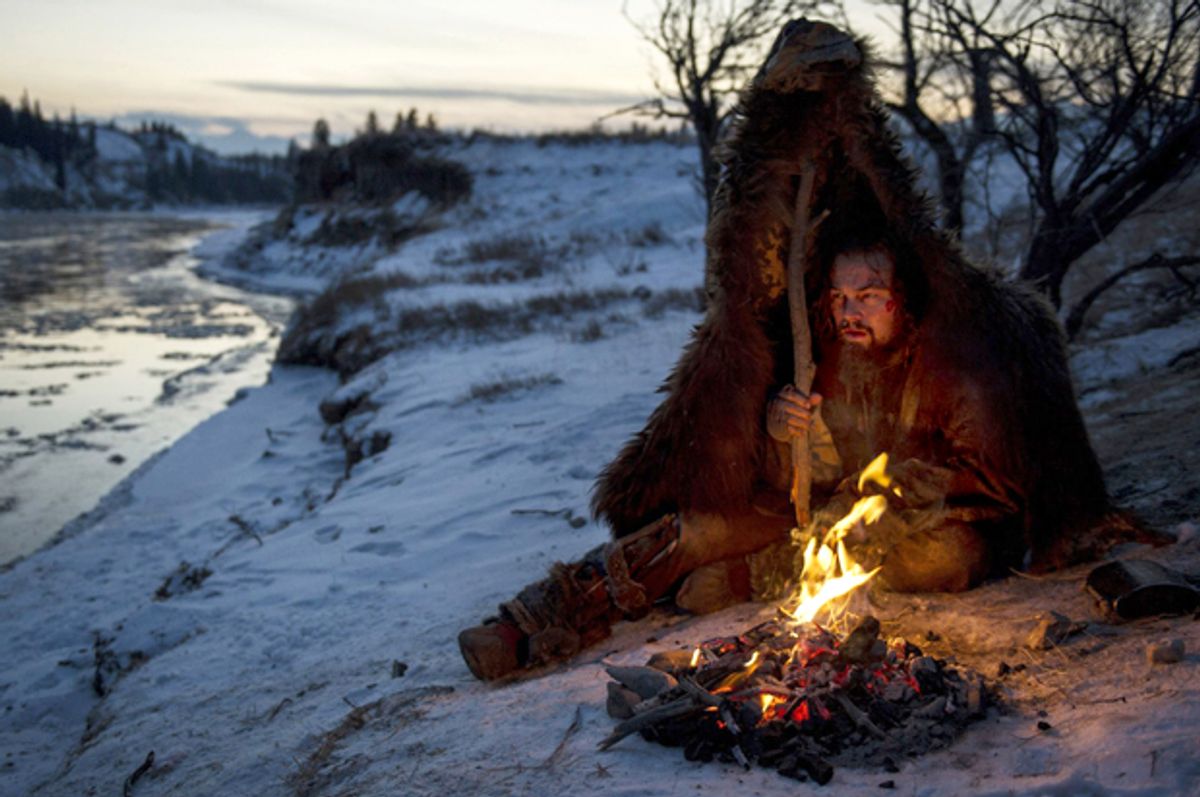 A surprising front-runner is emerging in this year’s Oscar race. After Vulture’s Kyle Buchanan crowned “Spotlight”—Tom McCarthy’s meticulously fact-based drama about the Catholic sex abuse scandals—the presumptive winner back in September, it’s been treated as a shoo-in all year. The same was true last year, when Richard Linklater’s “Boyhood” looked like it would sweep the awards—that is, until “Birdman” took the Producers and Directors Guild Awards late in the season, en route to a best picture win.

This year, another Alejandro G. Iñárritu film might be mounting its own last-minute push. After racking up 12 Oscar nominations—including best picture, best director (Iñárritu), best actor (Leonardo DiCaprio), best supporting actor (Tom Hardy), best cinematography (Emmanuel Lubezki), and best editing (Stephen Mirrione)—“The Revenant” seems poised to be the Mexican director’s second champ in a row. Although Vegas bookies still favor “Spotlight” (with 4-5 odds) and the New York Post argued the “The Revenant” is still a long shot, the numbers are on Iñárritu’s side. The film with the most nominations usually wins picture. Last year, “Birdman” led with nine noms.

There are a litany of other reasons to think it can win: “The Revenant” currently leads the pack on Gold Derby, the most-trusted Oscar predictions site on the Web. All but one of the site’s editors is predicting a victory for “The Revenant,” the same margin that’s forecasting another win for Iñárritu.

That’s important, because the best director is usually responsible for helming best picture. Since 2005, the two categories have matched up seven times, and recent history leans toward Iñárritu over Tom McCarthy: Best director wins are more about flashy technical theatrics (“Life of Pi”), rather than more subtle work. This is likely why the academy favored Iñárritu last year over Richard Linklater for “Boyhood.” Editing 12 years into a seamless whole was certainly a remarkable feat, but it doesn’t have the same gasp factor as the one-shot stunt in “Birdman.”

The lack of showy artifice in “Spotlight” is exactly what makes it great: The film never loses sight of telling a complicated story as simply as possible. It’s also why “Spotlight” might lose.

In addition, Michael Keaton’s snub shows the Oscar just might not be that into “Spotlight.” After he lost to Eddie Redmayne last year for “The Theory of Everything,” a probable nom for Keaton was seen as the makeup gesture the Oscars are known for: ignore someone for a more deserving performance, reward them later (see: Denzel Washington, who won for “Training Day” instead of “Malcolm X”). While Mark Ruffalo was nominated, Tom Hardy was boosted in Keaton’s place.

While “Spotlight” will likely battle for any awards it does happen to win (it’s only a lock for best original screenplay), “The Revenant” stands to mount a mini-sweep: It’s looking a likely winner for best picture, actor, director, and cinematography and could surprise in production design and editing. “Mad Max: Fury Road” is the front-runner in both categories, but the best editing winners often points to the eventual picture champ. Thus, “The Revenant” could take home as many as six awards; if “Spotlight” pulls off a best picture victory, it’ll boast three—at the very most.

But as the Post’s Lou Lumenick points out, “The Revenant” has a number of obstacles to overcome on its path to Oscar glory: Although its Golden Globe win would seem to set “The Revenant” up for victory, the two groups diverge just as often as they agree. Since 2005, five best picture winners have won either the Globe for best drama or best musical or comedy. On top of that, no director has ever crowned two best pictures in a row, and only two (John Ford and Joseph L. Mankiewicz) helmers have earned back-to-back trophies.

All of this, however, is just sound and fury—because Iñárritu was the only person of color nominated in the major non-writing categories for the second year in a row. This year, actors Michael B. Jordan (“Creed"), Samuel L. Jackson (“The Hateful Eight”), Will Smith (“Concussion”) and Idris Elba (“Beasts of No Nation”) were all snubbed during Tuesday’s announcements. This was despite the fact that Elba was both nommed at the Golden Globes and the Screen Actors, Michael B. Jordan won best actor from the National Society of Film Critics, and Smith nabbed a Globe bid.

This was a fact that Twitter users took note of when last week’s Oscar nominations were announced—#OscarsSoWhite became a national trending topic yet again. In response to the continued controversy, Cheryl Boone Isaacs, the president of the Academy of Motion Picture Arts and Sciences, said that she was “heartbroken and frustrated,” while actress Jada Pinkett Smith and director Spike Lee have vowed not to attend this year’s ceremony. “Selma” star David Oyelowo was even more damning. “I am an academy member and it doesn’t reflect me, and it doesn’t reflect this nation,” he said in a recent speech.

Iñárritu should be pretty used to repping diversity at the Oscars by now. Last year, when the Oscars’ acting pool was all-white for the first time since 1998, his fellow “Birdman” screenwriters—including Armando Bo and Nicolás Giacobone—were the only other people of color included in the top categories. Those names were a refreshing addition to a disgustingly whitewashed group, but the Oscars remain clueless about how to deal with the very little diversity its nomination pool boasts. While presenting the best director trophy to Iñárritu last year, Sean Penn quipped, “Who gave this son of a bitch his green card?” He later refused to apologize.

What concerns me about Iñárritu’s potential win isn’t that he doesn’t deserve the honor (although I’d really like to see George Miller recognized for his nearly three-decade quest to bring “Mad Max: Fury Road” to the screen). Instead, I’m worried that anointing Iñárritu gives the Oscars a “Get Out of Jail Free” card for continuing to ignore artists of color and a pass on actually learning any lessons from the ongoing #OscarsSoWhite controversy. After all, you can practically hear them murmuring, we can’t be racist, right? A Mexican director won two years in a row! Iñárritu is quickly becoming the Oscars’ token friend of color.

Before you dismiss this as hopelessly cynical — or suggest that I’m arguing Iñárritu is a diversity pick, which I'm not — it's worth remembering that the Grammys have playing a similar game for years. Whereas artists like Beyoncé and Kanye West are routinely snubbed for the evening’s top awards—Knowles in 2015 for her self-titled smash and Yeezy in 2011 for “My Beautiful Dark Twisted Fantasy”—they’re given consolation prizes instead. These include “lesser” awards like best rap or urban/contemporary album, a category introduced in 2013. Its first recipient was Frank Ocean, who should have won it all for “Channel Orange.” In true Grammys fashion, best album instead went to Mumford and Sons, your mom’s favorite folk-rock band. Because people of color are thrown something, it means that voting bodies can ignore the many other ways their choices aren’t inclusive. Last year, the academy attempted to make up for snubbing “Selma” in the best director and best actor categories (Ava DuVernay and David Oyelowo were respectively bumped) by giving John Legend and Common an Oscar for “Glory,” the song that appears in the film’s closing credits. This year, The Weeknd’s “Earned It” (from “Fifty Shades of Grey”) is considered a long shot in the best original song category, and the group snubbed “See You Again,” Wiz Khalifa’s massively popular tune from “Furious 7.”

Without a viable contender in any other category, Alejandro G. Iñárritu may be the Oscars’ last hope. So whether or not you’re surprised to hear his name called on Oscar night—instead of George Miller's or Tom McCarthy's—you shouldn’t be shocked when the nomination pool is all white again next year. Iñárritu might be on the verge of making history, but the Academy Awards appear doomed to repeat their own.