The unromantic gift that saved my marriage

On my wedding day, I was nervous about sharing a bathroom with a boy. I couldn't have imagined what lay ahead. 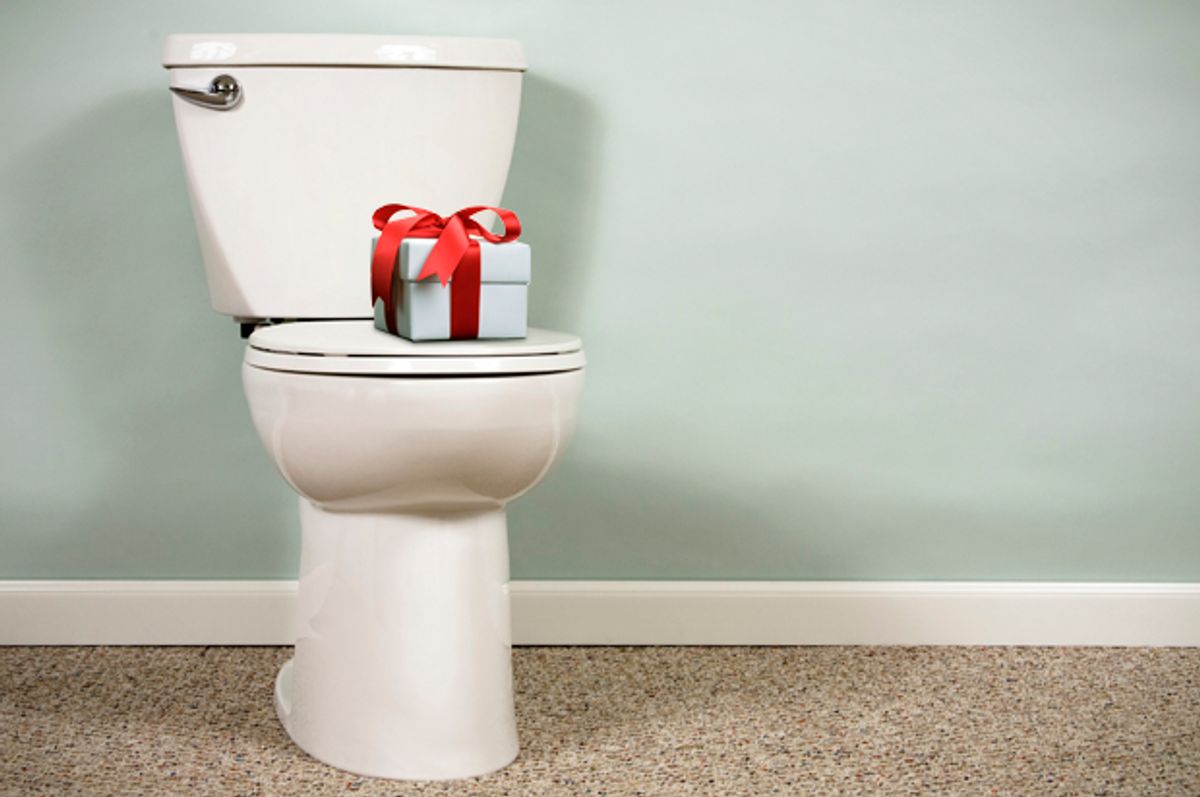 I wasn’t afraid of giving birth. I was healthy, I was in love, and at 29, I was seemingly the youngest pregnant person in Manhattan.

“I have a feeling this will be very easy for you,” my doctor confessed as my due date approached. “In my experience, women with freckles rarely have complications.”

But a few days after I delivered a healthy baby boy, there was a problem. Between every breast-feeding session I was rushing to the bathroom. I had expected all sorts of postpartum aches and pains, but diarrhea?

Within two weeks, I weighed less than I had pre-pregnancy. I couldn’t keep anything in my stomach for longer than a few minutes. My world shrank to the size of my bed and my bathroom: all day I alternated between caring for my baby and caring for myself. I was exhausted, in pain and afraid.

Above all, I was humiliated. I was the type of Kate-Middleton-worshipping girl who used the word “restroom.” My colleagues had recently thrown me a baby shower and gifted me “Boudreaux’s Butt Paste” just to hear me say the name. I had been raised by a Southern mother who taught me to cross my legs at the ankle and “not chase boys”—but even she thought my modesty went too far when I asked her to leave the dressing room while we shopped for my wedding dress. There was no logical reason for my shyness about my body. My bachelorette weekend devolved into a therapy session on sharing a bathroom with a boy. “He’ll be your husband!” the girls shrieked over champagne.

Now here I was, trapped with that boy in a tiny New York apartment, living my worst nightmare. There was no hiding my humanity.

“You’ve gotten your figure back,” Eric offered lovingly, but I could tell he was worried.

A gastroenterologist on the Upper East Side explained that the antibiotics I received during delivery had killed bad bacteria, but also all of the healthy bacteria that I relied upon to digest properly.

I ate gallons of yogurt with no results. The plastic cartons piled up on my kitchen counter next to the menacing breast pump equipment. I pushed my way into other doctors’ offices, and to my great horror, tested positive for something called Clostridium difficile.

The doctor looked at me apologetically and said that it was true: antibiotics had killed off all of my friendly “gut flora”—something I had never even considered—and “bad guys” had taken over. On the ride home, I looked up C. diff and WebMD assured me that this was no regular case of “D.” I was captive to the king of bacterial infections, which kills more than 14,000 people per year.

Medication kept my symptoms at bay for a few weeks, but the C. diff came raging back and I was rushed to the emergency room. “The bacteria is getting smarter and more resistant,” the doctor said. He wrote me a different prescription, with no promises.

“I love you, Duchess of Diff,” my husband said, wrapping me up in the warm hospital blankets.

If I was an aspiring Kate Middleton, delighting in the storm of teacups and thank-you notes that our wedding precipitated, my husband was a double for Mitt Romney. A string-bean financier with a 4.0 GPA, he approached everything in his life with precision.

But whatever calculations had gone into the match of a priss and a perfectionist were now deconstructed. My moment with seduction—at least the physical kind—was long gone. The only thing that could take its place, I dared to hope as I looked in the mirror and saw dark under-eye circles and baby spit-up in my hair—would be a kind of emotional seduction. The spell of two people cocooned in a never-before and never-again situation.

I smiled at him, knowing how terrible I looked in the hospital bed, and realized that he was the person I wanted closest to me—no matter what.

“C. diff?” a nurse who was refilling my IV asked, and shuddered. “I used to work for a doctor who fixed that stuff with stool transplants. That’s just a fancy way of saying he puts someone else’s poop in your colon to restore the good bacteria. He’s kind of a nutty professor, but it works like 95 percent of the time.”

Horrified, I clutched my prescription for the next drug and whispered to my husband to pull the car around.

The days after that I felt optimistic. The new drug seemed to be working. I identified the neighborhood coffee shops with no front steps, and pushed the stroller confidently in their direction. There was a bakery that made cupcakes in the shape of hydrangeas; the baby watched while I photographed and devoured them.

But within hours of finishing the medication, fever struck and my insides ached.

This third bout with C. diff replaced my embarrassment with ice-cold fear. If this disease was stronger than drugs, would I have it forever? Worse yet, would it kill me? I thought of the baby and his chubby cheeks that looked full of acorns. I thought of the years ahead of him and my throat constricted. Taking four pills a day could keep the symptoms at bay, but C. diff still owned me.

My nightly routine had gone from turning off Netflix to turning off my panic over my condition.  “We’re going to get you all patched up,” Eric whispered near my hair as we fell asleep.

Somehow, we  were growing closer, and perhaps even—against all logic—happier. In my memory of this time we are dancing down the aisles of RiteAid, shopping for probiotics, enemas and suppositories; we are gossiping at the breakfast table about the regulars on cdiffdiscussion.org; we are singing little rhymes about poop and pronouncing every syllable in the old-English spellings of “Faeces” and “Diarrhoea.” We are finally dialing the Nutty Professor’s office, holding our breath to see if he can fit us into his schedule. We cross our fingers that Eric will be an eligible donor. We pretend it is like The Bachelor, except instead of “will you accept this rose?” we are asking each other, “Will you accept this stool?”

Friends wanted to know how motherhood was going. I told a few of them the wacky secret that I was not only breast feeding around the clock and sleeping five hours per night, but also slave to a potentially fatal gastrointestinal plague. When they texted frantically to get more updates, I often had to suppress the urge to report on my largest looming symptom: love. C. diff was winning in my gut, but it was losing to the chemicals of the brain that went nuts when I saw my husband's endearing too-short haircut, or held his hand in the front seat of our Jeep.

The day of our consultation, the Nutty Professor entered the room with gingery hair and a quick smile.

“Drugs are not going to help you,” he said cheerfully, as if this pleased him. He went on to say that it was true about the near-perfect success rate of his experimental procedure.

“What can I expect afterwards?” I asked, fearing another relapse.

“Well,” the Nutty Professor said, grinning like a Cheshire cat, “what does your husband like to eat? If he likes beer and chicken wings, you can expect to eat a lot more bar food.”

He wasn’t kidding: Once a patient receives new intestinal flora, his or her tastes adapt to reflect the donor’s. Some doctors had seen vegetarians convert back to meat eaters. If this was the worst side effect he could think of, it sounded like a miracle.

I signed the paperwork consenting to be part of his clinical trial; poop as a drug was still pending FDA approval and only a handful of doctors in the country were performing the procedure. But with antibiotics causing more and more resistant infections, stool transplants were becoming the only answer for many patients like me.

Eric reassured me that this was the necessary next step, and that he was honored to be my donor. “We’ll sort of be like blood brothers after this,” he mused at a red light.

The girl who had stood at the altar two years ago had no idea what “in sickness and in health” would mean for her. She might have turned and run the other way if she’d seen the forecast of this shitstorm. But the woman I’d become cared very little about the “ick” factor of human bodies; I now merely bowed to its power and my own vulnerability.

On the day of the procedure, we stopped at Starbucks to get Eric an iced coffee, black. About an hour later, the nurses high-fived him for his “generous donation,” and he beamed as wide as he had when our son was born. Then, through the curtain to our room, we heard one of the nurses whisper, “Whoever prepares it gets to go home early.”

While the nurses rolled me into the operating room and hooked up the anesthesia, the Nutty Professor sat at his desk, chatting about college basketball with my husband. Everyone asked about my son; I mentioned his stick-up hair and the intoxicating scent of Johnson & Johnson’s. It all became very hazy, and I woke what seemed like minutes later with my eyes crossed.

The C. diff symptoms didn’t return. It took weeks for me to believe that I was normal again.

“How are you feeling, Lady Diff?” Eric asked each day, and tentatively, I would say “Okay,” as if even uttering the word “good” would cause a relapse. After months of sickness, could the cure really be so immediate?

Eventually, my maternity leave ended. I got a haircut, bought a new pair of heels and refilled my Metro card. The tears I cried when I left my son at daycare were mostly about those Squirrel Nutkin cheeks, but also the ability to continue my life as planned.

Recently my husband gave me a beautiful new bathrobe. Cotton, for our second anniversary.

But the gift I value most this year is the one made up of bacteria. The one that rescued me from the toilet, brought me back to my life, and taught me that romance can flourish, like a weed, in a dark and unlikely place.

Caroline Hamilton is a writer in New York. She received her MFA in Creative Writing from The New School. Her essays have been published in The New York Times and Elle.