Trevor Noah gets it now: His takedown of Ted Cruz shows he's only growing sharper on American politics

The "Daily Show" host is picking up speed as successor to Stewart and Colbert rival, and not a moment too soon 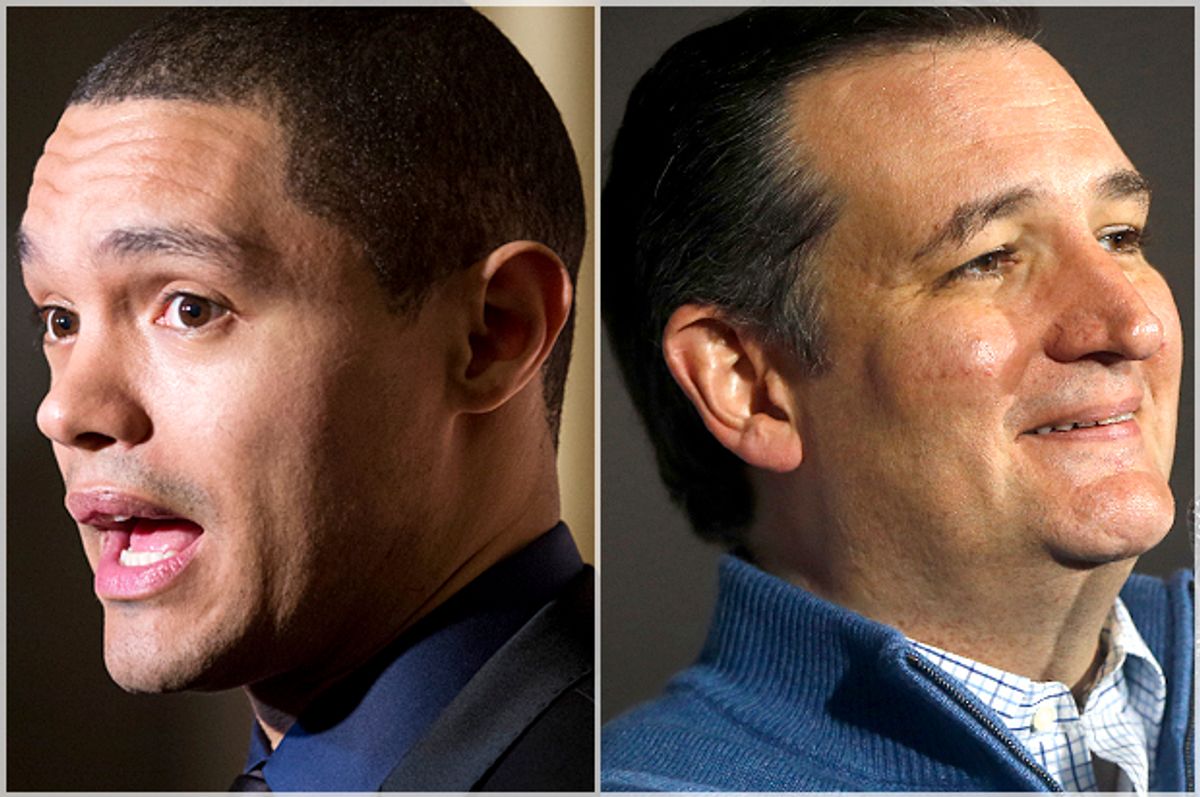 For a long time, Donald Trump has been the bogeyman of the left: People can’t stop making fun of his hair, his bluster, his rude comments. And for good reason — the guy is toxic and full of hate, and he stirs Americans up by appealing to despicable instincts like xenophobia He mocks the disabled. But lately, Cruz has begun to scare people: He’s so much more in control than Trump, and because he’s so clearly a performer, people wonder what happens when he pulls off his mask and proves he’s secretly a lizard. He’s also, whatever his faults, extremely smart, and as that becomes clearer, he becomes even more frightening. Polls be damned: Cruz has become the candidate most likely to make Democrats say they are moving to Canada.

Last night on “The Daily Show,” audiences got to see two things. First, the Cruz-is-worse-than-Trump notion has been ratified by a great comic bit. And, Trevor Noah is now showing he can do politics as well as anyone on late night. At least, when he’s on, as he was Monday night. His praise of Trump for “making Ted Cruz look like a d*ck” may be his best riff since he he compared Trump to an African president.

Otherwise, Noah has had mixed results on politics so far — he’s a soft interviewer, and seems more interested in celebrity and a millennial audience than politics. He suffers in comparison to Colbert, who can be a great interviewer of politicians. And it's hard for a lot of people to forget Jon Stewart.

But Noah has much of Stewart’s old writing team, the instincts of a standup comedian, and an unhinged Republican field in which parody and reality seem to trade places. So there have been high points over the last few months. In November, for instance, he contrasted Republican chest thumping – Jeb Bush’s boast that he eats nails in the morning, for instance – with the candidate’s demand for a play-nice debate with a very sharp bit. "What happened at that CNBC debate that transformed the crew from The Expendables into the cast of Scooby-Doo?"

Last night, Noah got into the “New York values” fight, which reduced Cruz to clapping along as Trump destroyed his argument. “When the World Trade Center came down,” Trump said, “I saw something that no place on earth could have handled more beautifully or more humanely than New York.” As he went on and Cruz started clapping along, Noah set it up: “Because Trump brought up 9/11, Ted Cruz has to stand there and applaud Trump while he does it. That’s like getting a guy to cheer for you while you make love to his wife.” He went on from there. Ouch.

Last night, Noah was strong all around. He wasn't done with politics after this: Running a clip of Ben Carson talking about the savagery of Internet comments Noah turned around and called the rest of the Republican slate “comment sections with campaign staffs."

Noah will never have the angst and moral energy of Stewart. His mockery of Bernie Sanders for not hearing a question was rude and deserves some pushback from older people: We’ll all have hearing problems if we live long enough. And does he really want to make fun of Sanders’ Brooklyn accent?

But Noah seems increasingly confident and sharp. He has joy, ease, and timing on his side. If he can avoid the cheap shots, he could raise the bar for Colbert, make people stop comparing him to Jon Stewart. And with Cruz growing as a threat every day, lefties need Noah to bring his A game. It’s not just comedy any more.