Celebrity deaths and the "problematic fave": Enough with the moral tug-of-war between "hero" and "villain" legacies

It's not about separating genius from flawed human, but accepting that sometimes there's no separation at all 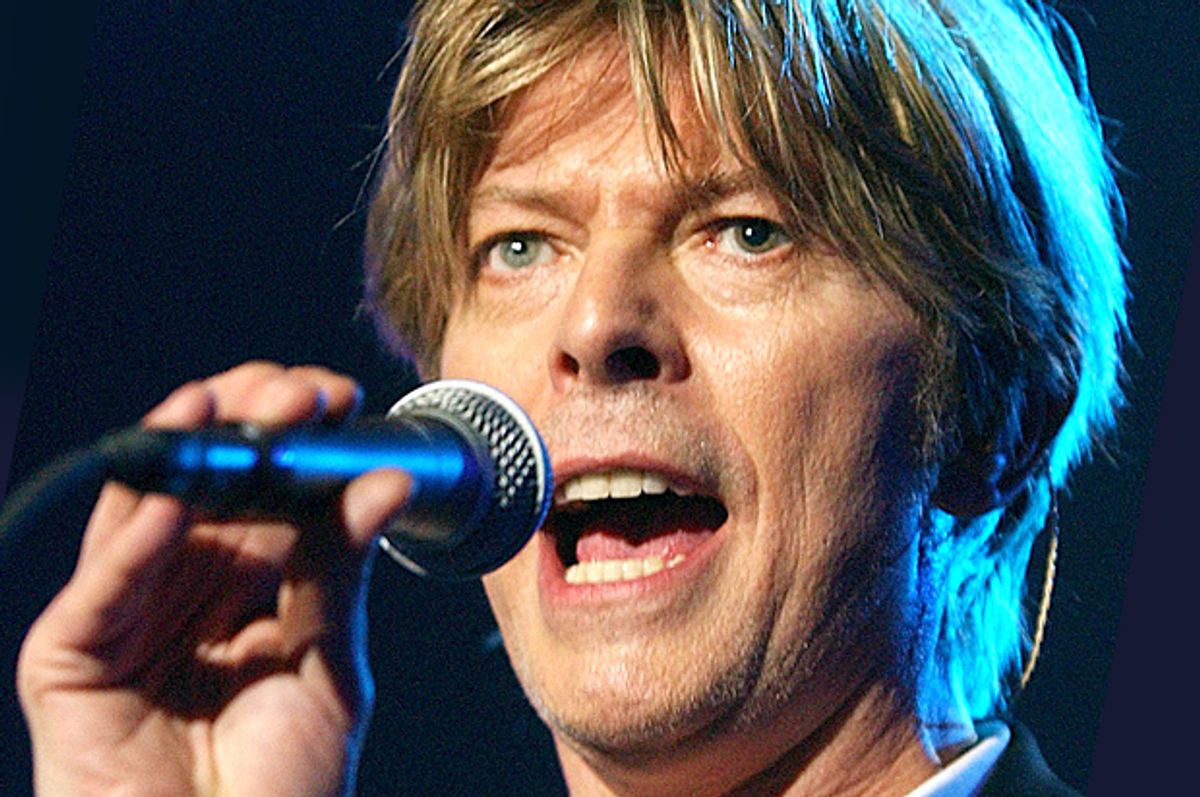 My feelings about the past week of grieving celebrities and bickering with fellow social-justice-warrior-y types about how to grieve over celebrities were summed up pretty well by a tweet from one of my Twitter friends: “A quick Google and a thorough check of Your Fave Is Problematic indicate that it's safe to publicly mourn Alan Rickman.”

Of course I’m glad Alan Rickman was, as well as an amazing actor, by all accounts a pretty amazing human being. There’s nothing wrong with being a fan both of an artist’s work and of an artist as a person, the causes they support and the impact they have on the people around them. Likewise, I absolutely agree that while “speaking ill of the dead” should be kept to a minimum, that when a famous person has a checkered legacy it’s important not to sweep their misdeeds under the rug when they die--to do so is disrespectful to the people they’ve wronged and has been a favorite tool of those who use grief to manipulate our understanding of history.

But treating a legacy as something to be weighed on a binary scale--as though you have to add up all of a person’s sins and, if they surpass a certain threshold, they’re instantly moved from the category of “hero” to “villain”--doesn’t help anybody.

Take David Bowie. Although I didn’t connect to his music the way many of my peers did, it’s impossible to listen to his music and not hear his genius. And it wasn’t just his talent people fell in love with, but what he stood for--that his public image and his music carved out a space for queer sexuality and unconventional performance of gender, that his bold, no-shits-given stage presence, his absolute unshakeable confidence and comfort in whatever bizarre identity he was wearing at the time gave other people the courage to feel comfortable in their own skin.

The thing that makes both of these stories uncomfortable is that they’re not really “sins” or “gaffes” or “peccadilloes” that stand at odds with the rest of the narrative of Bowie’s life. They’re entirely consonant with what people loved about him, or at least people at the time thought they were. The same caution-to-the-wind total commitment to becoming an outré boundary-crossing character--the same utter defiance of social convention--that created Ziggy Stardust created the Thin White Duke.

And in the 1970s, the “baby groupie” scene, complete with its own circle of starlets followed around by their own dedicated magazines, was tied into the sexual revolution as a whole.In the early 1970s you’d be hard-pressed to find someone who expressed what we now think of as a mainstream view of sexuality--sex-positive but consent-centric, fervently in favor of breaking boundaries but at the same time acutely aware of power dynamics.

In other words--and I speak from experience as someone who gets unpleasant feelings of culture shock reading about the era--there was a tacit assumption that if you thought having sex with underage teenagers was unethical or immoral or gross, you were probably also grossed out by gay sex and polyamory and kink and you were probably a churchgoing middle-aged “square.”

Being pro-“sexual liberation” at the outset implied not caring all that much about age of consent. It took a while to develop the language to talk about sex and consent without bringing back the context of “traditional” Christian morality--and, indeed, the end of the 1970s as an era was marked by the fracturing of radical left social movements along that line, with the move to expel NAMBLA from the first gay march on Washington in 1979, the “feminist sex wars” of the early 1980s, etc.

Make no mistake about it: I firmly believe consent is vital in sexual relationships--in all relationships--and an adult having sex with an underage person is, at best, reckless and dangerous and irresponsible, at worst rape. I don’t think that’s a matter of aesthetic preference, of “changing with the times,” I believe we genuinely know better than our forebears because of hard-won experience from listening to the stories of people who’ve been badly hurt by relationships where their partners had vastly more power than they did.

But David Bowie clearly didn’t think of his relationship with Mattix as rape. Mattix didn’t either. Mattix still doesn’t, and it feels wrong to demand we label her as such against her will even as it feels hypocritical to let Bowie off the hook while condemning modern-day musicians for doing much less.

There’s your uncomfortable truth: It’s very hard to imagine a David Bowie who would’ve said no to a 15-year-old groupie in 1975 who’d still be David Bowie. To him, in the ethical world he lived in at the time, saying “yes” to the sexual revolution meant saying “yes” to all of it, even though to us, his successors, sexual freedom and reckless disregard for consent are miles apart.

Just like, on some level, the give-no-fucks candor with which Bowie put MTV on blast for not airing black artists in 1983 is rooted the same give-no-fucks brazenness with which he spent 1976 play-acting a white supremacist.

Yes, he regretted it later and said so many times. Yes, he was in the grip of cocaine addiction when he came up with the Thin White Duke character and improvised lines like “Adolf Hitler was one of the first rock stars.” Yes, white privilege can be so blinding that he isn’t the only one who’s managed to become enamored of the shiny veneer of Nazi chic without thinking overmuch about the actual content of Nazi ideology.

No, I’m not defending what he did. Turning a government that murdered millions of people into a fashion statement is grotesque and I wish he hadn’t done it. And yet, again, it’s hard to imagine a Bowie, having had the idea for the Thin White Duke, choosing to reject it as tasteless and offensive and still being David Bowie.

Take an example of someone who’s still alive--take the gratuitous roasting Mel Gibson got at the Golden Globes from Ricky Gervais.

Yes, Gibson’s scary public meltdowns and odious racist views are old news, largely because he’s been kept out of the spotlight against his will by the public refusing to accept him back. Nothing about the passage of time particularly makes me inclined to forgive him for abusing his girlfriend or getting caught spewing anti-Semitism in public after making a pretty damn anti-Semitic movie.

But as a die-hard Mad Max fan who’s passionately in love with critical darling “Mad Max: Fury Road” I have to say--there’d be no “Fury Road” without the past Mad Max films, and there’d be no Mad Max franchise without Mel Gibson. If George Miller and the producers of the Golden Globes wanted Mel Gibson there to present “Fury Road” then they had every right to have him there.

After all, the original “Mad Max” film with its shoestring budget and no-name cast launched Gibson’s career just as he carried the movie--the success of the film and the actor can’t be separated. There’s a story that the then-unknown Gibson came in to audition for the film after having been in a drunken bar brawl the night before, and Miller cast him on the strength of his authentically battered and bloodied features.

Whether or not that’s the case, the self-loathing toxic masculinity roiling inside of Max Rockatansky has always, to me, felt linked to Mel Gibson’s real-life persona. I don’t pretend to be able to diagnose everything that’s gone on with Mel Gibson over the years any more than any other gawking bystander—but from being raised by a hardcore fundamentalist Catholic/conspiracy theorist/”Jeopardy!” champion to struggling with the explosive combination of bipolar disorder and alcoholism, the impression I’ve always gotten from him is a mask of movie-star good looks covering up a deeply, deeply fucked-up dude.

That’s what’s made his most famous film roles work, that constant hint of unhinged mania behind his eyes, from playing Fletcher Christian to the titular “lethal weapon” psycho cop Martin Riggs in “Lethal Weapon” to, yes, Mad Max.

Is it theoretically possible that someone without Gibson’s particular personal problems could’ve met George Miller in 1977 and still given the performance that made the film work? Sure, I guess. Tom Hardy deserves credit for doing a ton of method acting to re-create the Mad Max character while generally being a pretty swell guy in real life.

But that isn’t what happened. And in the case of Mad Max in particular, one of those rare lightning-in-a-bottle cases where a movie with a budget of $350,000 becomes a breakout hit and a historic film franchise, it’s hard to imagine any of it happening any other way.

So yes, in a way I am saying that if you’re a fan of the awesome feminist triumph that is 2015’s “Mad Max: Fury Road,” then you owe something to the horrific abusive racist bigot Mel Gibson. You don’t have to like him or “forgive” him, but if he hadn’t been there--and I’m not just arguing in terms of acting talent but in terms of all his deep and wide-ranging flaws--then a great work of art might not exist.

Or take one of my favorite films that I’ve only ever seen once--the film adaptation of “Death and the Maiden,” which is one of the most complex and sensitive portraits of sexual assault from the perspective of both victim and assailant I’ve ever seen. I was about to recommend it to a friend until I looked at the IMDB page and saw the director, the man who had such a deeply personal perspective on long-buried guilt over long-ago sin: Roman Polanski.

It’s not just like that in the arts. If you’re a fan of “Hamilton” then you know that Alexander Hamilton was, on a certain level, a selfish narcissist consumed by ambition, and his rival Thomas Jefferson a sheltered dilettante defined by his hypocrisy--and both men’s accomplishments were not in spite of but to some degree because of those flaws. Someone who was less of an obsessive control freak wouldn’t have written the Federalist Papers, just as someone who was less of a detached idealist wouldn’t have written the Declaration of Independence.

Or, to take a more contemporary example, Ted Kennedy spent his life fighting for the less fortunate and the underprivileged, including and especially women. Ted Kennedy killed a woman in 1969 in a stupid drunken accident and escaped consequences for it because of his name and his stature. After he died--40 years after the death of Mary Jo Kopechne--some commentators connected the two, speculating he was driven partly by guilt. I can’t imagine that no connection existed, but does the horrific crime taint the lifetime of service, or the lifetime of service redeem the horrific crime? Or both? Or neither?

It strikes me that these questions matter most when a person is alive, when you’re deciding whether to elect someone to office or give them an award or pay them money. I know that the biggest reason I’ve never watched “Death and the Maiden” again is not wanting to funnel revenue toward someone I consider a fugitive from justice.

But I’d like to think after death is when we can get the whole picture of a life and see life as more complex than just adding up a list of merits and flaws and seeing which side of the ledger wins.