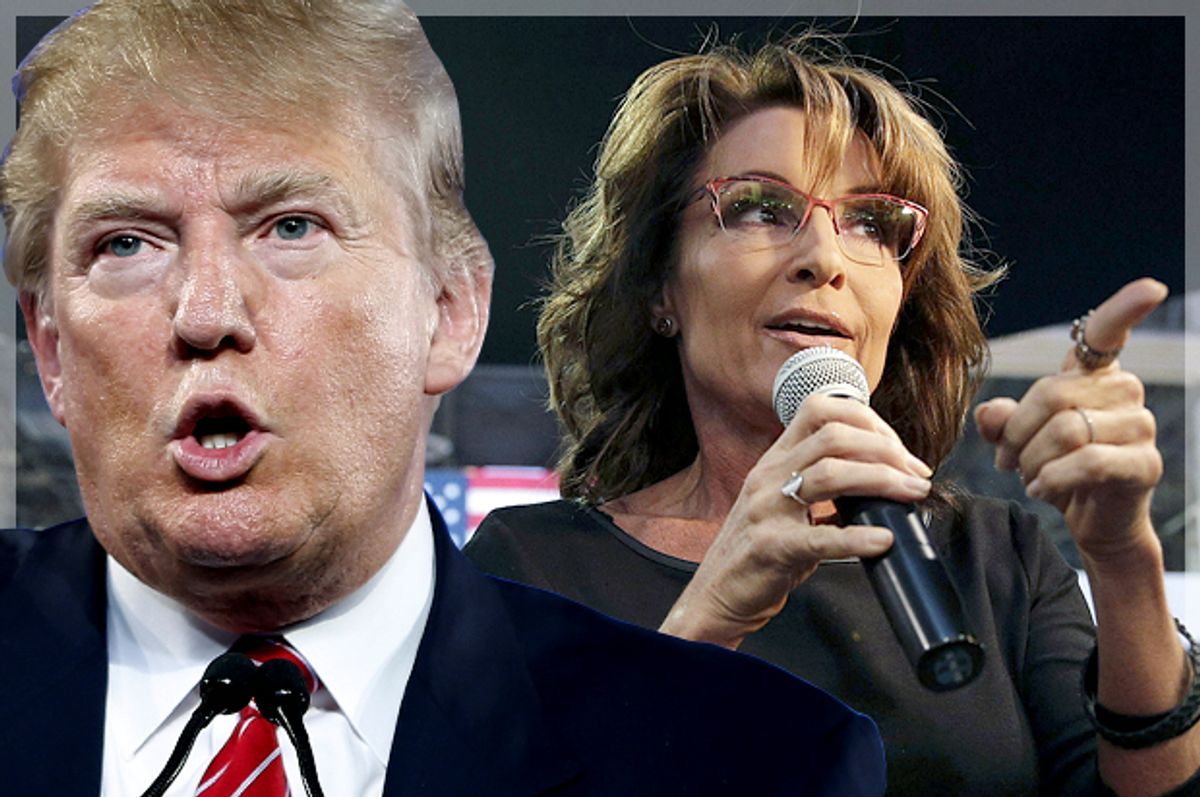 It was inevitable that Sarah Palin would endorse Donald Trump for president, or Donald Trump would endorse Sarah Palin for president, from the moment she arrived in New York on her "will she or won't she" One Nation tour back in 2012. The two reality TV celebrities munched pepperoni pizza together and chewed the fat about politics and media stardom as news cameras, paparazzi and tourists all took pictures from the other side of a window. The cable news networks all excitedly carried the silent luncheon live on TV. It was reported in Entertainment Weekly, as well as the New York Times.

After being slagged by fellow New Yorkers for eating his pizza with a plastic knife and fork, Trump issued a Youtube video explaining that he doesn't carry regular knives and forks with him and it makes it easier for him to avoid the carbs in the crust. (One can only speculate what the ghost of John Wayne,Trump's other endorser yesterday, would have thought of that.) He didn't support Palin for President at the time -- he was considering a run himself after all -- but he did express his great admiration for her and speculated that she would be "a factor" if she were to make a run for it. Yesterday, Palin repaid the compliment in spades with a full-throated, star-spangled endorsement of the Donald.

And after teasing the endorsement for a couple of days, simply saying something "great" was going to happen on Tuesday, Trump once again demonstrated his total mastery of the political media by dominating the airwaves for an entire news cycle as a dozen other candidates gasped desperately for airtime. He even timed it at the end of the day and made sure that the cable networks didn't know the details so they'd run his own tedious opening speech before Palin stepped up. Then they ran her entire speech (if that's what you want to call it --- it was more of a surreal, tribal tone poem).

The only other candidate who got any airtime yesterday was poor Ted Cruz who was obviously personally devastated by Palin's defection, apparently never having noticed before that she is a political celebrity not a serious person devoted to the conservative cause. After all the time they spent together campaigning during his Senate run in 2012, you'd think he'd have some sense of her true character. After all, what does Cruz have to offer Palin? Trump has billions of dollars and major media mojo. Of course she would jump at the chance to guest on his hit show.

It was startling to hear the two political celebrities back to back and realize how perfectly they speak the same strange, rambling, emotionally compelling nonsense language. It's a style that sounds and feels like talk radio; the cadence is the same type of conversational ranting, which explains the sense of identification and familiarity their fans feel toward them. But when you listen to the words (to the extent they make any sense) you realize it isn't the same at all. They aren't talking about conservatism. They're talking about something else entirely.

This article by Michael Brenden Dougherty in The Week offers an interesting theory as to what that is. He unearths an old piece written by Samuel Francis, an erstwhile conservative thinker turned full-blown white supremacist who offered some advice to an earlier version of Trump, Pat Buchanan, back in 1996. Francis wrote:

[S]ooner or later, as the globalist elites seek to drag the country into conflicts and global commitments, preside over the economic pastoralization of the United States, manage the delegitimization of our own culture, and the dispossession of our people, and disregard or diminish our national interests and national sovereignty, a nationalist reaction is almost inevitable and will probably assume populist form when it arrives.

He goes on to describe a new movement which dispenses with the pose of "conservatism" once and for all, and especially with the activists and the movement professionals he called the "hangers-on, direct-mail artists, fund-raising whiz kids, marketing and PR czars, and the rest of the crew that today constitutes the backbone of all that remains of the famous 'Conservative Movement,' who never fail to show up on the campaign doorstep to guzzle someone else's liquor and pocket other people's money." He said a direct nationalist pitch to the interests of the white working class (what he called "Middle America") was the key to victory. He doesn't suggest a slogan like "Make America Great Again," but he might as well have.

Buchanan didn't take his advice in '96. He was still wedded to his version of paleo-conservatism and loyal to the Republican Party despite his undisguised xenophobia and racism. Trump, however, is following the path Francis laid out 20 years ago with aplomb. He's running for all intents and purposes as a white nationalist, fuming at the failures of the governing classes of both parties and promising to restore dominance and "pride" to his followers. Small government conservatism as we've known it is not just under siege, it's entirely irrelevant.

But both Trump and Palin before him have taken this to another level and created a whole new political form with which to sell this concept. They are performers first and foremost who use familiar conservative concepts and phrases and strip them of meaning, leaving only the sense of tribal solidarity. Here's one bit from Palin's performance yesterday:

“This election is more than just your basic ABCs, anybody but Clinton. It’s more than that this go-around. When we’re talking about a nation without borders. When we’re talking about bankruptcies in our federal government. Debt that our children and our grandchildren, they’ll never be able to pay off. When we’re talking about no more Reaganesque power that comes from strength. Power through strength. Well, then, we’re talking about our very existence, so no, we’re not going to chill. In fact it’s time to drill, baby, drill down, and hold these folks accountable. And we need to stop the self-sabotage and elect new, and independent, a candidate who represents that and represents America first, finally. Pro-Constitution, common-sense solutions, that he brings to the table. Yes the status quo has got to go. Otherwise we’re just going to get more of the same, and with their failed agenda, it can’t be salvaged. It must be savaged..."

It doesn't make rational sense, but it makes emotional sense. Trump does the same thing but he goes a step further: He claims all that power for himself. He's the first to tell you that he's the strong man, he's the popular man, everyone loves him. The world's gone to hell in hand basket and America is crippled, but Donald Trump can save it all. Just look at his poll numbers.

The irony is that the forces that got Trump where he is today are those same conservative movement leaders who have been running against "the establishment" since the 1970s, making money off of every defeat and claiming that every victory was compromised by corruption. These are the people who have demanded politicians make promises they cannot keep so they can then claim they've been betrayed and start the wing-nut welfare cycle all over again. They are the ones who have created the conditions in our government which make it impossible for anyone to address the material concerns of these angry, frustrated people. And now it's being turned back on them.

The highest levels of the conservative intelligentsia recruited Sarah Palin to be their star. ("She sent little starbursts through the screen.") John McCain actually chose her to be his Vice President, an act of irresponsibility that will always be the worst black mark on his legacy. But she "went rogue" very early on, refusing to learn and refusing to work, wanting simply to appear before adoring crowds and ramble incoherently about "America." The crowds loved it for a while. But let's face it, Sarah Palin from Wasilla was never going to be the strong leader for whom these people yearn, even if she had the ambition, so she veered off into political show business and left real politics behind. Donald Trump, the billionaire bully, is that leader.

Conservative New York Times columnist David Brooks hysterically called yesterday for yet another movement to be formed to stop Trump and Cruz. But the people who listen to David Brooks already did their best to do that. It's called the Jeb Bush campaign and the results are uninspiring to say the least. Talk radio hosts are now taking their turn, threatening to tell their audiences about how liberal Donald Trump really is now that he's gone after their avatar, Ted Cruz. But they seem not to have realized that Trump's voters don't care about ideology.

The Republican pollster Frank Luntz held a focus group a few months back that he famously claimed "made his legs shake," it was so shocking. He found that the more people criticized Trump, no matter what the criticism, the more his supporters liked him. Whether he was exposed as rude, liberal, hypocritical, dishonest -- it didn't matter.

When asked for words to describe him they said: “Tough.” “Great.” “Successful.” “Not afraid.” “Leader.” “Has guts.” “Charismatic.” “A true American.” “Kicks ass and takes names.” If you go through Sarah Palin's rambling speech yesterday you'll find every one of those words and phrases. They appear in most of Trump's as well.

It's tempting to look at both of these characters and write them off as jokes. They truly are ridiculous in a dozen different ways. But their combination of modern media celebrity and white nationalism is something new and potentially very powerful in American politics, if Trump manages to pull off this nomination. These conditions have been ripening for years, waiting for someone to take advantage. Trump is nothing if not a world class opportunist.