The raging idiocy of the GOP's masculinity brigade 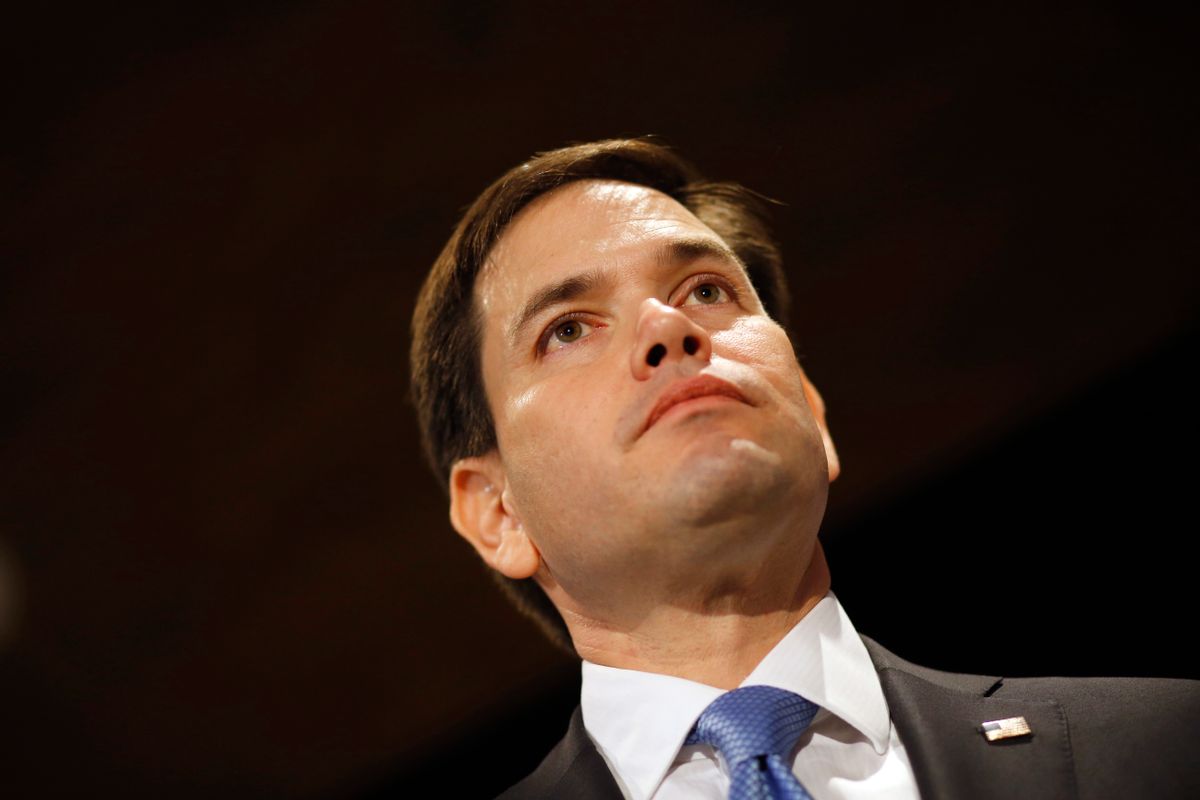 It always seems like a healthy sign for American democracy when the back-and-forth between presidential candidates becomes the political equivalent of Butthead needling Beavis for not being enough of a man.

But that is where the Republican primary is right now, with no less an outlet than the New York Times running through a list of recent attacks on Marco Rubio -- over, among other things, the high-heeled boots he was photographed wearing recently, then scrambling to assure readers that “In truth, there is nothing especially effete about Mr. Rubio.” After all, he’s the son of working-class immigrants! He loves football! He bought a boat! Why, the man has so much testosterone he’s selflessly donating the excess to low-t orphans! (I made one of those up.)

The undertones of fifth-grade gay panic aside, the trope of a male candidate being an over-refined wimp eschewing masculinity in favor of his sensitive (read: feminine) side is one of the most pernicious and annoying cliches in politics. Yet it persists in election after election. In the 1980s, Ronald Reagan’s advisors made sure he was photographed chopping wood and riding horses at his ranch in California. In 2000, Republicans and the media portrayed Al Gore as an effete, tree-hugging liberal while George W. Bush was a man whose favorite pastimes included riding mountain bikes and clearing brush on his Texas ranch. Bush’s opponent in 2004, John Kerry, was a fancy-pants rich boy who spoke French and liked — *gasp* — windsurfing, while Bush was a tough leader who would don a flight suit and land a plane on the deck of an aircraft carrier. So manly.

Maybe it’s the steroidal insanity of this election cycle, or maybe the Republican candidates seem particularly sad and desperate as they try to distinguish themselves in this crowded field, but the attempts to out-macho each other feel particularly desperate this time around. It starts, as do so many things these days, with Donald Trump, who spent the early part of the campaign sliming Jeb Bush as a “low-energy” candidate who could not keep up with the virile real-estate developer.

Since then it has been a long mix of tough policy positions and personal choices intended to signal to the electorate that each candidate is more macho than the others. Rubio, for example, let everyone know recently that he spent Christmas Eve buying a gun and stands ready to use it to defend his family in the unlikely event that ISIS invades Miami Beach.

Ted Cruz, meanwhile, famously cooked machine-gun bacon to prove his bona fides as a man who can shoot a gun and eats processed salted meats, instead of arugula like that wimpy President Obama. Then he smeared on face paint and went duck-hunting in the Louisiana bayou with Phil Robertson, God-fearing and gay-smearing religious patriarch of the clan from “Duck Dynasty.” Just a couple of guys wearing camo and carrying guns through the woods in order to shoot animals that they will then bring home to feed their families.

On foreign policy, every candidate has raced to sound like the big tough man or woman in the room. Carly Fiorina’s foreign policy will involve her basically telling Vladimir Putin and the Iranian mullahs to cut the shit. Cruz will bomb Middle Eastern terrorists back to the Stone Age, while Rubio will give them all one-way tickets to the prison at Guantanamo, where they will be tortured until they tell us everything they know. Chris Christie will also be tough on everyone, starting with our “petulant child” of a president, whose tuchus he intends to kick out of the White House at the end of the year.

This level of chest-thumping, as if the candidates were competing to see which one of them can be the troop’s dominant silverback, would be laughable if it didn’t work so well on the GOP base. Take a swing through the fever swamps of right-wing media and blogs, and you’ll find the same sort of overblown masculinity masquerading as toughness, most notably when the subject of gun control comes up. We have a ridiculous need to see our presidents as daddy figures who will protect us from the big, scary terrors of the world – crazed jihadists, the Russians, the North Koreans. So in the presidential derby, the person who can thump his chest the loudest wins.

This type of overhyped masculinity is nothing new to American culture, but with presidential elections it was always seemingly tempered by a candidate’s necessary rationalism, a worldliness that followed Teddy Roosevelt’s dictum to “speak softly and carry a big stick.” Even Ronald Reagan, a man who seemed to view everything through the prism of the movies in which he first made a name for himself, knew enough to conduct diplomacy with foreign powers instead of endlessly threatening them.

Not this year. Now we have candidates who carry that big stick while roaring like particularly deranged Godzillas. It’s obnoxious and off-putting and, when you consider that the winner of this election will have the keys to the world’s largest military at his or her fingertips, quite dangerous.