"16 shots & a cover up — Resign Rahm": Calls for Chicago Mayor Emanuel to step down get louder amid more scandals 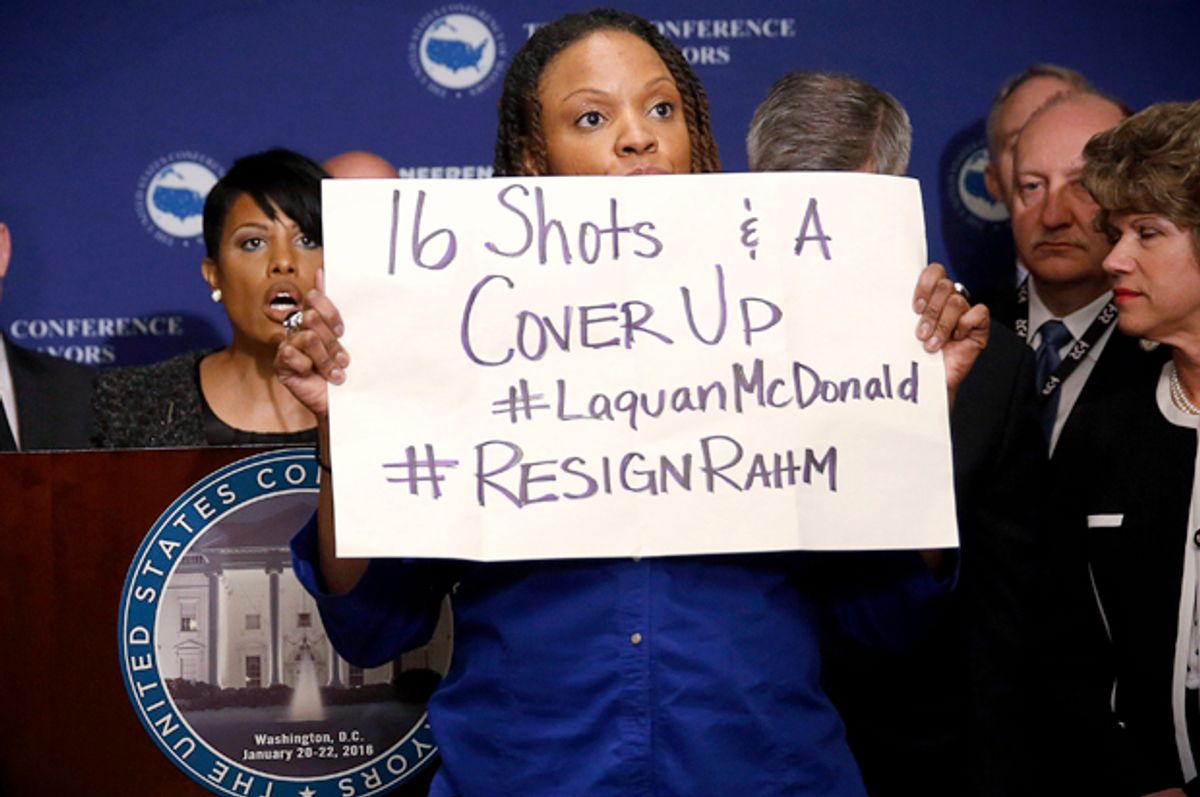 Calls for the resignation of Chicago Mayor Rahm Emanuel have accelerated in recent weeks, amid a series of racially charged police brutality scandals.

Black Lives Matter protesters disrupted the U.S. Conference of Mayors on Wednesday in a demonstration calling on Emanuel to step down.

April Goggans, 36, interrupted a speech by Baltimore Mayor Stephanie Rawlings-Blake. Goggans walked in front of the official, carrying a sign reading "16 shots and a cover up #LaquanMcDonald #ResignRahm."

Laquan McDonald, black 17-year-old, was unarmed when he was shot and killed by a white Chicago police officer on Oct. 20 2014.

Police originally justified the shooting claiming McDonald lunged toward them, threatening them. Dashcam video footage released in November after Freedom of Information Act requests from journalists and pressure from activist groups, however, showed that McDonald was in fact feet away and walking in the opposite direction when the cops shot him 16 times.

Activists have accused the Emanuel administration of covering up the killing.

Despite misleading comments to the contrary, Emanuel knew that McDonald was brutally killed many months before the video was released to the public. Stephen Patton, Chicago's corporation counsel, informed the mayor in March 2015 what the dashboard footage showed.

City of Chicago lawyers and Emanuel subsequently agreed to offer the McDonald family $5 million in hush money, in return for keeping the video confidential for years. An election was approaching, and Emanuel knew he might lose if the world learned what his administration was hiding.

This is just one of the several scandals that has racked the Emanuel administration in recent months.

In late December, Chicago police shot and killed 55-year-old black mother Bettie Jones, along with 19-year-old "whiz kid" engineering student Quintonio LeGrier. The police claimed it was an "accident," but activists and community members protested, arguing it is yet another example of the rampant police brutality in their city.

Moreover, in February, it was exposed that Chicago police had been operating a "black site," an off-the-record compound in which authorities were harshly and violently interrogating suspects, the vast majority of whom were black.

Chicago police have a long history of torturing primarily black suspects. In May, after years of protests and organizing, activists pressured the Chicago government to create a $5.5 million reparations fund for victims of police brutality.

The protest Wednesday at the U.S. Conference of Mayors is just the latest demonstration in a long line.

Other Black Lives Matter protesters who interrupted the event told The Huffington Post "We will not be silenced. We will not bow down. We will not go away until our voices as people, as citizens, as human beings, as black bodies in this city are heard."

Baltimore activist Shai Crawley, 20, accused the U.S. Conference of Mayors of hypocrisy for using the slogan "Invest and protect."

Protester Duane "Shorty" Davis condemned the widespread poverty and lack of good jobs in Baltimore, while the city is being gentrified. He proclaimed "You're pushing blacks out of Baltimore so all they do is clean your bathrooms and fix your beds, cut your grass. There's no careers in Baltimore for black people -- just jobs."

His administration has shut down public schools en masse, particularly in poor neighborhoods and communities of color, inspiring a month-long hunger strike in protest. Emanuel has also privatized many state assets, and pursued business-friendly policies.

The protests against the Chicago mayor have led presidential candidate Bernie Sanders to condemn Emanuel, and insist that he does not want to be associated with him. Despite the scandals, nevertheless, fellow Democratic candidate Hillary Clinton has stood by Emanuel, who has long been her friend and ally.