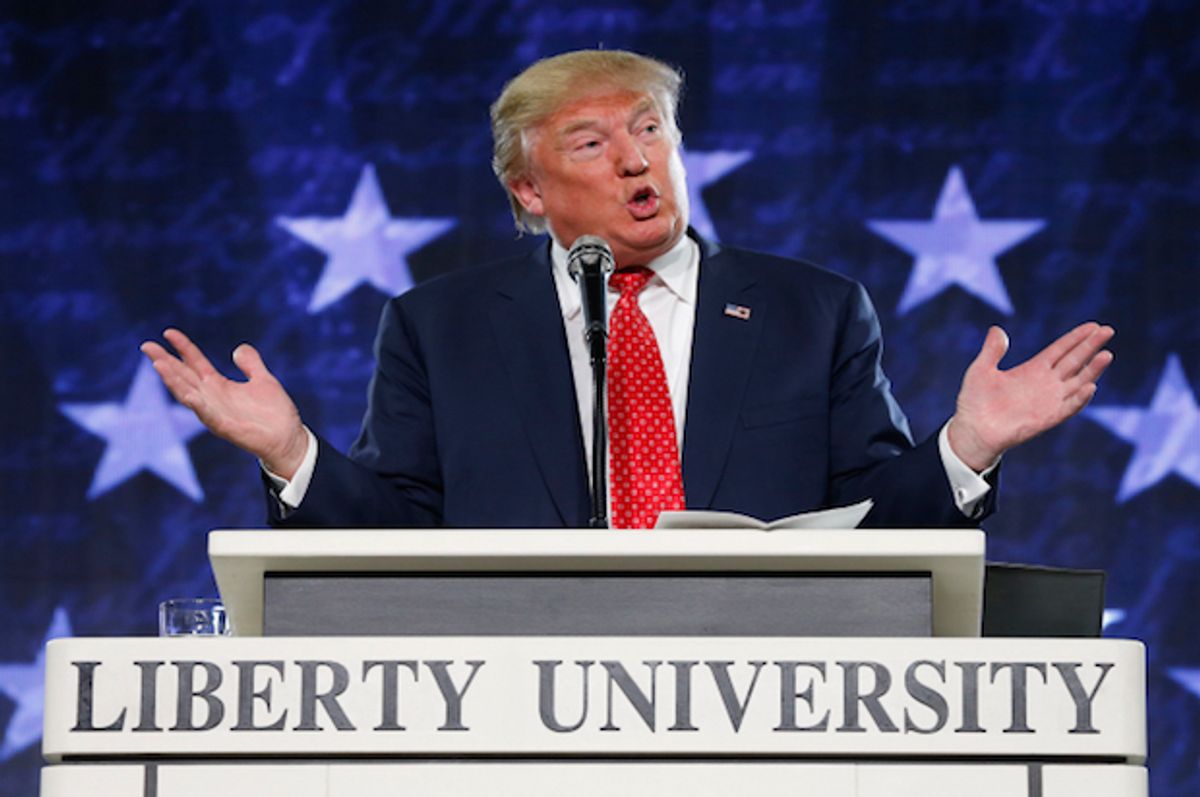 On Monday, Donald Trump gave a speech at Liberty University, the Christian school founded by the deceased swindler, Jerry Falwell. It's no surprise that Trump is pandering to the religious right: He's a salesman and Christians are a key demographic in the Republican Party. The speech itself was laughable on its face, as you'd expect.

Trump doesn't care about Christianity, and his only religion is self-promotion. The specactcle of Trump pawning himself off as a believer was something to behold, however. The real estate hustler began with a botchted attempt at quoting scripture: “Two Corinthians, 3:17. That's the whole ballgame. 'Where the spirit of the Lord is, there is liberty.' And here is liberty.”

The students in attendance couldn't help but laugh, as the normal reference to that chapter is “Second Corinthians,” not “Two Corinthians.” But Trump, having been given this line by handlers minutes before taking the stage, was likely just reading the script. Had he (or anyone on his staff) any familiarity with the Bible, he'd have recognized this immediately.

Trump continued his rambling speech undeterred, offering a few perfunctory nods to Christianity. “The Bible is the best,” he declared at one point, followed by this gem: “You're going to see 'Merry Christmas' in department stores, believe me.” Like everything else Trump says, this is empty drivel. The notion that the president can dictate how department stores handle Christmas greetings is ludicrous, but that's beside the point – no one supporting Trump seems to care about what he can actually accomplish as president. It was enough that Trump promised to "protect Christians," whatever that means.

This was Trump selling himself to an already compromised religious right. In recent decades, the evangelical community has steadily debased itself for votes, choosing political power over religious integrity. Part of the reason for this is crackpots like Falwell and Pat Robertson, who aligned themselves with the Republican Party in order to bolster their brands and grow their bank accounts.

The hucksterism of Falwell Sr. and Robertson was on full display at Liberty this week. Jerry Falwell Jr., the son of the late Falwell and Liberty University's current president, spent roughly 10 minutes fawning over Trump in his introductory remarks. “As our friendship has grown, so has my admiration for Mr. Trump,” Falwell said. After comparing Trump to his father and (I'm not kidding) Martin Luther King, Jr. and Christ., he added that Trump is a “breath of fresh air.” “In my opinion,” Falwell continued, “Donald Trump lives a life of loving and helping others, as Jesus taught in the great commandment.”

The comparison between Trump and Falwell Sr. is apt, as both men are vile opportunists preying on credulous idiots (although I imagine this wasn't what Falwell Jr. had in mind). But likening Trump to Martin Luther King Jr. and Christ is preposterous and an insult to thinking Americans. Trump is a religious illiterate whose adult life in affront to the core message of the Gospel. Falwell's glowing remarks reveal, to no one's surprise, where his real interests lie.

But it's not just Falwell Jr. supporting the GOP's newest charlatan. Trump continues to lead among white evangelical voters, and that's an indication of the discontent and rot at the core of the religious right in this country. In his remarks, Falwell Jr. said that “conservatives and evangelicals have chosen the political candidates who have told us what we wanted to hear on social, religious, and political issues, only to be betrayed by these same candidates after they were elected.” Perhaps that's true, but what possible reason is there to back Trump, a secular demagogue merely paying lip service to Christianity?

As I wrote earlier this year, the religious right long ago abandoned the actual tenets of Christianity in favor of greed and political expediency. They've embraced Christian libertarianism (a contradiction in terms if there ever was one) and fixated themselves on the so-called “Culture Wars,” which is why Trump's line about “Merry Christmas” is likely to play well among religious voters. That Trump, an ethno-nationalist more than a Christian, is popular with this constituency proves that they'll follow anyone who fans their fears and indulges their persecution mania, no matter how implausible the candidate or how false the promises.