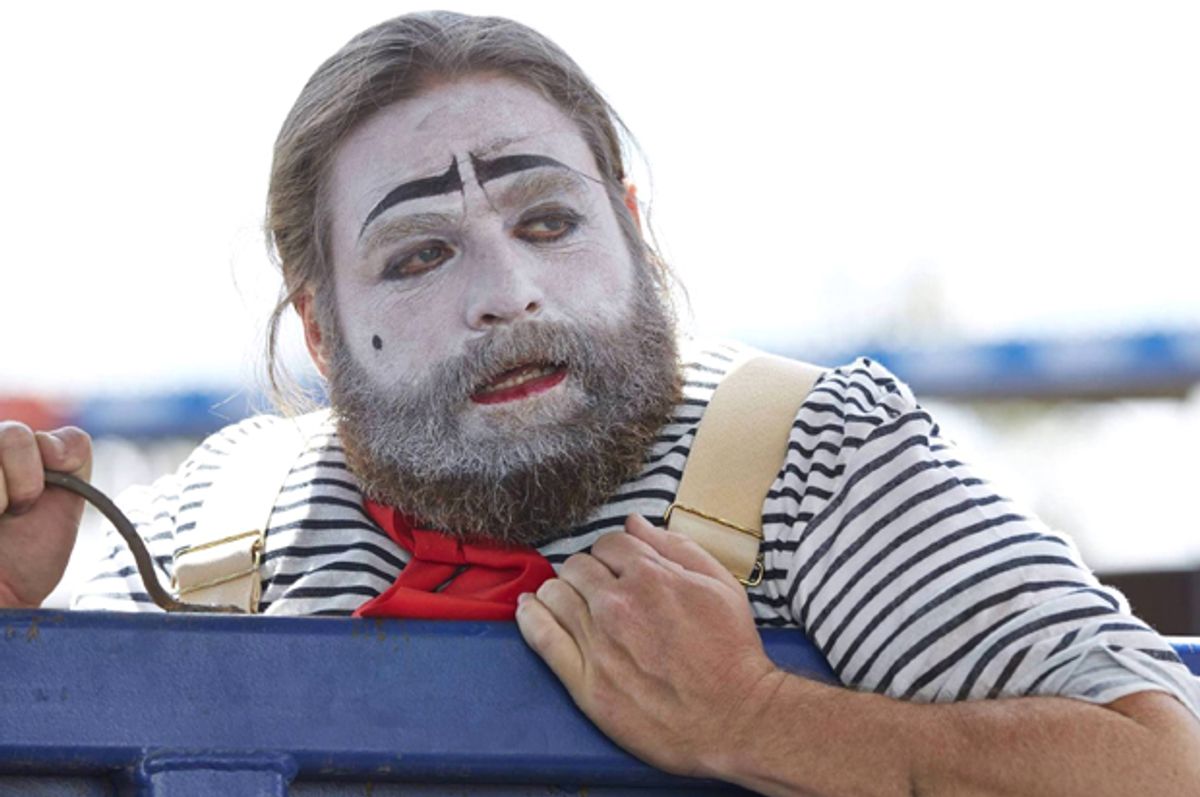 Comedy—the art of making other people laugh—is so mysterious and unquantifiable that at times it seems less like craft and more like magic. What makes one person laugh uncontrollably might confuse another, or push a third into stony, uncomfortable silence. So much of the art comes down to timing, and context, and audience; it’s one of the most fluid and slippery crafts to define or reproduce, and yet one of the most rewarding.

It’s hard not to ponder this when watching FX’s new comedy series “Baskets,” created by Louis C.K., Jonathan Krisel, and Zach Galifianakis. C.K. has his own award-winning comedy, “Louie,” on the same network; Krisel is instrumental to both “Portlandia” (IFC) and “Man Seeking Woman” (FX). And Galifianakis, who is probably best known for his absurd turn in smash-hit bro-franchise “The Hangover,” has won two Emmys for his short program “Between Two Ferns With Zach Galifianakis,” which in 2014 interviewed President Barack Obama. All three have different comedic styles—“Louie” is morose and sharp, “Portlandia” and “Man Seeking Woman” are surreal and loopy, and Galifianakis’ comedic performances are physical, squirming renditions of the loser experience. The first five episodes of “Baskets” are, satisfyingly, a combination of all of those moods—pathetic, absurd, jerk-comedy with weirdly compelling meditation on the fundamental nature of being a comedian.

It’s less clear to me if it’s funny, though.

In the show, Galifianakis plays a frustrated clown named Chip Baskets, who prefers to go by the stage name “Renoir.” When we first meet him, he is at a rigorous clown university in France, which is unfortunate, because Chip does not speak French. Still, he takes his craft very seriously, and when he is forced to move back home to Bakersfield, he assiduously attempts to find a well-paying gig that lets him pursue his art. What he finds is a part-time job as a rodeo clown, and a ragtag community that understands him about as poorly as the French-speaking city he came from.

Chip is not an easy person to love. He’s a frustrated, pathetic man, trapped between his failed aspirations and his considerable pride in his work. He draws people around him, somehow, but he’s dissatisfied with all of them—either because they don’t care for him, or because he doesn’t care for them. His insurance agent Martha (Martha Kelly) is one of them, a kind but odd woman who just starts helping Chip without being asked. His mother Christine is another, played by longtime comedian and personality Louie Anderson. Yes, it’s a drag performance; but unlike comedies like “Gigi Does It” or even the frequent gender-bending of “Portlandia,” it’s surprisingly touching. By the fourth episode, Christine and Chip are navigating a tense but affectionate relationship, making for some of the most rewarding on-screen real estate.

As my colleague David Sims wrote at the Atlantic, “Baskets” is rooted in a tradition of alt-comedy that might fly right by anyone who isn’t steeped in that scene. For me, the landing of some gag or another was so satisfying and hilarious that I wondered what I was missing with the rest of it. For example, there’s an absurd preponderance of Costco and Costco products, such as the Kirkland Signature brand, in “Baskets.” Martha works at Costco; Christine is obsessed with it; Chip’s rodeo is sponsored by the company; and every episode seems crammed with products and references. At first I thought it might be particularly ham-fisted product placement, but by the fifth episode, the Costco references are so frequent and pointed that it’s part of the show’s long-running joke. The writers of the show wanted a feeling of authenticity, so they contracted with Costco. Louis C.K. told the Television Critics Association: “You’re not insulting Kirkland if you say their shit is everywhere.” It’s a fitting microcosm for the odd appeal of the whole show: An absurdity that is disturbing real, funny at times, and depressing at others.