Conservatives in a meltdown: National Review's confused "Against Trump" issue is an amazing testament to the right's implosion

The National Review takes a shot at Trump and it's a wide, and unintentionally hilarious, miss 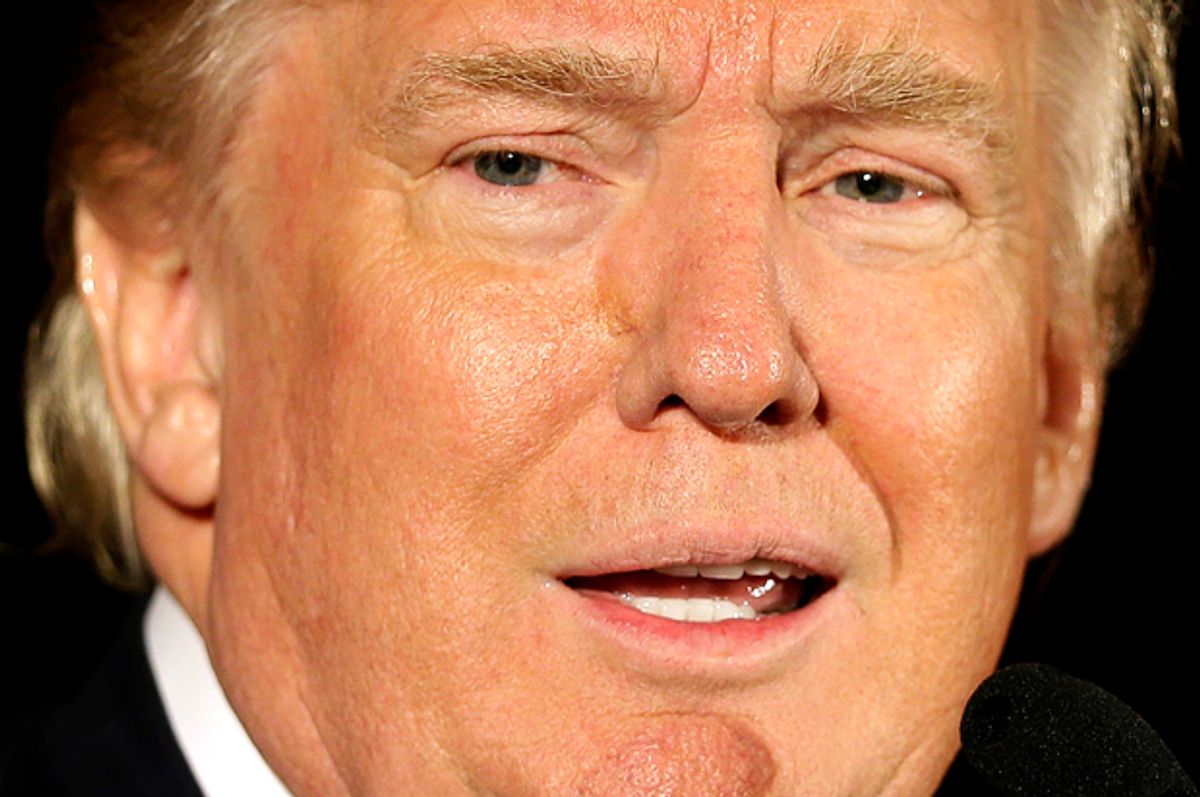 The big release of the latest National Review edition, with a cover declaring "Against Trump," on Thursday night was above all other things a wonderful gift not just to liberals, but anyone who lives outside of the conservative tribe. Because it gives us a glimpse, however temporary, of what it feels like to be a Trump supporter. I defy readers to take one look at the cover and not feel an overwhelming surge of contempt for these establishment conservatives who love to pander to the camo-crowd when it suits them, but get fussy when the rubes rise up and start demanding real skin in the game. You want to rub their smug little faces right in Donald Trump's ridiculous hair and ask how they like those apples.

Any discerning reader knows that, on some level, you're meant to root for the monster to turn on Dr. Frankenstein, for the Pied Piper to take the children away, for Satan to finally come for Dr. Faustus. And so it's impossible not to take pleasure in watching the conservative base come extract its pound of Trump-shaped flesh out of the establishment.

It's no mystery why the National Review and their supporters hate Trump. He's vulgar and embarrassing and he does an even better job of exploiting the right-wing rubes and their racism and their provincialism and their ridiculous sense of oppression than they do. They are, in other words, haters. And Trump dismissed them as the haters they are with ease during his press conference Thursday night where he called the National Review a "dead paper" that almost no one reads anymore.

This impression is driven home by actually reading the issue. The editors can't quite seem to decide what their exact objections to Trump are. Is it that he's driving the right too far in the direction of fascism or that he's a secret liberal in disguise? Both! Whatever you need to hear! The strategy is argument through overwhelming. They'll throw everything they've got, even contradictory stuff, at the reader and hope the sheer volume of words impresses them enough to vote for Marco Rubio or Jeb Bush.

The everything-and-the-kitchen-sink strategy produces some hilarious contradictions. The main anti-Trump editorial, written by the editors, darkly warns that Trump isn't the racist that his followers think he is. "Trump says he will put a big door in his beautiful wall, an implicit endorsement of the dismayingly conventional view that current levels of legal immigration are fine," they write, even trying to get the reader to believe that Trump's mass deportation plan is "poorly disguised amnesty".

But then, in the writer round-up, we're hearing a different story. "Not since George Wallace has there been a presidential candidate who made racial and religious scapegoating so central to his campaign," David Boaz sniffs, adding that America "aspired to rise above such prejudices and guarantee life, liberty, and the pursuit of happiness to everyone."

So which is it, guys? Is Trump offensive because he's too nativist or because he's not devoted enough to keeping the foreigners out? Whatever will make you not vote for him, I guess.

A similar question emerges when it comes to the conservative obsession with masculinity, which they confuse with strength. The editors write that Trump "has an astonishing weakness for flattery, falling for Vladimir Putin after a few coquettish bats of the eyelashes from the Russian thug."

On the other hand, Ben Domenech worries that Trump is "a tyrannical monarch" who he believes is too eager to "impose [his] will on the nation". Mona Charen chimes in agreement, saying "conservatism implies a certain modesty about government."

So which is it? Does a big ego make one weak or is the problem that it makes one too strong and authoritarian? Both, I guess! Depends on if you're more of an anxious masculinity conservative or if you're one who likes to delude yourself into believing you're a libertarian sort. Either way, don't vote Trump!

The self-contradictions are particularly amusing, to me at least, on the issue of women. Charen denounces Trump for his need to "constantly to insult and belittle others including, or perhaps especially, women". But she and many of the other writers also warn the reader about Trump's pro-choice past, insinuating that he's not on board with the anti-choice movement. A movement, may I remind you, that is passing mandatory ultrasound and waiting period laws and other medically unnecessary regulations, for the purpose of insulting and shaming women.

This self-important National Review manifesto can't even decide how to feel about the practice of insulting and belittling people. On one hand, as Charen writes, they believe it's a sign of "a pitifully insecure person". What then to make of the fact that much of the anti-Trump argument is rooted in cheap shots at the man, from the you're-a-girl insult regarding his behavior around Putin to Mark Helprin's swipe at Trump for having "hair like the tinsel on discarded Christmas trees". I guess everyone at the National Review is a "pitifully insecure person", so why is it only a crime when said insulter is Donald Trump?

Is it because he's better at it than you guys?

It's tough to say what the National Review expected out of this, besides selling more issues. And even that has a strong possibility of backfiring, as this attack gave Trump an opportunity to imply, with cause, that they are using his name to bolster their declining sales.

If the idea was to pry base voters off Trump, good luck with that. All this does is confirm base voter suspicions that the conservative establishment sees them as a bunch of useful idiots who are to be slapped down the second they start thinking they have a real voice in the movement.

If the idea was to take a stand and lay out a clear line between the bellicose base and the more refined party elite, well, that's backfiring, too, as the RNC reacted to all this by disinviting the National Review to partner with them in the Republican debates.

In his anti-Trump screed, Ben Domenech gets on his high horse about how ours is supposed to be a "government of the people, by the people,"  which he claims Trump is threatening. Keep telling yourself that, buddy. Because it looks a whole lot like Trump's popularity is due to "the people" revolting against a system where the establishment calls all the shots. And National Review's flailing shows that the establishment has no idea what to do with that.