As the Western-backed war enters its 300th day, the Saudi-led coalition bombs a Doctors Without Borders ambulance 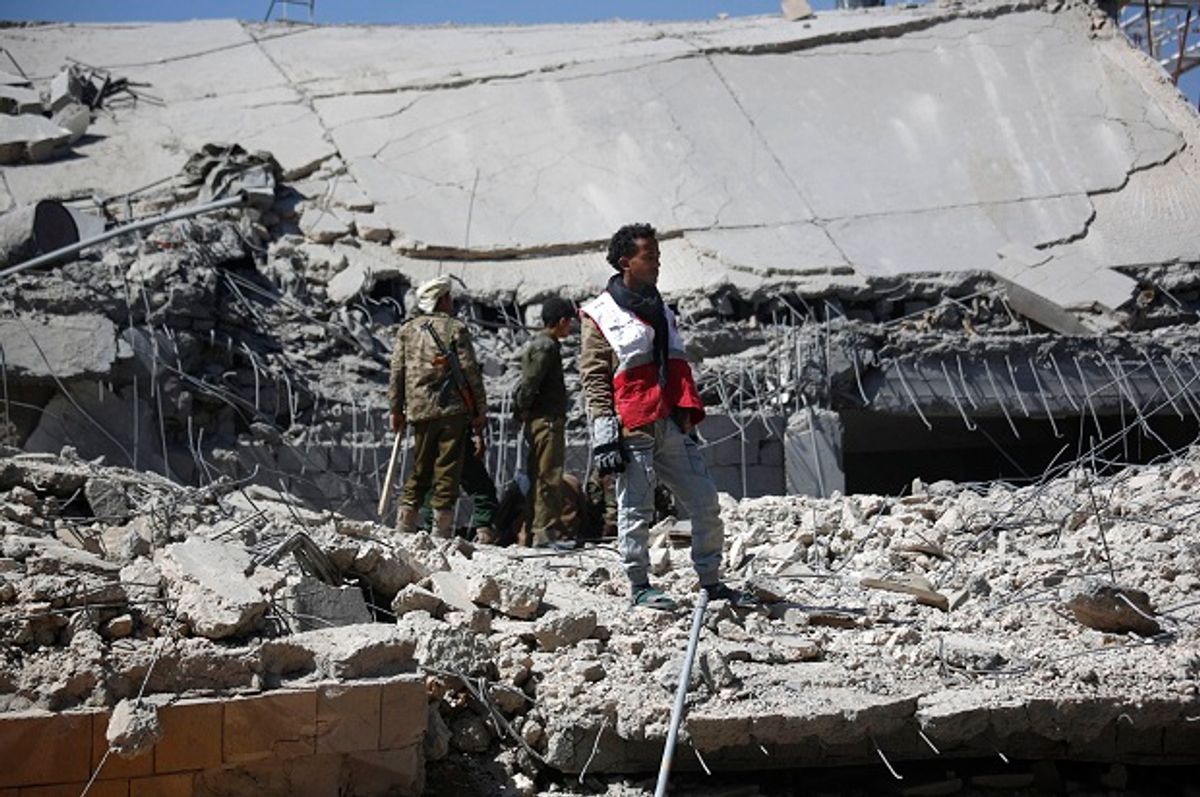 A medic stands on the rubble of the police headquarters after it was destroyed by Saudi-led airstrikes in Sanaa, Yemen, Monday, Jan. 18, 2016. (AP/Hani Mohammed)
--

Scores of hospitals and medical facilities in Yemen have been destroyed by the Saudi-led, Western-backed coalition, which human rights organizations have accused of committing war crimes.

New evidence suggests the Saudi military, which is armed and trained by the U.S. and U.K., might be purposefully targeting medical staff and rescuers.

A Saudi-led coalition airstrike struck the ambulance of the Doctors Without Borders-supported al-Gomhoury Hospital in Yemen's Saada governorate on Friday, killing the driver, who was a ministry of health staff member.

The ambulance had traveled to a site that had just been bombed in Dhayan, Yemen.

"Just as [the ambulance] arrived and people were gathering to assist the victims of the initial bombing, the same site was hit again with another airstrike, wounding many people," Doctors Without Borders, which is known internationally as Médecins Sans Frontières, MSF, said in a statement.

"A third strike was then launched, hitting the ambulance and killing its driver," MSF added.

"Double tap" refers to a military tactic in which an air force bombs an area immediately after hitting it the first time, in order to ensure there are no survivors.

The Israeli military is notorious for carrying out double-tap strikes in its summer 2014 war on Gaza, in which more than 2,250 Palestinians were killed, the vast majority of whom were civilians, according to the U.N.

This military tactic led to the deaths of many medical workers, who were trying to rescue the survivors of earlier strikes. The International Federation of Red Cross and Red Crescent said the Israel Defense Force's use of double tap strikes is one of the primary reasons that scores of its staff were killed and injured in the war, according to a report by Physicians for Human Rights.

The Saudi-led, Western-backed coalition appears to be taking this military tactic to the next level in Yemen, carrying out "triple tap" bombings.

This triple tap attack was not far from another MSF-supported medical facility, Shiara hospital, which was bombed by the Saudi-led coalition on Jan. 10, killing six people.

At least three medical facilities run by MSF have been destroyed by the Saudi-led coalition.

"This latest loss of a colleague is devastating, and it demonstrates the ruthlessness with which health care is coming under attack in Yemen," remarked Teresa Sancristoval, emergency coordinator at MSF, in a statement.

"People there are being subjected to this kind of violence on a daily basis. No one, not even health care workers, is being spared," Sancristoval added.

Three villages in Yemen's Saada Governorate were bombed by the U.S.-backed coalition on Friday, killing at least five and wounding 35 more.

Saudi Arabia began bombing Yemen on March 26, when it also imposed a blockade on the country, the poorest in the Middle East. Because of the bombing and blockade, for more than six months, human rights organizations and the U.N. have warned that 21 million Yemenis — 80 percent of the population — are in desperate need of food, water and medical supplies, and are facing "humanitarian crisis."

The U.S. has sold more than $100 billion in weapons to Saudi Arabia in the past five years, and the Saudis have dropped cluster bombs that were made in an Army factory in Tennessee on civilian neighborhoods in Yemen, in what Human Rights Watch called "outrageous" and a "war crime." Cluster munition are banned in 118 countries, although the U.S. and Saudi Arabia refuse to ratify the international treaty banning them.

Britain has also funneled weapons to the Saudis, despite knowledge that the extremist absolute monarchy is committing war crimes in Yemen. The U.K. sold Saudi Arabia more than $1.43 billion of bombs in just three months.

American and British military officials are in the command and control center for the Saudi bombing in Yemen, and have access to lists of targets.

Almost 3,000 civilians have been killed in Yemen since the war began, according to the U.N., and 5,300 more have been wounded.

The U.N. says the Saudi-led coalition is responsible for roughly two-thirds of civilian deaths.

Jan. 21 marked the 300th day of the relentless bombing campaign.