Hell on Earth for Iraqis: 19,000 civilians killed in less than two years — roughly 28 per day 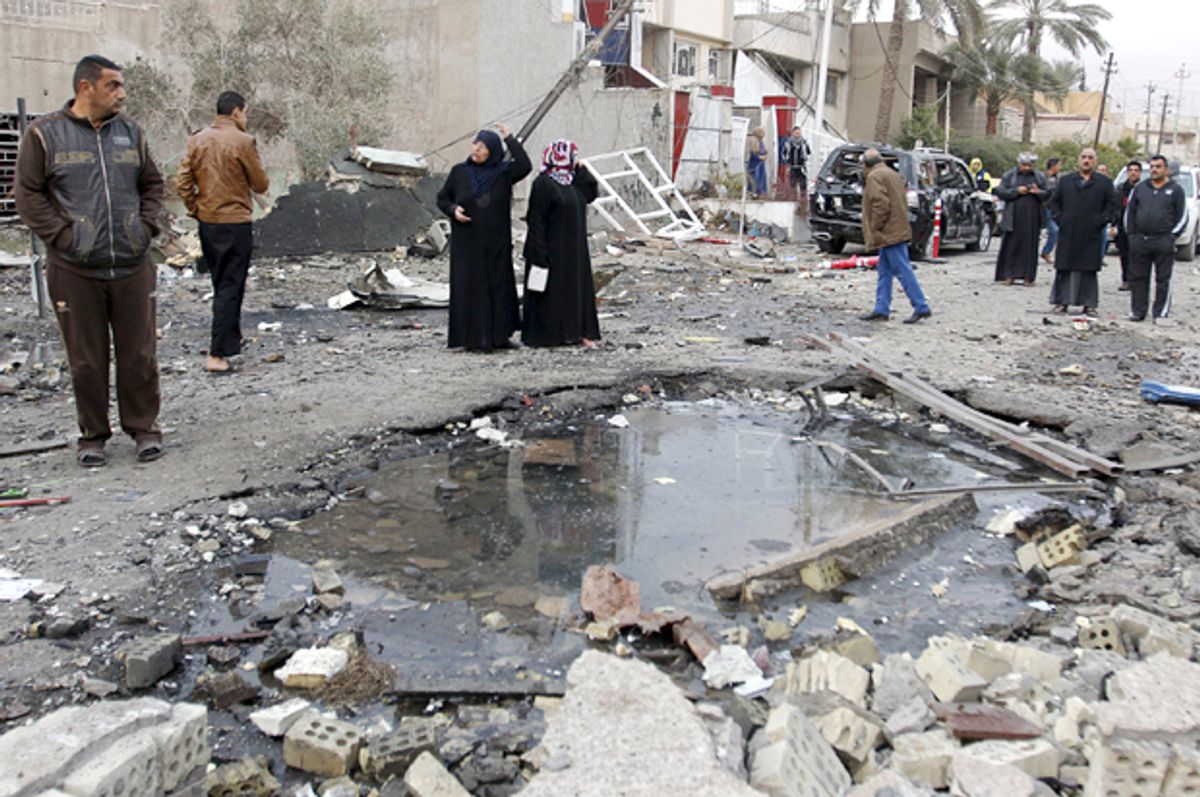 A new United Nations report paints a hellish picture of the violence that has overtaken Iraq in the wake of the U.S. war that destabilized the country.

Another 3,206,736 Iraqis were internally displaced, including more than 1 million school-age children, in the 21 months from January 2014 to September 2015.

The study emphasizes that these are conservative estimates, and "the actual number of civilian causalities could be much higher than recorded." Moreover, the U.N. indicates that the number of civilians who have died from secondary effects of the violence, such as lack of access to food, water or medical care, is unknown.

This continued violence succeeds the almost nine-year U.S. military occupation of Iraq, following a 2003 invasion the U.N. explicitly declared to be illegal. The U.S.-led war destroyed the Iraqi government, set off a sectarian conflict and spread violent extremism throughout the country and the region as a whole.

Former British Prime Minister Tony Blair, who supported the illegal war, has admitted that it was a primary factor in fueling the rise of  ISIS, which the U.N. report says is carrying out crimes against humanity and likely even genocide.

In the Iraq War, from March 2003 to December 2011, more than 1 million people were killed — "a conservative estimate," according to a study by the Nobel Prize-winning organization the International Physicians for the Prevention of Nuclear War.

"Armed violence continues to take an obscene toll on Iraqi civilians and their communities," remarked Zeid Ra'ad Al Hussein, the U.N. high commissioner for human rights, in the new report on the latest human tolls of the violence.

The U.N. study indicates that violence against civilians is coming from all sides, although ISIS is, of course, responsible for by far the most egregious crimes.

"The so-called 'Islamic State of Iraq and the Levant' continues to commit systematic and widespread violence and abuses of international human rights law and humanitarian law," the report says. "These acts may, in some instances, amount to war crimes, crimes against humanity and possibly genocide."

It notes that, in addition to mass murder of civilians, ISIS' self-appointed courts have also imposed punishments such as stoning and amputations.

ISIS is targeting non-Sunni ethnic and religious communities, "systematically persecuting" them, subjecting them to violent repression and crimes, the U.N. notes.

Women and children are particularly affected by these atrocities. Women face extreme sexual violence and even sexual slavery. Children are being forcibly recruited to be used as fighters.

The U.N. says it has received reports that ISIS is using chemical weapons.

Sites of religious and cultural significance are also being destroyed by ISIS, along with homes and other civilian areas.

"Despite their steady losses to pro-government forces, the scourge of ISIL continues to kill, maim and displace Iraqi civilians in the thousands and to cause untold suffering," noted Ján Kubiš, special representative of the U.N. secretary-general in Iraq.

These atrocities have created a wave of millions of refugees and internally displaced persons. "Civilians continue to flee their homes and communities in massive numbers," the U.N. reports.

Many Iraqi refugees has sought asylum in the West, but have been largely unwelcomed. In a time of heightened Islamophobia and racism, some European countries and many right-wing American politicians -- including more than half of the U.S.'s governors -- have made it clear they do not want to accept Muslim refugees, to harsh condemnation from rights groups.

Although ISIS is responsible for the bulk of the suffering, the U.N. notes there have also been reports of civilians killed and kidnapped and civilian infrastructure destroyed by pro-government forces, militias and tribal fighters.

Moreover, the report indicates that there have been continuous reports of civilians killed in U.S.-led airstrikes. Hundreds of civilians have been killed in the U.S.-led bombing of ISIS in Syria and Iraq, according to the watchdog group Airwars.

A French journalist formerly held captive by ISIS has argued these civilian casualties have only strengthened ISIS, making the Western bombing campaign ineffective. The journalist's warnings are corroborated by U.S. intelligence agencies, which have admitted that, despite spending billions of tax dollars on a year of bombing, ISIS has not gotten significantly weaker.

"Serious concerns for the well-being of civilians, particularly the most vulnerable, persist," the U.N. warned in the report.

The Baghdad Province, the capital governorate of Iraq, is the most affected by this violence, according to the U.N.

The Report on the Protection of Civilians in the Armed Conflict in Iraq was compiled by the U.N. Assistance Mission for Iraq and the Office of the High Commissioner for Human Rights. It is based on testimony obtained directly from survivors and witnesses.

"Civilians continue to suffer the most from from the non-international armed conflict in Iraq," the U.N. says. "The violence suffered by civilians in Iraq remains staggering."