Luke Skywalker, Dumbledore and the problem with secretly-queer heroes: "As LGBT as you want them to be" isn't enough

Mark Hamill says the audience can decide Luke's sexuality—but that's a step back for LGBT visibility, not forward 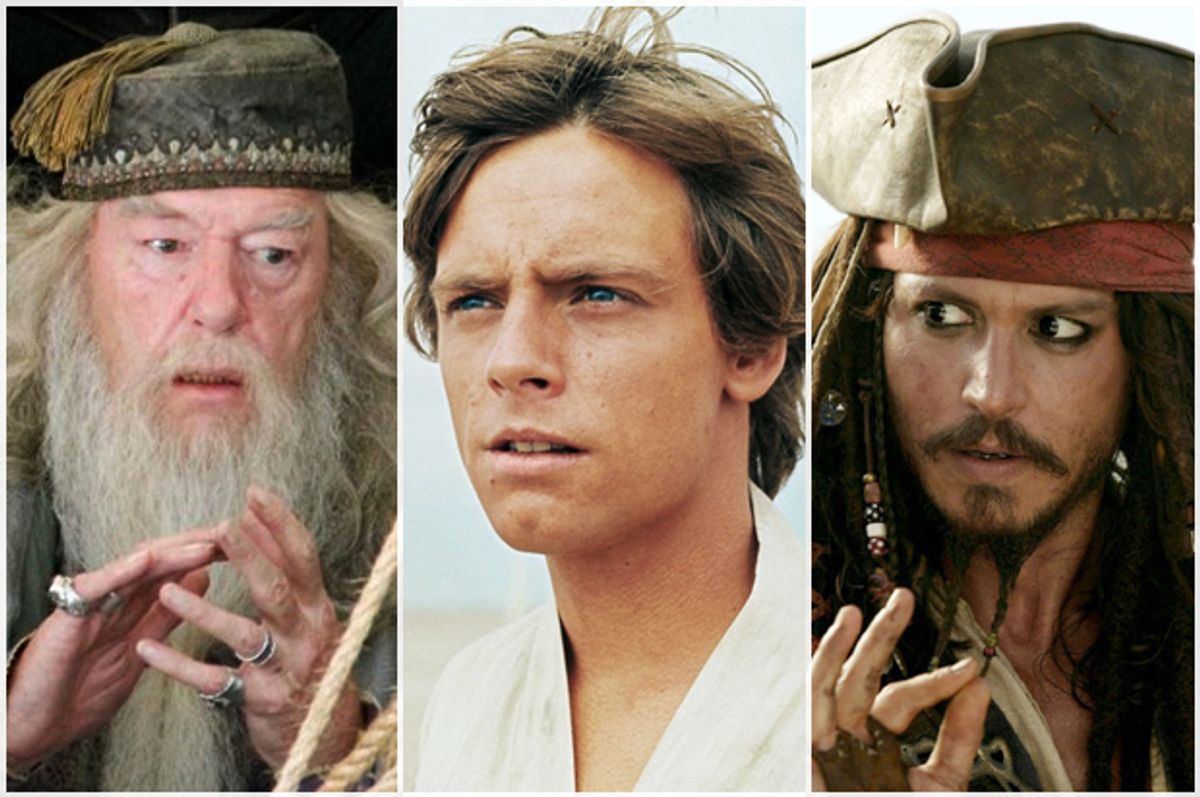 Could Luke Skywalker be bisexual? According to actor Mark Hamill, the character’s queerness is in the eye of the beholder. On Twitter, Hamill responded to a fan’s inquiry about Skywalker’s sexuality. “His sexuality is never addressed in the films,” the 64-year-old actor wrote. “Luke is whatever the audience wants him to be, so you can decide for yourself.”

This is far from the first time that someone has suggested the protagonist of the original “Star Wars” trilogy might not be straight. As Slate’s David Plotz wrote back in 2000, Luke Skywalker’s sexuality has been a staple of fan-fiction for decades, which even imagines a romance between the young Jedi and Han Solo. These interpretations show that, to a certain extent, Hamill has a point—characters like Luke Skywalker belong to the fans, who can shape them into their own fantasies for the character. This is especially true when Skywalker himself is presented as something of an Everyman, a character who offers a mirror in which viewers can see themselves reflected.

Hamill’s take has been warmly received on the Internet, and while I appreciate his openness to a queer reading of the character, I don’t think arguing Luke Skywalker can stand in for all identities and sexualities is as progressive as it sounds. In general, I have a huge problem with this gentle retconning of iconic characters—with stars and creators suggesting that they were either gay the whole time (à la “The Sixth Sense”) or that our faves are as LGBT as we want them to be. At its worst, this argument serves as a way to not do the real work of inclusion (e.g., creating characters that are overtly queer) by claiming your work was always diverse.

The most famous example of this is J.K. Rowling—who announced that Albus Dumbledore, the wise headmaster from the “Harry Potter” book series, was gay while promoting “Harry Potter and the Deathly Hallows.” According to Rowling, Dumbledore had fallen for a rival wizard, Gellert Grindelwald, although the romance wasn’t meant to be. But despite outing Dumbledore during her book tour, there was nary a mention of it in print. While fans had long speculated about his sexuality, you could read all six of the novels Dumbledore is featured in without even the faintest inkling that he’s anything but heterosexual.

That’s also the case with Johnny Depp, who told the Guardian last November that “all of his characters are gay.” In an earlier interview with U.K.’s Metro, the actor explained, “I’m very happy to explore all possibilities of a character and really, you know, dive into the role.” For starters, that statement raises a red flag because it’s empirically not true. In “Black Mass”—the movie Depp was promoting when he made those comments—he plays the Boston gangster Whitey Bulger, who was married to Lindsey Cyr for 12 years. His “Transcendence” character, Will Caster, is married to a woman (played by the luminous Rebecca Hall, no less). In “The Corpse Bride,” the fact that his stop-motion-animated character isn’t gay is even in the title.

You can argue that all of these characters are bisexual or queer or pansexual or anything you like, and that’s precisely the problem: By leaving it open to interpretation, we’re allowed to read them as anything we want. Sure, Johnny Depp might intend his characters in “The Rum Diary” and “Public Enemies” to be gay (given the fact that they’re Hunter S. Thompson and John Dillinger, that’s kind of dubious), but I could just as easily interpret them as straight. (I could also interpret them as a giant chicken wearing a human costume.) When your character’s sexuality has to be implied through vague subtext, it serves to make queer visibility all but invisible.

Thus, Depp’s Everyqueer argument doesn’t quite work. In The Mary Sue, Carolyn Cox (who praises Hamill’s remarks) writes: “If a character is straight, that’s almost always made explicit, but LGBTQ+ fans hoping to see themselves in media are asked to be happy with representation that isn’t even subtext. It’s one of the many double standards of heteronormativity.” Thus, television and film characters—from Jack Bauer (“24”) to Stringer Bell (“The Wire”)—are generally regarded as straight until proven homosexual.

There’s a reason for that: In media, straight white men are always treated as the automatic default. When Richard Linklater’s “Boyhood” debuted to deafening acclaim last year (it’s the only movie to score a perfect 100 on Metacritic), critics noted that its universality was part of its power, the fact that Mason’s white, middle-class upbringing is allowed to stand in for all of ours. “The profuse pleasures of Boyhood spring not from amazement but from recognition—from saying, Yes, that’s true, and that feels right, or that’s how it was for me, too,” wrote the New Yorker’s Anthony Lane. But if Mason were queer or even black—like the characters in the similarly themed “American Promise”—his story wouldn’t be allowed to speak for everyone.

That’s not just a matter of societal bias but studio will. Actors like Mark Hamill might be cool with a queer reading of Skywalker, but studios tend to be less cool about an actual LGBT character at the center of the story—representing the universal struggle. In 2013, “The Amazing Spider-Man” star Andrew Garfield asked why the titular webslinger couldn’t be bisexual: “What if MJ is a dude?” That’s a good question. The easy answer is that MJ could very well be, but Spider-Man creator Stan Lee won’t allow it. In a series of emails that leaked to Gawker last lear, Lee mandated that Spidey should always be “Caucasian and heterosexual.”

In the case of Spider-Man, the idea is that audiences can continue to project themselves onto the person inside that mask—but only as long as the screen stays “blank.” But the issue that these “blank slate” characters are anything but: The idea of the Straight White Everyman is underwritten with decades of excluding marginalized voices. These populations who are told—time and again—that it’s OK their stories aren’t actually represented on-screen because there’s someone to stand in for them. For every sympathetic actor like Garfield or Mark Hamill, there are dozens of film executives behind them working to maintain the hetero status quo.

Instead of allowing Straight White Everyman to represent LGBT voices, the “Star Wars” series shows why actually writing explicitly queer characters is so important. As Eli Keel argues for Salon, having a gay protagonist in the most famous film series in history might “save lives.” In response to widespread speculation that fighter pilot Poe Dameron (who appears in “The Force Awakens”) might be gay, Keel writes:

“LGBT+ representation in ‘Star Wars’ would be a huge victory for the continued fight for freedom and acceptance that still faces so many people. LGBT+ teens still have a much higher rate of suicide and depression. A gay character in the biggest franchise in the universe, one linked to so many childhoods and formative to what kids think of as right and wrong, wouldn’t quite be the same as blowing up a Death Star, but it would be close.”

Poe Dameron will prove an interesting test case for the “Star Wars” films—because the series has yet to actually confirm his sexual orientation. Thus far, all we have to go on are lip bites, suggestive glances and an ambiguous statement from Oscar Isaac (who plays Poe) on “Ellen.” Episodes VIII and IX could very well go the way of Luke Skywalker and insist that his blank slate sexuality belongs to everyone, but just once, I don’t want to have to share an Everyman protagonist or make do with a retconned gay wizard. I want a character that’s explicitly written with my community in mind and writers who have the courage to integrate it into the story line—not dump the news during a press conference.

If Poe Dameron turns out not to be gay, do me a favor, Oscar Isaac: Don’t tell me “Star Wars” didn’t address it. We address that question every single time we don’t allow our characters to utter the two simple words that queer audiences have been waiting for generations to hear.