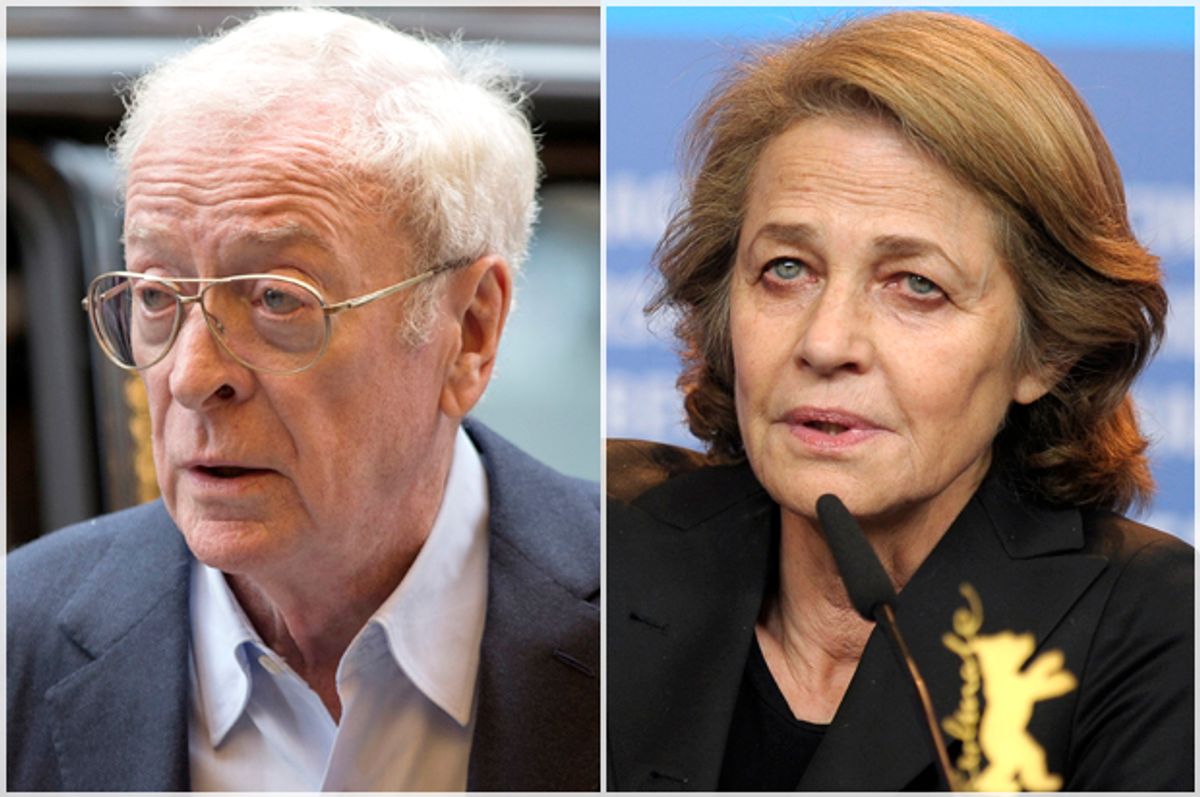 Well, that was painful. Two of the very best British actors have shown themselves to be out of step -- at the very least -- with what’s gong on around the Oscar diversity scandal. It’s tempting to shout at them, especially on the Internet, but the best retort is: Guys, please think about this a bit before you opine on it. Ask some questions. Try to figure out why actors of color are so frustrated. Then, either come up with something smart to say, or just defer and hold your tongue for a little while. Sometimes it’s better to listen to what other people are talking about.

What’s especially frustrating is that these are two actors who have – at least as professionals – adapted to changing times. As actors, they’re not stuck in the Swinging ‘60s. Politically, though, they don’t seem to be paying a lot of attention.

The Guardian has the most explosive comment, from Charlotte Rampling, the star of “The Night Porter” and 2015’s Oscar-nominated “45 Years.”

Asked for her take on the current furore over all-white lists of nominees on French Radio network Europe 1 on Friday morning, the British actor did not mince her words. “It is racist to whites,” she said.

“One can never really know, but perhaps the black actors did not deserve to make the final list,” added Rampling. Asked if the Academy of Motion Picture Arts and Sciences should introduce quotas, a proposal which no current advocate of increased diversity has mooted, she responded: “Why classify people? These days everyone is more or less accepted ... People will always say: ‘Him, he’s less handsome’; ‘Him, he’s too black’; ‘He is too white’ ... someone will always be saying ‘You are too’ [this or that] ... But do we have to take from this that there should be lots of minorities everywhere?”

The “everyone is more or less accepted” line is almost as bad as the “racist to whites” bit. Sure, in  professional acting circles, overt racism is probably hard to find. But that doesn’t mean that actors of color (okay, that term sounds bureaucratic but there’s no better one) don’t face special difficulties. Young aspiring actors of color are more likely to come from neighborhoods with public schools that have cut arts education, and less likely to be able to rely on a network of family and school friends already in the business. Professionals still face incredible barriers inside the film industry over the kinds of roles they are offered, or even allowed to audition for. Not to mention everyday racism — when you try to hail a cab and fail, being respected by your peers doesn't help.

No one expects Caine or Ramping to have all the answers to this: It’s perfectly reasonable to be uncomfortable and confused, as a lot of people are over the recent uproar. What does the Academy do, exactly, when its voters don’t nominate black, Latino, and Asian actors? What is the right balance of artistry and social progress? Will changing the number of nominees make a difference? How hard does the Academy need to work to recruit nonwhite actors?

There are no clear solutions on the issue right now. Some want to boycott, some think it’s best not to. Some want Chris Rock to resign in protest, some think he needs to stalk the stage and breathe fire. At this point, there is no consensus.

But to deny the problem, as Rampling is doing, is a bit weird, and to call it racist against whites is extreme: You can’t invert a power structure by just having a conversation, however high-pitched. Don’t white people run most of the studios, the theaters, and the other institutions that actors rely on?

The other British actor who’s put his foot in his mouth lately is Michael Caine, who made his name with “Alfie” and “Get Carter” and maintained his currency through the Austin Powers and Batman films as well as Christopher Nolan’s “Interstellar.” The Independent reports:

The double Academy Award-winner offered the advice to black actors to “be patient”. He added: “Of course it will come. It took me years to get an Oscar, years.”

Actors, let’s remember, are trained at playing people different from themselves. When we see a great performance, we want to like and trust the person giving it. We tend to think they’re brave, wise, perceptive, and everything else we value. But just as T.S. Eliot could be a great poet and a dedicated ant-semite, an actor can be accomplished in front of the camera and politically naïve or selfish or whatever the rest of the time. (If you’ve known an actor, this is not news to you.)

As for Caine and Ramping, there will surely be calls for their heads over the next few days, and that’s not fair either. Rampling is close to 70 and Caine in his 80s. They were raised in a different reality. How different are they than most other members of their generation? (April Reign, who started the #OscarsSoWhite movement, has called Caine’s comments “disappointing,” which will be one of the milder reactions.) We’ll all be out of step with something if we live long enough. Then again, the average age of Academy voters, who are also overwhelmingly white and male, is 63 — and calls to revamp Academy membership reflect an awareness of what those statistics can mean.

But the next time a mic is waved in their face, the best thing to do is to say that – like a lot of people – they are still struggling to figure out the problem and how to solve it. To say that actors of color need to wait their turn is clueless and to say that the current controversy is “racist to whites” is a line that Rampling, let’s hope, regretted soon after she uttered it.