Own it, conservatives: Palin and Trump are the faces of the GOP — and despite its outrage, the right must accept it

The GOP love affair with Palin paved the way for Trump, who's a product of right-wing media's cult of personality 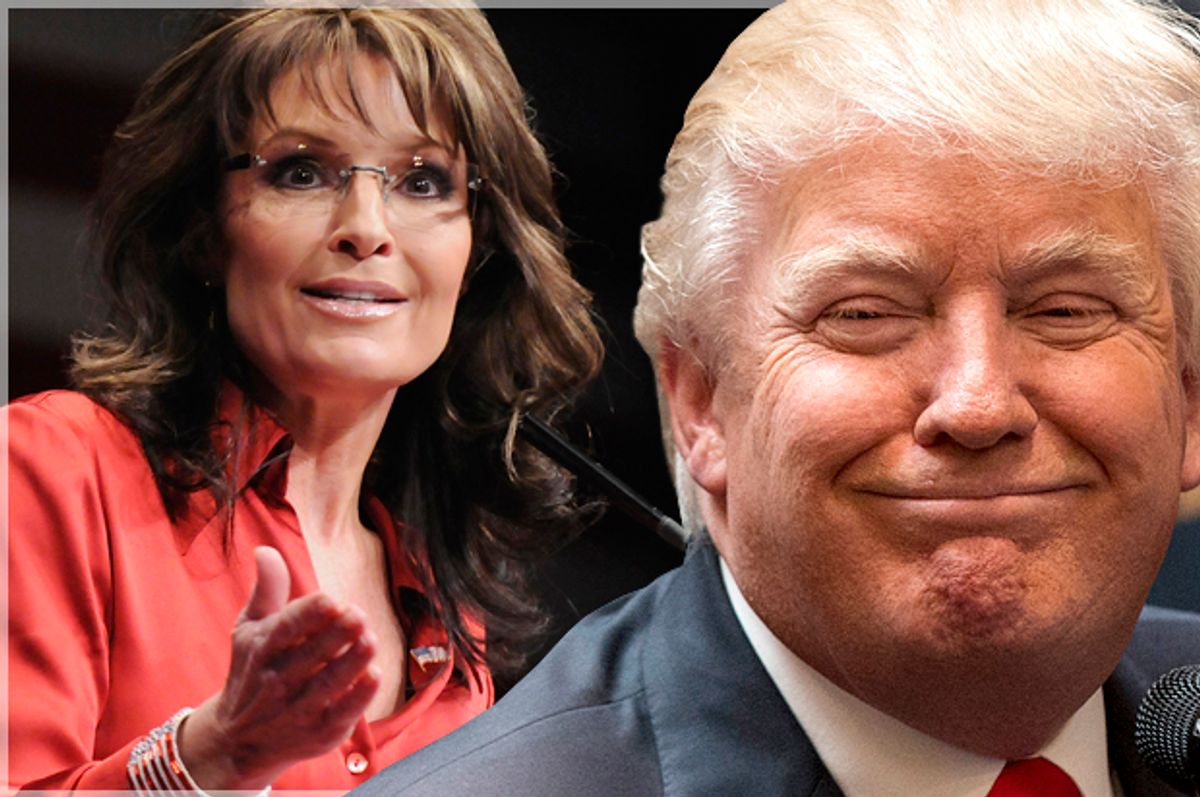 Since Sarah Palin delivered her bloated, mostly incoherent speech in support of Donald Trump, conservative commentators have united in protest. Bill Kristol tweeted: “OMG. Palin has gone rogue.” Meghan McCain, whose father is responsible for Palin's celebrity, said “This is not my style of politics, using sort of vulgar language.” Greg Gutfeld, the Fox News pundit, accused Palin of “abandoning” her faith in the name of political opportunism. The National Review's Charles Cooke wrote that Palin's endorsement “is no accident of ideology or timing; rather, it is the inevitable and rational confluence of two ghostly cults of personality – a fat-cutting, cash-saving merger that will serve to increase overall market share.” Glenn Beck lambasted Palin for discarding her conservative principles. Even the right-wing blog RedState.com dismissed Palin as a know-nothing hack.

There's nothing objectionable about these observations. Palin is a buffoon and a blight on our process. But even by her low standards, this endorsement speech was something to behold. Here a just a few of the highlights:

“And he, who would negotiate deals, kind of with the skills of a community organizer maybe organizing a neighborhood ta, well, he deciding that, 'No, America would apologize as part of the deal,' as the enemy sends a message to the rest of the world that they capture and we kowtow, and we apologize, and then, we bend over and say, 'Thank you, enemy.'”

“He's got the guts to wear the issues that need to be spoken about and debate on his sleeve, where the rest of some of these establishment candidates, they just wanted to duck and hide. They didn't want to talk about these issues until he brought 'em up. In fact, they've been wearing a, this, political correctness kind of like a suicide vest.”

“How about the rest of us? Right-winging, bitter-clinging, proud clingers of our guns, our God, and our religion, and our Constitution.”

And on and on and on. This is the rambling idiot Sarah Palin has been since she stepped foot on the national stage, and no one should be surprised by any of it.

The problem with all this conservative outrage, though, is that many of these same commentators were gushing over Palin in 2008, even though it was clear then that she was a bumbling incompetent. No thinking person who listened to Sarah Palin thought she was fit for office. And yet the Republican Party and conservative media hopped aboard the Palin train, insisting she was a budding “rock star” with a bright political future. Indeed, in 2007 the conservative commentariat was introduced to Palin on an Alaska cruise, and the consensus was that she was a rock star. Many of the heavy-hitters in attendance, people like Bill Kristol and Fred Barnes, walked away from that cruise with a pro-Palin agenda. Jane Mayer explained it well in her 2008 New Yorker piece:

“'By the time the Weekly Standard pundits returned to the cruise ship,' Paulette Simpson said, 'they were very enamored of her.' In July, 2007, Barnes wrote the first major national article spotlighting Palin, titled 'The Most Popular Governor,' for the Weekly Standard...It got the ball rolling. The other journalists who met Palin offered similarly effusive praise: Michael Gerson called her a 'mix between Annie Oakley and Joan of Arc.” The most ardent promoter, however, was Kristol, and his enthusiasm became the talk of Alaska's political circles...Indeed, as early as June 29th, two months before McCain chose her, Kristol predicted on 'Fox News Sunday' that 'McCain's going to put Sarah Palin...on the ticket.” He described her as 'fantastic,' saying that she could go one-on-one against Obama in basketball, and possibly siphon off Hillary Clinton's supporters.”

The irony of right-wing pundits lamenting Palin's huckterism is impossible to miss. Palin only exists because they propped her up, and because of John McCain's bottomless cynicism. And no one in the party or the punditocracy has really owned this. Nominating Sarah Palin to be Vice President now feels like a turning point, both for the country and for the Republican Party. It was the culmination of a conservative politics fueled by Fox News and talk radio. Palin's nomination and - the Tea Party movement that followed - really prepared the way for Donald Trump. And despite all their hand-wringing, Sarah Palin is the child of right-wing media, and Donald Trump is now the face of the party.

The polls prove it.