The GOP establishment hates Cruz so much it would rather deal with Donald Trump. There's a reason for that 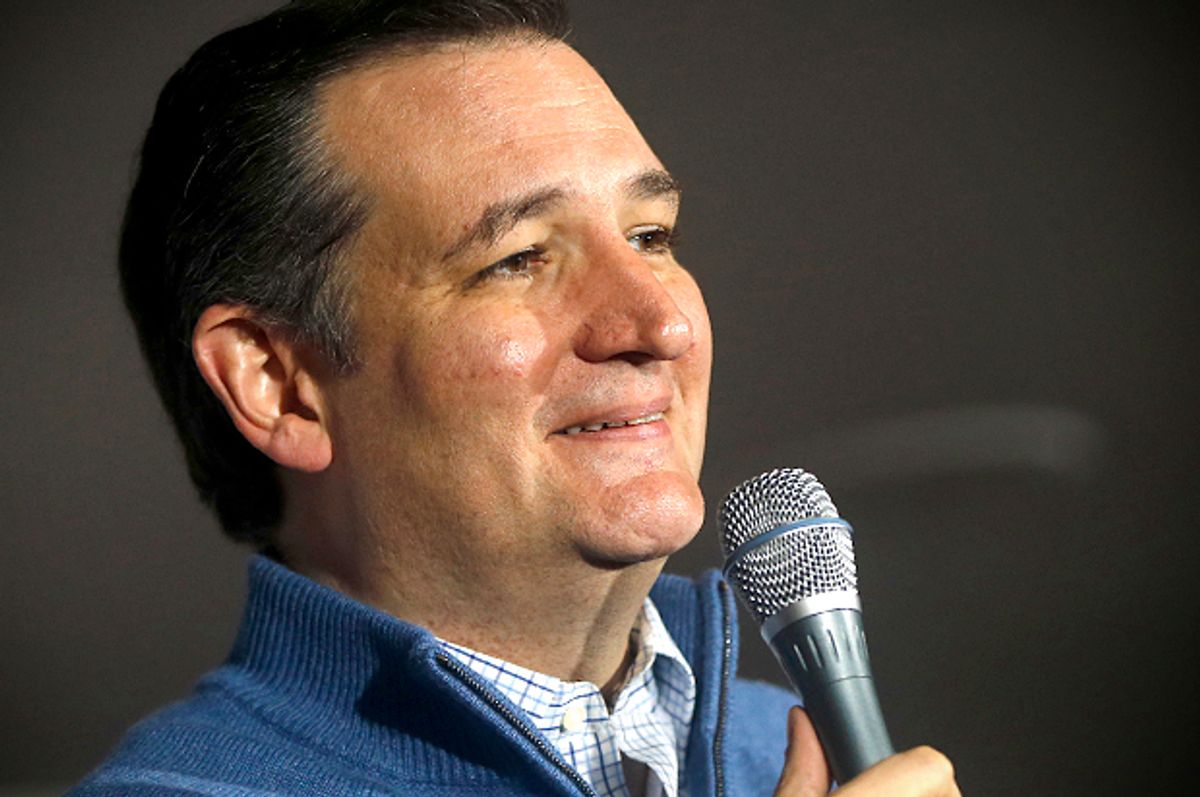 Maybe progressives should root for Ted Cruz to be the Republican nominee.

Over at the Huffington Post, Ryan Grim and Sam Stein have a deep look at why the Republican establishment is lining up behind Donald Trump over Cruz in what is becoming a two-man race for the nomination. Of all the reasons mentioned, though, one tell is an anonymous quote that comes from a person described as “somebody in the GOP establishment,” who tells the writers,

“I'm rooting for Hillary…She can't win a mandate, so we hold the House and don't get slaughtered in the Senate. We will have a great midterm in 2018 running against her," he said, requesting anonymity for obvious reasons. "We are a great opposition party."

If you define an opposition party as Republicans have for the last eight years, as one that spends all its time screaming “No” at every proposal from Democratic legislators and the White House, and doesn’t worry itself too much with the mechanics of governing until there is a hard deadline that might blow up the world’s economy, then the GOP is in fact wonderful at its role. In fact, every major crisis, near-crisis, or near-catastrophe of the last few years – the government shutdown in the fall of 2013, the downgrading of the nation’s credit rating in 2011 – has occurred because Republicans in Congress were stamping their feet and refusing to cooperate with the Kenyan Usurper in the Oval Office.

All of that will continue under the next Democratic president. But we can at least have some fun to dull the frustration and rage. Which is why, for comedy purposes, I’m rooting for the senator from Texas to grab the nomination.

As has been clear for some time, the GOP establishment hates Cruz. Sure, many of them also hate Donald Trump – witness the pathetic and impotent efforts of various super PACs and Republican operatives to destroy his campaign, an effort that has driven a few of them to lose what was left of their minds – but they loathe Cruz with the fiery intensity of a thousand white-hot supernovas. The fact that they see (or at least have resigned themselves to) a fast-talking, vulgar racist xenophobe with not-particularly-conservative principles as a viable person to represent the United States on the world stage is both pitiful and the one-sentence summary of a potentially hilarious movie satire.

There is also apparently a belief among the establishment that they could work with Trump, that deep down much of his shtick is just that, an act to fool the rubes who vote for Republican candidates -- that in a general election and then in office, Trump would need the help of seasoned GOP members and operatives to set up his administration. Trump, they believe, is a man whom they could “do business with.”

In short, he is crazy but not stupid, the thinking goes. Whereas Ted Cruz might legitimately be a sociopath.

So this is partly an act of self-preservation for the GOP. More specifically, it is an act of self-preservation for the thousands of career Republicans who believe they would have a place in a Trump administration but would be frozen out by President Cruz out of spite. A Cruz nomination would bring full-on career panic to people who make entirely too much money being professional assholes. And that would be hilarious.

Need another reason? Some Republicans, notably former senator Bob Dole, argue that Cruz at the top of the ticket would be so toxic for down-ballot GOP candidates that many would lose their elections at both the state and federal level. Making life harder for Republicans running for re-election should be something all progressives can get behind.

So should Cruz win the nomination, how hard would the GOP work to help him the election? That’s a good question. Is it possible that Republicans hate him enough that many would not lift a finger to help him achieve his lifelong dream, even if it means handing the White House to a Democrat for another four or even eight years? Again, from Stein and Grim:

Among some seasoned Republicans, the animus towards Cruz is so strong that a schadenfreudian hope has begun to emerge. In a contest against Trump, the thinking goes, it might be best for Cruz to win the nomination, only to suffer a lopsided general election defeat, proving once and for all the true limits of his appeal.

This lopsided election defeat might help Democrats make some gains in the House and retake the Senate. And Senate Republicans would still be saddled with Cruz in their caucus for another two years. Or more, if he wins re-election in 2018. Who says no to that?

Sure, the thought of either Trump or Cruz being anywhere near the Oval Office for anything beyond a photo op should terrify sane humans everywhere. And a Cruz loss in the general means that conservatives can spend four more years deluding themselves that the problem was with their candidate, not their ideology. Which will only help the re-election efforts of President Clinton or President Sanders but still push off the GOP becoming a sane opposition party sometime before, oh, say, the sun goes supernova and reduces the planet to a fiery cinder.

But it’s pretty clear that Cruz’s winning the presidential nomination would, in the short term, cause a great deal of pain and chaos in the Republican Party. And with four more years of an opposition party trying to block every function of government under a Democratic president staring us in the face, with gridlock certain to stymie and frustrate every effort at passing any needed legislation at all well into the future, we’ll need to take our entertainment and our joy wherever we can find it.