Published in January 1966, the book launched half a century—and counting—of American obsession with real murders 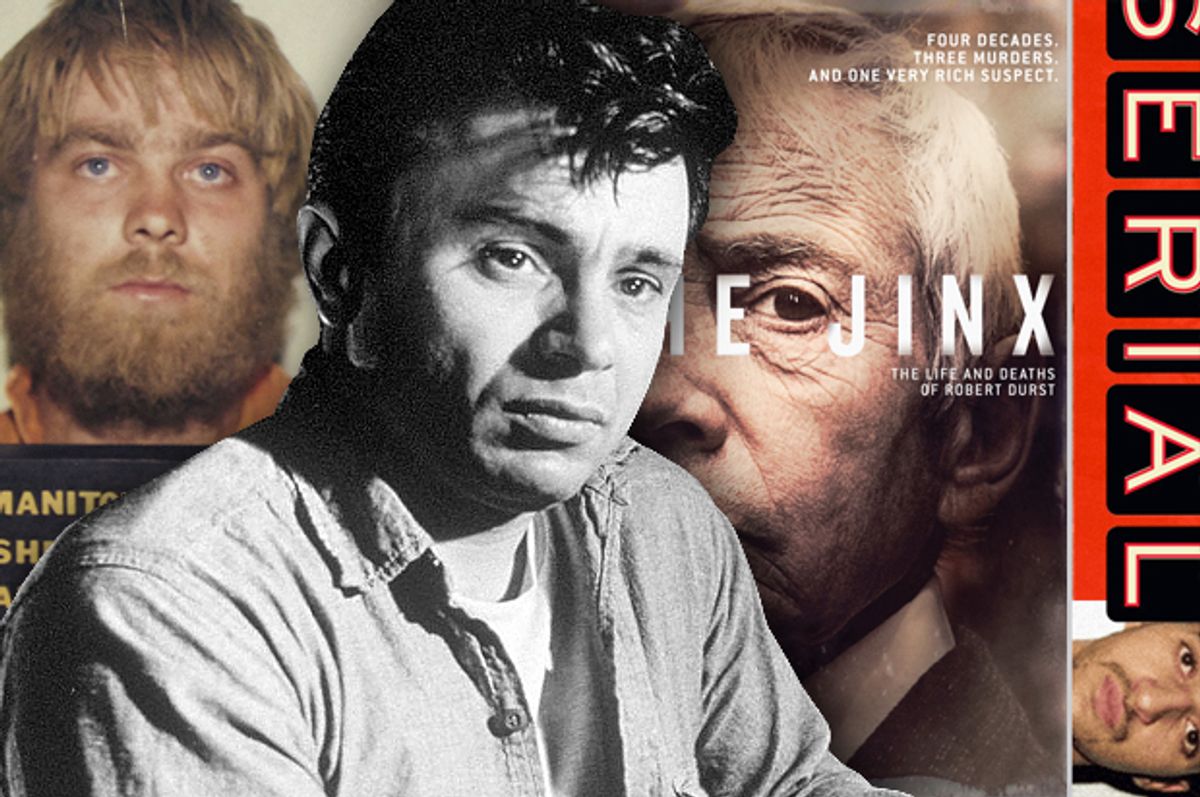 Robert Blake in "In Cold Blood"
--

What is the most famous crime in U.S. history?

Was it the assassination of Lincoln? JFK? Martin Luther King, Jr.?

Was it the Manson Family murders? The O.J. trial?

Was it the Pearl Harbor attack or the events of 9/11 – crimes so big and world-changing that we forget to call them “crimes”?

But there can be little debate about our most famous crime story. Its inspiration was a 291-word New York Times article headlined “Wealthy Farmer, 3 of Family Slain.” Its writer: Truman Capote, the dazzlingly talented, distinctly high-voiced, five-foot-three-inch author of "Breakfast at Tiffany’s."

The finished product – full title: “In Cold Blood: A True Account of a Multiple Murder and Its Consequences” – was published in four installments in the New Yorker in the fall of 1965, and then released as a book in January 1966. Its first sentence sits near “Call me Ishmael” among American literature’s most famous opening lines: “The village of Holcomb stands on the high wheat plains of western Kansas, a lonesome area that other Kansans call ‘out there.’”

Indeed, the entire story – which offers access to every conceivable aspect of the quadruple homicide, right down to the “the hysterical inhalations of a man with a severed windpipe,” during the massacre – occupies a near-mythical place in American culture. “Everything he had set out to do Truman succeeded in doing,” wrote Gerald Clark in his 1988 Capote biography. “On a superficial level, 'In Cold Blood' is a murder story of riveting vitality and suspense. On a deeper level, it is what he had always known it could be, a Big Work – a masterpiece, in fact, that he has infused with the somber energy of a Greek tragedy.”

The story was an overwhelming success. The four New Yorker installments propelled the magazine to record newsstand sales. And when the book was released, Capote “was the subject of twelve articles in national magazines, two half-hour television programs, and an unparalleled number of radio shows and television stories,” writes Clarke. In the article “A Book in a New Form Earns $2-Million for Truman Capote,” the New York Times estimated that the author stood to make 14 dollars and 80 cents per word. Across the Atlantic, the Guardian wrote: “Whatever its merits, 'In Cold Blood' is already more than a book: it is a happening.”

And it still is.

American audiences never seem to tire of Dick Hickock, Perry Smith, and their impossibly All-American victims, the Clutters. The book was adapted for the big screen in 1967, and has since been the basis for a TV mini-series (in 1996), and two near-simultaneously released Capote biopics, "Capote" and "Infamous" (2005 and 2006, respectively). Last year, Variety reported “The Weinstein Company has optioned television rights to Truman Capote’s ‘In Cold Blood’ with plans to make a TV event series.” And if all of that isn’t enough, we’ve got a graphic novel about Capote’s reporting trips to Kansas, and a book about the “party of the century” he threw at the Plaza Hotel in New York to celebrate the book’s success.

So what else is there to say at this point, as the book turns 50?

A lot, it turns out. I recently spoke with three experts who offered their insights.

Harold Schechter, editor of the Library of America's "True Crime: An American Anthology":

"In Cold Blood" is really a landmark book in the development of American true crime writing. Up until the publication of "In Cold Blood," true crime was basically perceived as – and, to a large extent, was – kind of a disreputable, sub-literary genre, very much associated with this history of pulp magazines and cheap paperbacks. Capote really elevated the genre into this very serious literary form.

It’s one of the, if not the most, culturally influential books of the 20th century. Everything is now true crime. There are whole cable channels devoted to it. This is in no way a form of bragging or anything, but I’m contacted, almost on a weekly basis, by the Discovery Channel, or this channel, or that channel to be a talking head in something they’re producing. It’s become such a dominant, dominant form of popular entertainment now.

Ralph F. Voss, author of "Truman Capote and the Legacy of 'In Cold Blood'":

Truman Capote, himself, was probably one of the most conspicuous literary figures in 20th-century American literary history. He was a celebrity in ways that Hemingway was a celebrity, although not in any way similar. Capote, through a remarkable talent for self-promotion as much as anything else, and his sort of over-the-top flamboyance – he just drew attention to himself. People remember Truman Capote and remember his appearances on late-night television [as] a funny little man who would say outrageous things, and who actually became famous for being famous.

It just astonishes me that, here we are, 50 years after the publication of it, and it still has legs. People still read this. It’s still in print. People are really interested in this story and [at a basic level] it’s a crime story about a really stupid and senseless botched robbery, in which the perpetrators were not very bright and got caught by very methodical, sort of gumshoe detective work.

I’m still trying to understand it, and to really comprehend how good it is, and how he could have written such a thing of beauty. And it still has an impact on me. I remember just being floored by the strength of the prose and my inability to put it down. It was one of the very first books that grabbed me in that way.

What comes to mind [today] is the fact that it’s still so fresh. It’s still so salient and poignant, and, honestly, I don’t think a lot has changed. If it were published today, I think it would still pack the same punch. Because there’s something that is so shocking and startling and upsetting about the idea that you could be sleeping in your bed at night and someone could break in and murder you with a shotgun. That still startles and that still upsets.

Everybody knows at the outset what happened, how it happened, why it happened, and what happens to the killers at the end. Capote’s job was to figure out how to keep people reading a story that they already know, front to back. And he was able to do that and was a genius for it. And true crime writers have been copying him, to a greater or lesser extent, ever since.

And, still, there’s more to say.

One must note, for example, that on the other side of the book’s success awaited a spectacular downfall for its author. The 2005 film "Capote" ends with a few stark sentences: “'In Cold Blood' made Truman Capote the most famous writer in America. He never finished another book... He died in 1984 of complications due to alcoholism.” And a Telegraph essay by Clarke, the biographer, brings that bleak picture into sharper focus. Excerpt: “'No one will ever know what 'In Cold Blood' took out of me,' he told me. 'It scraped me right down to the marrow of my bones. It nearly killed me. I think, in a way, it did kill me.’”

And then there’s the fact that we find ourselves, a half-century later, in the midst of a mini true crime renaissance. In the last 18 months, stories like "Serial," "The Jinx," "Making a Murderer," have reminded us that, in the right storyteller’s hands, years-old crimes can still leave audiences spellbound. Would we have ever seen and heard these tales without Capote’s book? Unlikely. And it’s hard not to see homage in things like episode 5 of "Making a Murderer," “The Last Person to See Teresa Alive,” when Part 1 of "In Cold Blood" was called “The Last to See Them Alive.”

Of course, those recent true crime stories spring from a more complicated cultural moment than the mid-1960s. As a recent Times op-ed put it: “Out with the old tropes about truth-seeking investigators and tidy resolutions; in with the disquieting, dysfunctional reality of many courtrooms and police stations.”

These days, true crime stories are animated by one of the few things scarier than random homicide: an entire justice system gone haywire. At the end of the twelfth episode of "Serial’s" debut season, the host/reporter Sarah Koenig doesn’t have many answers – only more questions. “You, me, the State of Maryland – based on the information we have before us, I don’t believe any of us can say what really happened to Hae [the victim of the story’s central murder]” she says. “As a juror, I vote to acquit Adnan Syed... as much as I want to be sure, I’m not.”

Perhaps it was inevitable, then, in our moment of skepticism and doubt, that Capote’s book would be sent back to the lab for DNA testing, so to speak. Read through one of the many recent articles unraveling his claim that the book was “immaculately factual” – from Slate, the Wall Street Journal, Reuters and even the New Yorker itself – and it’s hard not to admit that the book needs an asterisk when it appears on lists like NYU’s “Top 100 Works of Journalism in the United States in the 20th Century.”

Which isn’t to say the book should be dismissed. Even if it floats in a kind of semi-fictional, semi-factual journalistic No Man’s Land, few books offer such a searing glimpse at America’s split personality. As Clarke describes it: “Going about its peaceful pursuits in Holcomb is one America—prosperous, secure, and a little smug… Speeding across the plains is the other America—poor, rootless, misbegotten… Together, victims and killers are America in microcosm—light and dark, goodness and evil.”

But, of course, biographers aren’t the reason we read "In Cold Blood." It’s the book itself. And, 50 years on, Capote still can’t be out-written. Listen to the sounds of his sentences when you read them aloud: "The handcuffed men, white-faced and blinking blindly, glistened in the glare of flashbulbs and floodlights. The cameramen, pursuing the prisoners and the police into the courthouse and up three flights of stairs, photographed the door of the county jail slamming shut." There’s writing like this on every page.

And it never ages. The year 1966 recedes further and further in our rear-view mirror, but Capote’s characters never do. Herb Clutter is still the healthy, proud, self-made farmer with a farm Capote compares to the Garden of Eden. His daughter, Nancy, is still the straight-A, class-president, champion pie-baker who scribbles about the day’s events in her diary. And the feeling of doom when Dick and Perry roll toward them – destined to find less than 50 dollars, instead of a cash-filled safe; destined to execute the house’s inhabitants anyway – only sharpens with time.

“The headlights disclosed a lane of Chinese elms; bundles of wind-blown thistle scurried across it,” Capote writes. “Dick doused the headlights, slowed down, and stopped until his eyes were adjusted to the moon-illuminated night. Presently, the car crept forward.”