Far from threatening U.S. security, these measures would save taxpayers billions and make the world a safer place 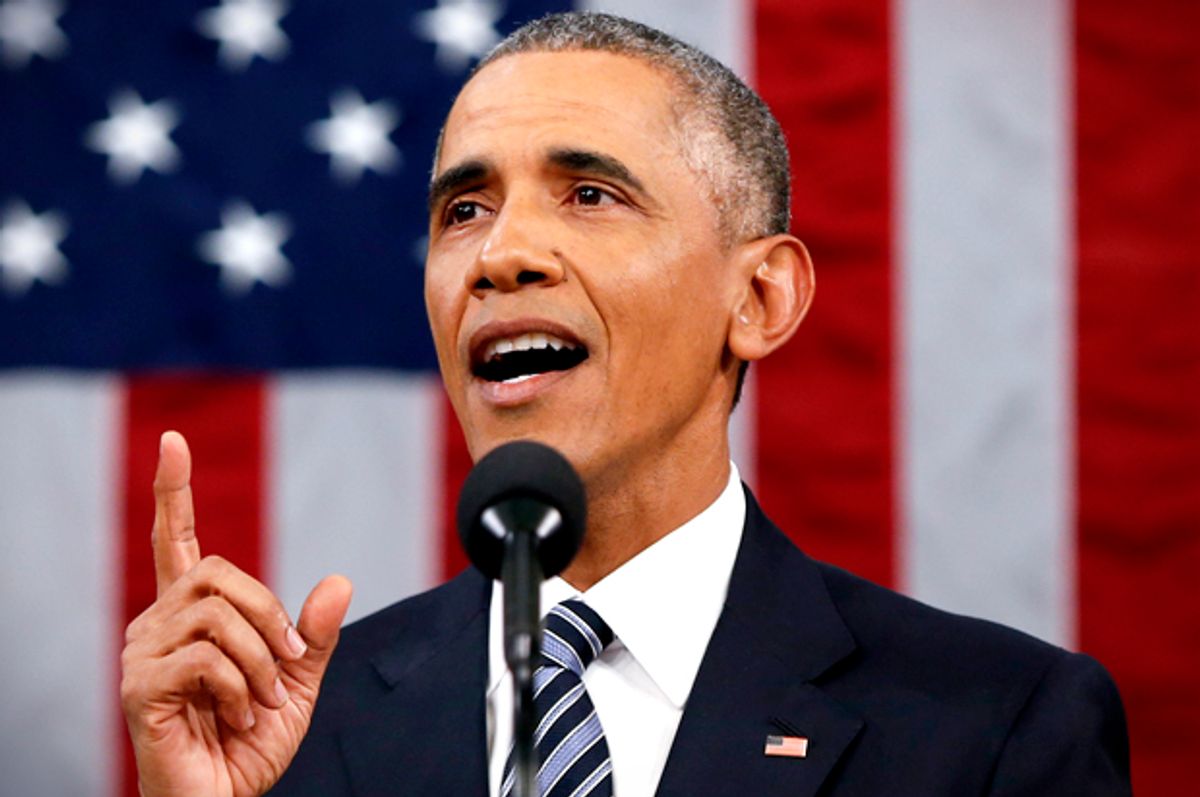 President Obama made a wise decision to avoid reciting a laundry list of new initiatives in his State of the Union address. After all, Congress will be in session only 111 days this year, the Republicans control both houses and he’s a lame duck. So how much can he get done?

That said, there are a number of things the president can still do to strengthen international security that would not require him to go through Congress. And taking such executive action would not be out of the ordinary. Indeed, Obama’s Republican predecessors, George H.W. Bush and George W. Bush, both made significant unilateral cuts in the U.S. nuclear arsenal.

According to Stephen Young, a senior analyst at the Union of Concerned Scientists (UCS), Obama could take four related actions regarding U.S. nuclear policy.

First, he could declare that the United States will take its land-based nuclear missiles off hair-trigger alert, abandoning a dangerous, outdated Cold War policy that increases the possibility of an accidental nuclear launch.

Second, he could cancel a proposed new nuclear-armed cruise missile that would likely lower the threshold for using nuclear weapons.

Third, he could cut U.S. deployed strategic nuclear warheads by a third.

And fourth, he could declare that the sole purpose of U.S. nuclear weapons is to deter a nuclear attack on the United States and its allies, which would fulfill his promise to reduce the role such weapons play in U.S. policy.

None of these steps would compromise U.S. security. On the contrary, they would not only save U.S. taxpayers hundreds of billions of dollars, they would also make the United States, and the rest of the world, a much safer place.

President Obama actually addressed the nuclear issue right out of the starting gate. Just a few months after taking office, he gave a widely acclaimedspeech in Prague on reducing the threat posed by nuclear weapons. "The existence of thousands of nuclear weapons is the most dangerous legacy of the Cold War," he said. "And as the only nuclear power to have used a nuclear weapon, the United States has a moral responsibility to act. We cannot succeed in this endeavor alone, but we can lead it, we can start it." He then cited some of the "concrete steps" the United States would take "toward a world without nuclear weapons."

A year later, in April 2010, he was back in Prague to follow through with one of his promised concrete steps: to sign the New Strategic Arms Reduction Treaty (New START) with Russia, further cutting both countries arsenals and reinstituting a strict verification system that the Bush administration had allowed to lapse. But since then, Obama has not been able to accomplish much else, despite his high hopes. In fact, it seems that his administration is going in the wrong direction. As I reported last August, it wants the U.S. government to spend $1 trillion over the next three decades on a new generation of nuclear warheads, bombers, submarines and intercontinental ballistic missiles (ICBMs).

Since the early days of the Cold War, the United States has been keeping its land-based ICBMs in a state of readiness that allows them to be launched within minutes, at least in part to avoid having them destroyed by a surprise nuclear attack. At this point, however, it is highly unlikely Russia would launch a massive first strike, and no other country is capable of doing so. What's more likely is an accidental, erroneous or unauthorized ICBM launch in response to a false attack warning, triggered either by a technical glitch or a human error. In fact, there have been a number of incidents of both kinds in Russia and the United States over the last few decades that could have prompted a nuclear launch.

Obama acknowledged the risks posed by this outmoded policy even before he moved into the White House. "Keeping nuclear weapons ready to launch on a moment's notice is a dangerous relic of the Cold War," Obama said in an interview published by Arms Control Today in September 2008. "Such policies increase the risk of catastrophic accidents or miscalculation. I believe that we must address this dangerous situation."

Obama is not alone in that assessment. A number of former secretaries of state and retired high-ranking military officers, including former commanders of the U.S. Strategic Command and the Navy's nuclear submarine fleet, agree.

The Obama administration has proposed developing a new, stealthy nuclear-armed cruise missile, dubbed the long-range standoff (LRSO) missile, to replace the air-launched cruise missile (ALCM), which is due for retirement in 2030. The Air Force plans to buy 1,000 to 1,100 of these new missiles — roughly double the 572 ALCMs now in its stockpile — with a price tag of $20 billion to $30 billion.

The new missile would be faster, more accurate and longer-range than the current model. And that's not good, says Young, the UCS analyst. Why? Because, he says, it will make it easier for the United States to use nuclear weapons.

"The bottom line," says Young, "is the proposed missile would not enhance our security. In fact, it would do the exact opposite."

3. Reduce the U.S. Nuclear Arsenal by a Third

Obama should cut the 1,550 long-range nuclear weapons the United States currently deploys to 1,000, a third lower than the number negotiated with the Russians under the New START arms control agreement. After all, he plainly stated in a June 2013 speech that such a reduction is eminently feasible.

"After a comprehensive [Pentagon] review," Obama said during a trip to Germany, "I've determined that we can ensure the security of America and our allies, and maintain a strong and credible strategic deterrent, while reducing our deployed strategic nuclear weapons by up to one-third."

According to Young, New START verification procedures would be able to substantiate such a reduction without requiring a new treaty; a smaller nuclear force would save U.S. taxpayers tens if not hundreds of billions of dollars; and, despite its aggressive actions in Ukraine, Russia would likely follow suit and reduce its arsenal, especially given its ongoing financial crisis.

"Some nuclear proponents may argue that reducing the U.S. nuclear arsenal could embolden Russia," Young says. "But cutting 1,550 deployed strategic warheads to 1,000 would have no effect on nuclear deterrence whatsoever and save resources for higher priorities."

In 2010, the Pentagon issued a report that defined the goals for U.S. nuclear policy, strategy, capabilities and force posture for the following five to 10 years. Called the Nuclear Posture Review, it stated: "The United States will continue to strengthen conventional capabilities and reduce the role of nuclear weapons in deterring non-nuclear attacks, with the objective of making deterrence of nuclear attack on the United States and our allies the sole purpose of U.S. nuclear weapons."

The Nuclear Posture Review listed "a narrow range of contingencies in which U.S. nuclear weapons may still play a role in deterring a conventional or CBW [chemical or biological weapons] attack against the United States or its allies and partners" for countries that either have nuclear weapons or are not in compliance with their nonproliferation agreements.

Young says that "narrow range of contingencies" is shortsighted.

Obama at the Finish Line

In October 2009, President Obama was awarded the Nobel Peace Prize, largely due to his efforts to promote nuclear disarmament. Shortly after learning he had won the prize, he held a press conference in the White House Rose Garden.

"I will accept this award as a call to action, a call for all nations to confront the common challenges of the 21st century," he told reporters. "We cannot tolerate a world in which nuclear weapons spread to more nations and in which the terror of a nuclear holocaust endangers more people. And that's why we've begun to take concrete steps to pursue a world without nuclear weapons: because all nations have the right to pursue peaceful nuclear power, but all nations have the responsibility to demonstrate their peaceful intentions."

It's been more than six years since Obama made that statement, and there is plenty left to do. But the president can still heed that call to action by taking a few more concrete steps before he leaves office. We would all be a lot safer if he did.