Growing up poor, I often ate what I could steal. As a well-fed adult, I just can't bear to see good food go uneaten 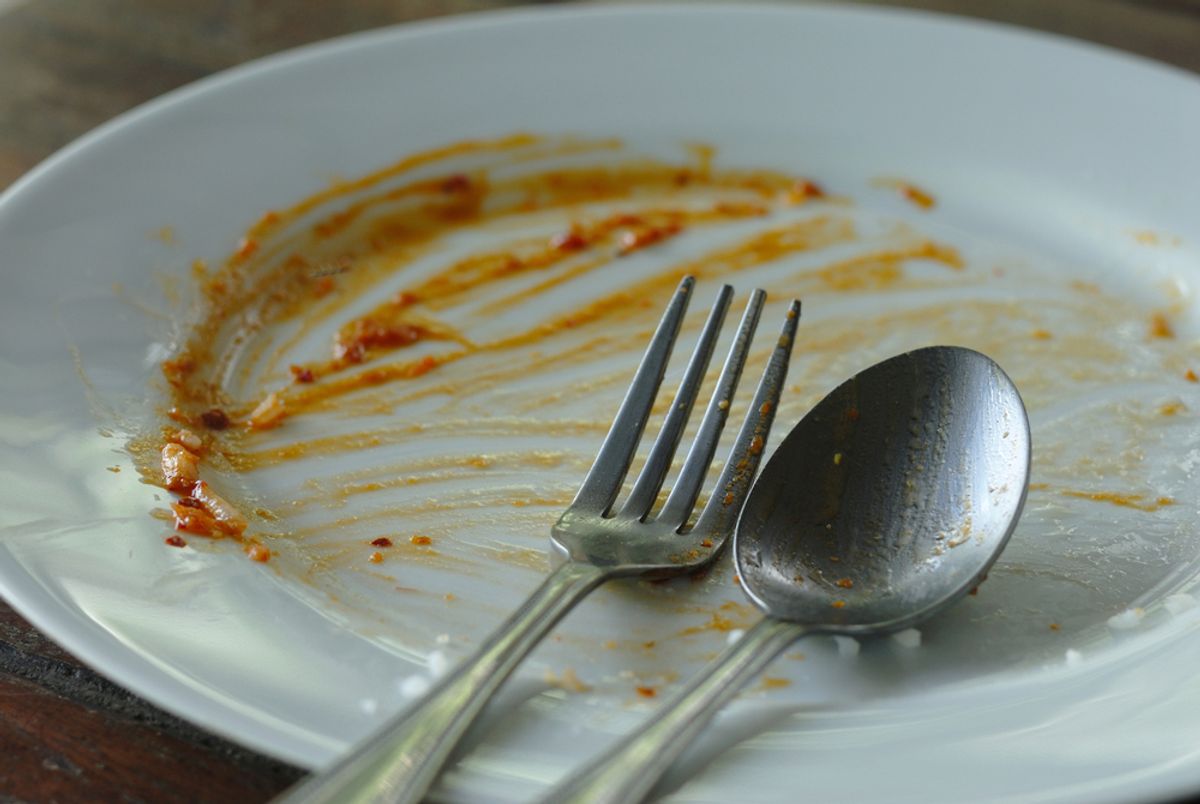 Almost two decades ago on New Year’s Eve, my friend Bett and I had dinner with two friends who were older than us, and who intended to make an early night of it. Bett and I had other intentions — we were going to the big party at the Railyard. But that was still hours away, so we headed into town in search of mischief.

More from Narratively: "What I Learned Exposing Myself on LiveJournal"

We stopped briefly at a restaurant where Bett’s girlfriend was having dinner with some of her friends. As we talked with them I ordered an appetizer, even though I had just eaten dinner.

As we left the restaurant, Bett mentioned that many of the town’s art galleries were open, and were serving free drinks. We agreed that alcoholic freeloading would be a fine way to pass the time before the party, and off we went.

More from Narratively: "The Al Gore of Polynesia"

It turned out that some of the galleries offered free food as well as booze. I partook mightily of both, even though I’d just eaten dinner followed by an appetizer.

As I chomped on some buffalo wings, I saw Bett looking at me.

“You can’t turn down food, even when you’re not hungry, can you?” she asked.

“You’re right,” I said. Without my explaining why, she knew and understood.

There were many times when the only way I could eat was to steal food. I was born in Glasgow, Scotland, in 1966, in the Maryhill district, which was a Third World hidden within the first. For most of my childhood, hot water on tap was a fantasy, having a toilet in your home was a luxury, and food of any quality was seldom available. One of the most painful moments of my life, a moment of pure grief, pure loss, was caused not by the death of a person but by being deprived of a meal.

I was in my early teens, and I had just been handed a plate of chicken. This was a rarity. My diet was almost exclusively one of fried processed meat — usually cheap sausages — potatoes, eggs and white bread.

Before I could eat any of it, a woman whose role was nominally that of parent came into the room. She was drunk at noon, and she didn’t like me. She said something unpleasant to me, I responded in kind, and she knocked the plate of food out of my hands. As she stomped the chicken into the dirty carpet, the hopelessness I felt was so huge that there was room inside me for nothing else.

That woman is dead now, but, more than thirty years later, I can still see the look of dumb malice on her drunken face. In the years to come, I was to mourn the loss of that meal more times than I could keep count of.

There were other times, times of inadequate food or no food at all. And, when these times were over, I still lived in fear of their return. I could never bring myself to pass up a chance to eat. I still felt that I had to take it whenever and wherever I could get it, because if I ever had to go hungry again I didn’t want to have to remember the times when I could have eaten but chose not to.

Whatever we think our life’s purpose is, each living day centers around one thing: obtaining what we call food and taking it into our bodies, then doing it again soon after, and then again. Many of us can do so without thought of its terrible, urgent importance.

My friend Charles Bowden is now dead as well, but when he was alive he knew what was most important. In a book called Blues for Cannibals, he wrote: “Before there was a language of words on paper, there must have been a language of food. Speech begins with the fire and the kettle. I am sure of this.”

I’m sure of it too. Chuck Bowden loved to cook, but he didn’t eat excessively, and, though tall and broad, had a lean build. I also love to cook, and I am also lean, and to look at me you would assume that I am also moderate in my eating habits. That assumption was made by a friend who invited me, along with some other friends, to his house to eat the racks of ribs he was grilling. He had invited four of us, but only two of us were able to come. “Oh, well,” the host said to me, the first to arrive, “I guess you’ll be carting off plenty of leftovers.”

He was wrong. As the three of us sat at the dining table, my two friends — both large men — ate their share and then stopped. I ate my share, and then ate the racks that had been intended for our absent friends.

When I left, there was a single uneaten rack of ribs, and some beans. My host put the food in Tupperware and I took it with me. When I got home, I ate it before going to bed, enjoyed it, and fell asleep contentedly. The next day, my friend who’d cooked it asked jokingly about any ill effects involving a toilet, and seemed surprised when I told him I felt fine.

As a result, I think, of a long practice of Zen meditation, and no lack of food, my constant hunger has lessened from a compulsion to an eccentricity or quirk, but it refuses to be killed by sustenance or logic, and still preoccupies me. I recently read a crime novel in which the protagonist, waiting for a friend in a small restaurant, orders two hot dogs, one for him and one for his friend. He then realizes that his friend is being attacked nearby, and goes outside to help her. Mayhem ensues, after which he returns to the restaurant with his friend in tow, and they find their food waiting for them on the counter. Shaken by the violence they have just experienced, they don’t feel like eating, so they just have drinks instead.

Even though they’re in physical danger, and the protagonist’s life is crumbling around him, all I could think of was the wasted food, those two hot dogs going cold and uneaten.