A monster the GOP could've avoided: The conservative establishment created Trump—and now they can't destroy him

As right-wing apparatchiks scramble for a way to get rid of the GOP frontrunner, the irony becomes overwhelming 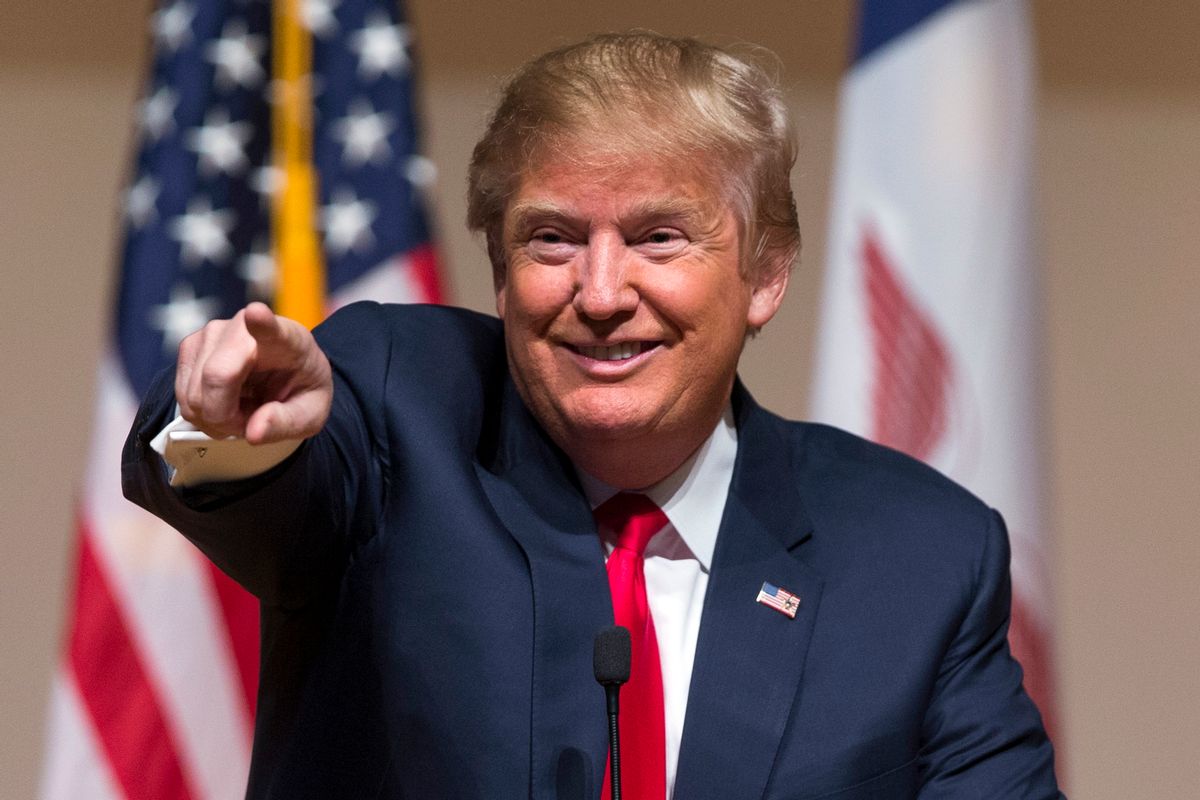 Donald Trump was finally correct about something. Perhaps the most accurate evaluation of his own campaign came during a rally on Saturday when the billionaire reality show celeb and GOP presidential frontrunner said, "I could stand in the middle of 5th Avenue and shoot somebody, and I wouldn't lose any voters," said Trump. "It’s, like, incredible."

Depending on the circumstances, it's absolutely true that Trump could shoot someone and, during his arraignment, his poll numbers would climb by five to eight points, while his overzealous disciples would stand in solidarity with Trump, who, they believe, is once and always just like them.

In fact, based on what we've observed during the primary season so far, shooting someone in midtown Manhattan would almost immediately become the thing to do within the GOP primary field. Trump's nonsensical blurting is now a successful campaign strategy and we can expect more Trumps in future elections, further debasing the process while elevating superficiality over seriousness.

While we're here, no, it's not all that incredible. It's entirely predictable, actually, given the downward spiral of the Republican Party since at least 1994, when the ascendancy of over-the-top, self-satirical GOP cartoon characters began to supersede rational, grown-up policy initiatives. The trend that began during the Bill Clinton years and was amplified during the George W. Bush years, when we were told that criticizing the commander-in-chief while troops were in harm's way was a treason-worthy trespass. Somehow, Bush managed to get away with all varieties of both gibberish and nationalistic horseshit, revered among GOP loyalists. After Bush, along came Sarah Palin, whose taxonomy is, for all intents and purposes, a proto-Trump organism.

Who, then, is ultimately responsible for the eras of Bush, Palin and Trump?

We only need to look as far as the latest issue of The National Review and the authors of an hilariously ironic group-article titled, "Conservatives against Trump."

In case you missed it, the op-ed contained missives from leading conservatives such as Bill Kristol, Glenn Beck, Brent Bozell, Erick Erickson and Dana Loesch. Notable, too, is the editor of The National Review, Rich Lowry. You might remember Lowry's embarrassing reaction to Palin's 2008 Republican National Convention address, wherein he gushed:

I'm sure I'm not the only male in America who, when Palin dropped her first wink, sat up a little straighter on the couch and said, "Hey, I think she just winked at me." And her smile. By the end, when she clearly knew she was doing well, it was so sparkling it was almost mesmerizing. It sent little starbursts through the screen and ricocheting around the living rooms of America. This is a quality that can't be learned; it's either something you have or you don't, and man, she's got it.

But guess what? They built this.

Kristol, Erickson, Lowry and the others built Trump, and now they're scrambling over themselves to run away from the bewigged monster they themselves helped to manufacture. Indeed, without George W. Bush, Sarah Palin and the conservative entertainment complex, helmed in part by Glenn Beck, Donald Trump probably wouldn't be the GOP frontrunner today and it's unlikely he would've run in the first place. Trump is nothing if not perceptive of the national zeitgeist and he knew that if Palin could become a conservative folk hero, despite her screechy voice and unapologetic cluelessness, he'd easily be able to knock it out of the park.

It's difficult to find a more ironical story in modern American politics than Kristol's hatred of Trump, knowing that he was one of several conservative operatives who helped discover Palin, thus opening a massive Pandora's box of nitwittery.

Rewind to 2007, when Kristol was responsible for scouting a game-changing presidential candidate who could, at that time, take on Hillary Clinton. During a conservative-themed cruise to Alaska, Kristol and several other apparatchiks visited with a little-known governor named Sarah Palin. In spite of her obvious lack of intellectual curiosity or grasp of basic sentence structure, Kristol's team enthusiastically added her name to a short-list that would eventually find its way to John McCain the following year.

Prior to John McCain's choice of Palin as his running mate, Kristol was closely associated with the Bush administration and its strategy of political expedience over long-term policy feasibility. The Iraq War, for example, was poorly conceived and so shoddily executed partly due to Kristol's neocon ambitions and fantastical expectations about how nation-building in the Middle East might turn out. Worse yet, it was conceived to all but guarantee a successful reelection campaign for Bush since presidencies rarely change hands in the early days of a war, especially in the newly-fabricated age of personality cults. Never mind the cost in lives or money, this was about fulfilling a frivolous political goal, and it was sold with all of the patriotic superlatives that effectively conditioned Republicans to embrace the politics of Donald Trump.

Taken as a whole, operatives like Kristol skewed the trajectory of their party from being a relatively balanced mix of populism and ideology into a political outfit that's solely interested in winning at any cost, reasonable policy ideas be damned -- even if it means glaring contradictions, or nominating an empty suit like Trump, Palin or Bush, or if it means bankrupting the treasury with ill-conceived tax cuts and two horrendous wars.

Kristol's GOP is about stunt-casting and pandering to the basest human instincts of its voters, and he deserves to be held accountable for all that. As we can clearly observe in The National Review this week, they'll never own their wrongness, nor will they ever admit that they planted the fuzzy orange seeds that gave us the age of Trump. But the party of personal responsibility so rarely is, so don't hold your breath waiting for an apology.

For eight years and more, we've been warning the GOP about the bumper-sticker blurting -- the patriotic Mad Libs of empty suits like Trump, Bush and Palin. Only now, after it's too late, are some of them beginning to see the light. Let historians record that Trump's seeming invincibility didn't happen in a vacuum. He's not a political outlier, he's the future of the Republican Party, and we only need to look to his most vocal conservative opponents to discover who's responsible for giving us the Trump clown show.