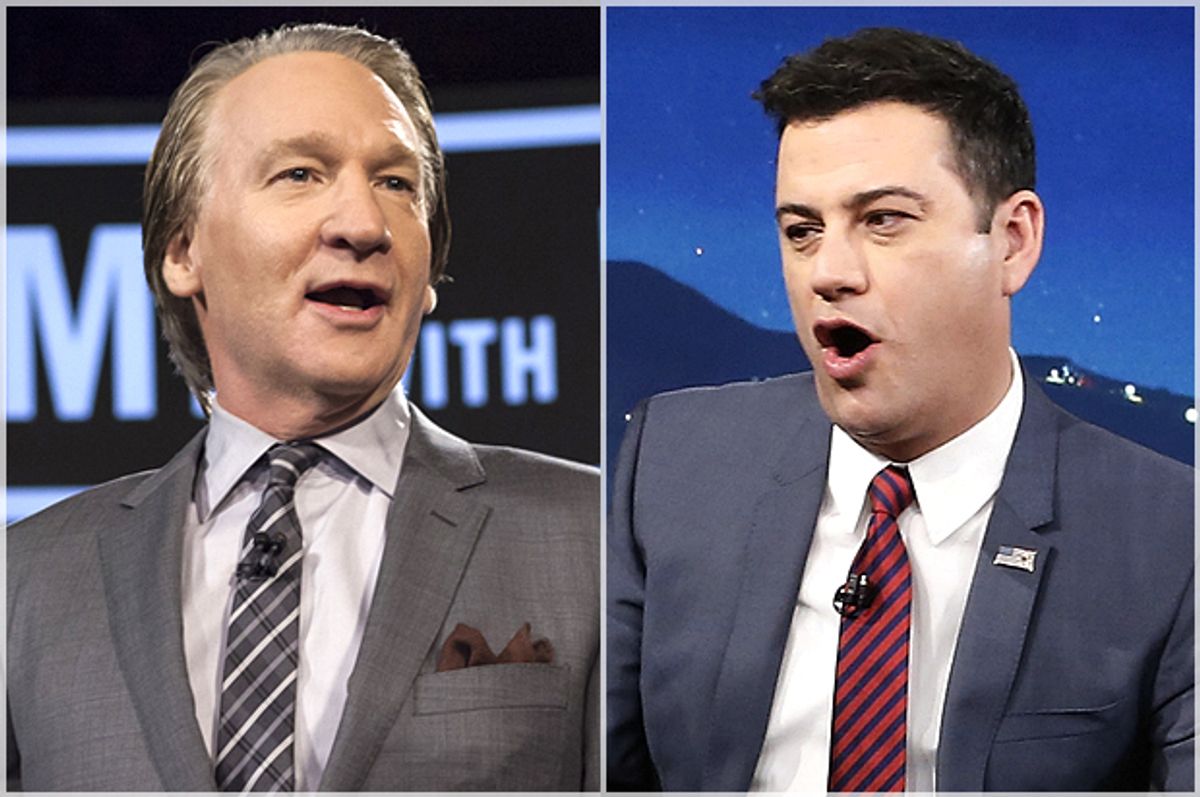 Larry Wilmore, of course, got there first. On January 13, the night before the Academy Awards nominees were announced, Wilmore’s “The Nightly Show” ran a hilarious and terrifyingly prescient segment “A Preview Of Upcoming Black Oscar Snubs,” where correspondent Robin Thede presented the nominees that were certain to be overlooked the next day. F. Gary Gray, director of “Straight Outta Compton,” Michael B. Jordan, star of “Creed,” Will Smith, star of “Concussion,” and Kitana Kiki Rodriguez, the lead of “Tangerine.” (“Rodriguez’ haunting portrayal of a trans woman was brave. But it wasn’t Jennifer-Lawrence-invents-a-mop brave!”) It’s a slightly ludicrous sketch; what sells it is Thede’s over-the-top enthusiasm, paired with her perfectly Los Angeles hair and outfit. When she opens the envelope to find Jordan’s name, she squeals with enthusiasm. Wilmore asks why she’s so excited—didn’t she just confirm that he wouldn’t win the nomination? She responds, with a glossy respect for status that is straight outta Hollywood—“I know, but it’s still the Oscars.”

It’s incredible, in a sort of horrifying way, that Wilmore and Thede got it exactly right; every single one of those black creatives was shut out for a nomination for the upcoming Academy Awards, which air February 28. At the same time, despite plummeting faith in the Academy of Motion Picture Arts and Sciences, it’s still the Oscars—Hollywood’s foremost metric for films that are trying to be more than just blockbusters, that might be trying to say or mean or do something more profound. As a result, the topic is buzzing—on Twitter, on CNN, in publications as disdainful of pop culture trends as the Economist, and even in the U.K. But as Charlotte Rampling, Michael Caine, and Julie Delpy have demonstrated, the most frustrating and illuminating responses come from within the business, from Hollywood itself. Some Hollywood luminaries are calling for a boycott; others are busy calling critics of AMPAS racists. There’s a lot of gray area in the middle that touches on unconscious bias, the motion picture industry, and the bureaucracy of a 6,000-member voting body.

And there is the unique complicity of everyone making fun of the Academy in its time of #OscarsSoWhite bad PR; after all, most of those people are members of a highly segregated and widely disparate media industry. Nowhere is this more ironic than in late-night television, where not a single person of color holds an hourlong show, on broadcast television or on cable. Comedy Central employs the only late-night hosts of color on all of American television, and they’re both black men on half-hour liberal news shows. “Saturday Night Live,” that other storied late-night institution, has been the subject of its own struggles to diversify for years. This weekend, building on the embarrassing situation involving the nominations for “Straight Outta Compton” and “Creed,” in which only the white creatives were honored for each, “SNL” did a quite funny segment where increasingly marginal white characters in clearly black-centric films were nominated for their roles. One is a guy who tells future Supreme Court Justice Thurgood Marshall that the library is closing in five minutes; another is a confused tourist holding a camera who wanders into a frame; a third is an unseen voice on the phone in a scene from a fictional film about racist predatory loan practices. They all win the award, of course. But just a few years ago, “Saturday Night Live” wouldn’t have had the black creative talent to play those snubbed actors; outside of Kenan Thompson, who has been a cast member since 2003, the variety show has made a huge investment in adding to their black cast members just in the last few years: Jay Pharoah, Leslie Jones, Michael Che, and Sasheer Zamata. Che is the first “Weekend Update” anchor of color, alongside Colin Jost. Even with this cast, “SNL” had to use Pharoah for two different characters, doing some kind of Herculean costume change backstage to make him both a “Creed”-esque boxer in the first “film” and a “Beasts Of No Nation”-esque African warlord in the last. Needless to say, the show had no trouble finding five white men to play the actors getting nominated.

“The Daily Show With Trevor Noah” did a low-key conversation between host Trevor Noah and correspondent Roy Wood, Jr., where they both tried to re-imagine “Creed” and “Straight Outta Compton” as films that might appeal to the 84 percent white Oscar voting bloc. (Their solution was to make everyone a slave, or a freed slave, or thinking about their own oppression, or humming a Negro spiritual.)

Over on ABC, “Jimmy Kimmel Live!,” did a very similar sketch, five days later. Both wanted to poke fun at the Academy’s taste in films about black people. Except “The Daily Show”’s sketch made jokes about a white savior complex, and Kimmel’s… made fun of African-American Vernacular English? The host videoconferences with an “AMPAS public relations director” who explains that by changing “The Big Short” to “The Big Shawty,” and “Room” to “Crib,” they will now be more inclusive of black people. It had the bones of being a smart critique. Perhaps it would be worth observing that Hollywood typecasts and pigeonholes its black performers and even narratives featuring black characters; perhaps it would be worth observing that this is the exact kind of ham-fisted attempt at a public relations solution that a shortsighted Hollywood PR team might execute. But with one white man strategizing to another, it resembles, a little too closely, the backroom conversations that appear to actually be happening in Hollywood. The result is that it’s demeaning as hell (if apparently well-intentioned).

Bill Maher, as is his wont, dispensed with the illusion of nondiscrimination entirely. Speaking, once again, to exclusively white men—Seth MacFarlane and Florida Representative Alan Grayson—Maher pinned the Oscars diversity problem on racist Asians:

"The dirty little secret… is most movies are made now with an eye to the foreign market, and Asians really are racist. … I’m just honest. They don’t want to see black people generally in their movies. The Hollywood executives are, like: We’re not racist, we just have to pretend to be racists because we’re capitalists. We want to sell our movies in China (and) they don’t like Kevin Hart."

Maher has become a master of the kind of racism cloaked in liberalism and objectivity that currently populates Internet comment sections; this statement is no exception. “I’m just being honest” is the oldest trick in the book for adding legitimacy to any offensive statement, one that Donald Trump is intimately familiar with. Perhaps there is a point to be made about Hollywood making films for a more conservative international market—perhaps—but a) not only would that discount some things we know to be true, like the “Fast And Furious” franchise’s and "Star Wars: The Force Awakens”’ monumental worldwide numbers, b) what Hollywood executives plan for international blockbusters very, very rarely overlaps with what Hollywood executives plan for Oscar bait. Not only is Maher wrong, he’s being a dick; but anyway, that’s what Bill Maher does. What’s more appalling, perhaps, is the hypocrisy—and it’s one that includes Maher, Kimmel, and every other white comedian polishing an #OscarsSoWhite joke; it even includes the still predominatly white “Saturday Night Live,” despite the show’s significant advances in the last few years.

Here’s the takeaway: Of the myriad comedic takes on diversity in the Oscars in the last two weeks, only Comedy Central hosted comedy on the issue that was performed by the demographic that was most obviously marginalized in this year’s nominees. “Saturday Night Live” presented one that was performed by an ensemble audience. “Jimmy Kimmel Live!” and “Real Time With Bill Maher” both decided to tackle diversity with only white performers or panelists on stage. Is it really that surprising that those two skits were the most controversial, offensive, and/or simply unfunny? Late-night is another side of Hollywood, but it is still part of the same organism that spawns the Academy. It’s bizarre, and perplexing, that the white late-night comics who are so eager to poke fun at the AMPAS for a lack of diversity don’t see the problems on their own stage.