Donald Trump got lucky: He's only winning because he's competing against clowns and losers 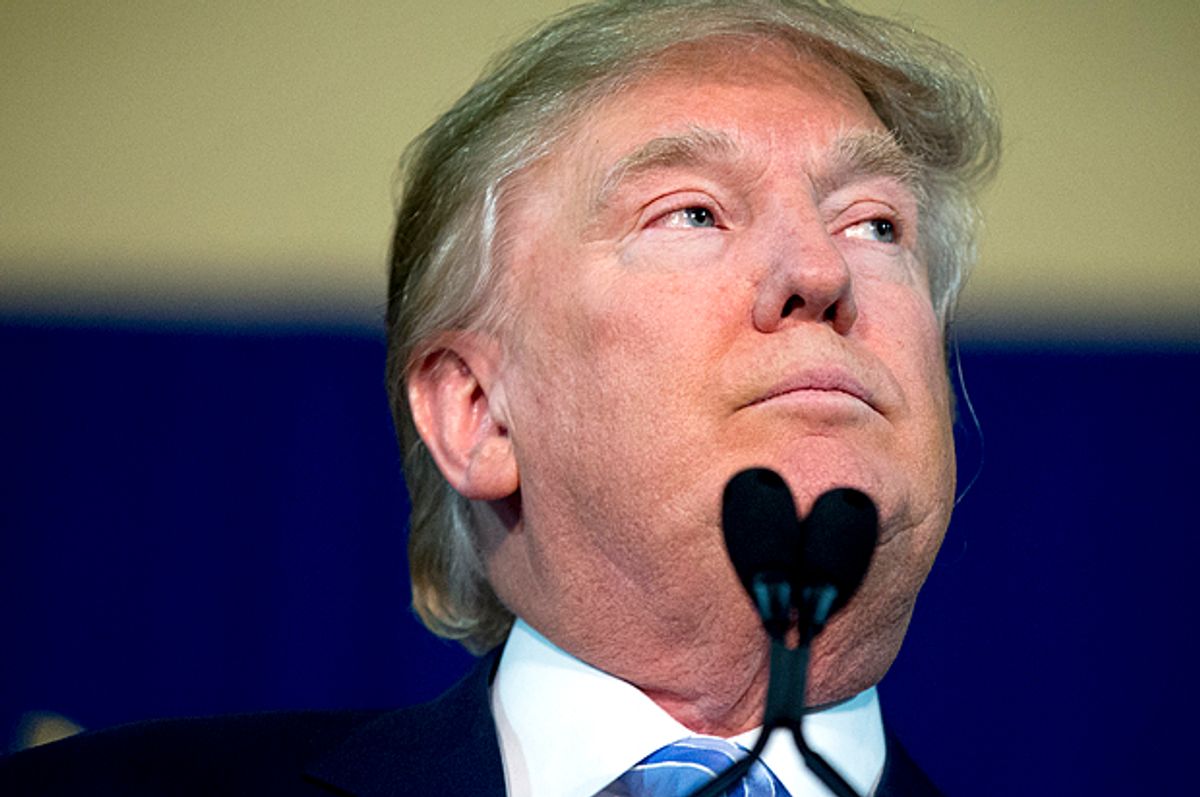 If you want an object lesson in why the Republican establishment is struggling so hard to unseat Donald Trump from his spot as poll frontrunner, look no further than Ross Douthat's self-contradictory behavior over the weekend. The New York Times columnist took to Twitter on Thursday to make fun of the National Review's  ridiculous (and also self-contradictory) "Against Trump" issue.

Douthat immediately proved himself incapable of taking his own high-minded advice, however, dedicating his Saturday column to what he believes is the strategy for dethroning Trump. (Nice of him to come in with this a whole week before the Iowa caucus.) He recommends painting Trump as a con artist, a criminal, and the kind of jerk that will turn on his supporters just as quickly as he turns on his enemies.

Noticeably absent, however, from Douthat's recommendations: Any hint of who, exactly, the Republican establishment should back instead of Trump. For someone who can't go five minutes without reminding everyone what a holy roller he  is, Douthat sure needs to refresh himself on the value of not throwing stones inside of glass houses.

Douthat is easy to pick on, of course, but his dilemma says a lot about why the Republicans are in the situation they are in now. Douthat's not wrong that the best way to unseat Trump would be to offer an compelling alternative. As the old saying goes, the best way to get over someone is to get under someone else. But who exactly will that be?

Ted Cruz is an unsatisfying alternative, especially for the establishment. He's one of those unsettlingly awful people who makes anyone who shares space with him feel gross about it, and he has a shockingly long list of people, especially fellow Republicans, who are willing to trash him in public because of it. He also does stuff like this: Both Trump and Cruz will say anything for attention and votes, but Trump makes it seem fun and effortless, whereas Cruz comes across as a vacuum salesman.

Marco Rubio, of course, suits the establishment hope for a candidate who pivots swiftly between "blandly inoffensive" to trick low-information voters and "blood-thirsty and vicious" when speaking to right wing audiences. But voters tried that with Mitt Romney in 2012 and it ended up backfiring when a hidden video showcasing the nasty heart that beats under the genial public persona was circulated. It's understandable that base voters might be wary of backing another two-faced candidate when that strategy failed last time.

What about Jeb Bush? Beyond the fact that his name is actually more an albatross than an asset these days, the man himself is a walking cringe comedy. Trump joked about how he could shoot someone and still not lose votes, and Jeb Bush decided to respond by acting like a schoolmarm, as evidenced by tweets from New York Times reporter Ashley Parker:

Jeb on Trump: "If he shot somebody, he’ll probably be convicted of a first degree felony and sent to prison." (1/2)

And no one likes someone who ruins a good joke by getting super literal about. That's all I'm saying.

Now Michael Bloomberg is considering throwing his hat in the ring. But if voters want a New Yorker with an outsized ego who thinks that having a lot of money means he's qualified to run the country,  they already have Donald Trump. Who at least is entertaining.

Ben Carson can't do a good job of hiding that he can't find the countries he would like to bomb on a map. Carly Fiorina "borrowed" some other people's children without permission to use as props to shame women who have abortions. Chris Christie is a jerk like Trump, but without the humor or charm necessary to deflect criticism.

Last spring, the narrative was that the Republicans had a deep bench of candidates to roll out. But if you actually read the conservative press, the reality was that GOP voters didn't see it that way at all. Voters are sick of the "conventional pieties that most Republican politicians have learned to recite," Daniel Larison of the American Conservative wrote back in November, and that doesn't seem to have changed since then. Trump, at least, is something different.

Republicans have watched two uninspiring candidates get trounced by Barack Obama, who symbolizes everything they fear about the shift towards a more cosmopolitan America. While Hillary Clinton is a different person, to conservatives, her campaign is like Obama's, a representation of how this country is becoming less white male dominated and less rural, and more about what Ted Cruz euphemistically calls "New York values".

This desperation is what is likely fueling Trump's campaign the most. His jibber-jabber about "winning"  is silly to outsiders, but to many Republican voters, it's what they need to hear: That he's the man to beat Clinton. As much as he would like to think that it's his own scintillating personality that is driving people to support him, Trump's history of failing at politics prior to this election shows that he's actually not the mad genius he thinks he is.

No, Trump is, in a lot of of ways, just lucky. He happened to step into the perfect situation, where the Democrats are likely to nominate a formidable candidate who has off the charts name recognition and a pre-existing base of support, and the Republicans have a "deep" bench of hilariously shallow and ineffectual candidates. He's something different in an environment where the same-old, same-old keeps failing Republican voters. And that, more than anything else, is why all attempts to unseat him continue to fail.