Fine, just call him the N-word: All the Republicans want to do is say it. Would be more honest if they did

GOP candidates use every trick to slur Obama without using the word. Just tell us what you really feel, PC warriors 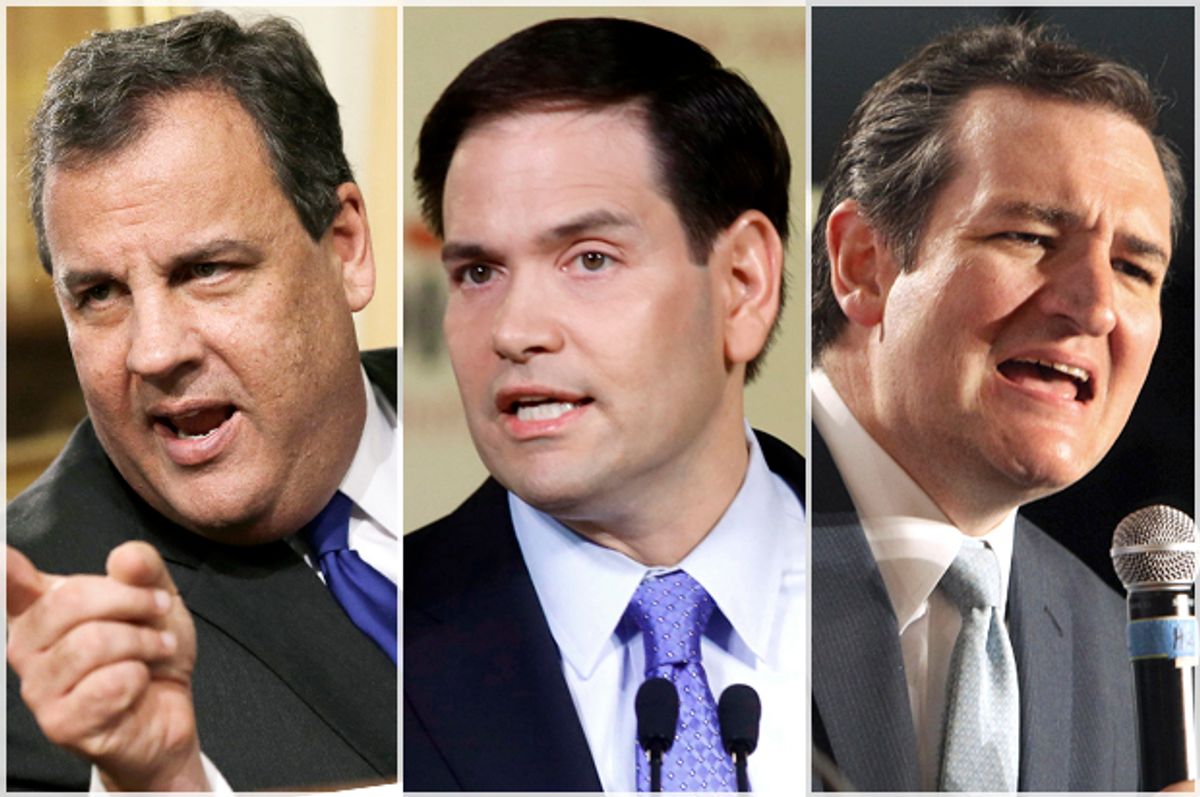 In his final State of the Union speech, President Barack Obama made a plea for a return to civility, intelligence and courage in American politics.

In many ways, this is a standard script for the political human zoo that has been the 2016 Republican presidential primary campaign.

In their last debate, the GOP candidates worshiped their personal saint-cum-mascot Ronald Reagan, and paid homage to discredited “trickle down” economic theories and the “Laffer curve.” The Republican Party’s near pathological obsession with guns was also on full display. To that end, Dirty Harry and Charles Bronson inspired fantasies about “good guys with guns” always being able to stop “a bad guy with a gun” commingled with delusional ideas about American foreign policy that were culled from bad techno thriller novels and Chuck Norris action movies.

And, of course, for Republicans, the United States is like Rome before the collapse, with Obama as Nero, while the country’s enemies, the barbarians at the gates, are sharpening their straight razors to slit the throats of the American people. The Republican 2016 candidates know their public quite well as they conjured up images of wicked Muslim refugees who are all human bombs in waiting. The only people who can stop these millions of Islamic evildoers are the hyper-masculine American heroes in the Republican Party, their version of Churchill’s “rough men” who “stand ready to visit violence on those who would harm us” (and as Donald Trump so proudly proclaimed, torturing and killing the innocent family members of those people who would even think of doing America harm).

As Salon’s own Elias Isquith suggested, the Fox Business Channel debate may not have been the nadir of American politics, but it was a steaming mess of political scatology. Once again, the Republican Party’s 2016 presidential candidates have shown the American public (and world) how contemporary conservatism is now sociopathy in the form of political ideology.

But even by those low standards, the Republican candidates’ racism and authoritarian-fueled attacks on Barack Obama were especially vile and repugnant.

1. Modern American presidents are almost always the subject of conspiracy theories. Those conspiracy theories are a reflection of the anxieties and worries felt by a given community. The form and content of those conspiracies vary according to the political values and identities of the individuals and groups involved.

The election of Barack Obama in 2008 was met with “birtherism”—the conspiranoid fantasy that Obama was not eligible to be president of the United States of America because he was not a “natural born citizen.” Of course, this is absurd. Barack Obama’s mother is an American citizen and he was born in Hawaii. “Birtherism” (which is still believed by a significant percentage of Republicans) is a racist, white supremacist conspiracy theory that is predicated on a belief that black folks are not “real Americans,” i.e., “white.”

During last Thursday night’s Fox Business Channel debate, the Republican presidential primary candidates implied that Barack Obama, the president of the United States, is actually in league with Islamic terrorists. Ted Cruz said: “…we have a president who refuses to acknowledge the threat we face and even worse, who acts as an apologist for radical Islamic terrorism.”

...one of the things it did is it expanded Barack Obama's power to let in Syrian refugees. It enabled him -- the president to certify them en masse without mandating meaningful background checks.

I think that's a mistake. That's why I've been leading the fight to stop it… So you don't get to say we need to secure the borders, and at the same time try to give Barack Obama more authority to allow Middle Eastern refugees coming in, when the head of the FBI tells us they cannot vet them to determine if they are ISIS terrorists.

Rubio echoed the narrative that Barack Obama actually hates America and wants to see it weak and vulnerable with his claim that, “Barack Obama believes that America is an arrogant global power that needs to be cut down to size.”

This is beyond the foolishness of suggesting that a willful misreading of American law regarding “birthright” citizenship deems the country’s first black president ineligible for office. For Republicans, Obama is a black traitor, a Manchurian candidate, who may be the commander in chief of the United States military and the country’s chief executive, but somehow wants to see the United States weak, vulnerable and under threat from enemies abroad and at home.

2. In the days before theUnited States commemorated the legacy of Dr. Martin Luther King Jr. and the civil rights movement, the Republican candidates chose to defame the ongoing struggles of black and brown Americans for full human rights in the face of police thuggery and violence. The Republican Party’s use of “law and order” rhetoric is a cornerstone of its racist Southern Strategy, one where negrophobia and anti-black animus are now cloaked behind ostensibly “color blind” and “race neutral” language. Law and order rhetoric is a powerful tool for Republican candidates because it fuses together white racial resentment and old fashion racism with the high levels of authoritarian and social dominance behavior that is common among conservatives. The result is “racial authoritarianism.”

Racial authoritarians embrace, defend and encourage the thuggery of America’s police against black and brown people. They view the struggle for human dignity and rights by today’s Black Lives Matter activists, as well as the civil rights protesters of the 1960s and earlier, as that of “troublemakers,” “militants” or “outside agitators.”

"there's a chill wind blowing through law enforcement in this country." Here's why, the president of the United States and both his attorney's general, they give the benefit of the doubt to the criminal, not to the police officers.

That's the truth of the matter and you see it every time with this president. Every time he's got a chance, going all the way back to -- remember that Great Beer Summit he had after he messed up that time. This is a guy who just believes that law enforcement are the bad guys.

Ironically, racial authoritarianism also lets slip out basic truths, such as when police abuse apologists and others complain that America’s cops cannot do their jobs if they are held accountable for thuggery and brutality—especially when such criminal brutishness is directed at people of color. America’s modern police forces can trace their origins to the slave catchers of the antebellum South. When they abuse and kill unarmed black people during the Age of Obama, America’s police are simply following through on their historic role as enforcers of white supremacy.

For the racial authoritarians in the Republican Party, black people are to be silent and passive in their suffering. White conservatives are allowed to point loaded guns at police and federal authorities with impunity in America; but black citizens are never to use their constitutionally guaranteed rights of speech and assembly to resist unprovoked and undeserved State violence.

3. There were moments when the sixth Republican presidential primary debate almost sounded like a version of Thomas Dixon’s racist 1905 novel “The Clansman: An Historical Romance of the Ku Klux Klan.” Ted Cruz said that “China is running over president Obama like he is a child.” Likewise, Chris Christie described a 54-year-old man as a “petulant child.” Language has history. It takes on meaning from it. One does not require an advanced degree or training in either sociolinguistics or semiotics to know that calling an adult black man a “boy” or “child” is profoundly racist.

When Republican presidential candidates--the front-runners for a political organization that is the United States’ largest white identity organization--use such language it is not a mere turn of phrase or innocent error.

Calling Barack Obama a “boy” is their effort to humiliate the United States’ first black president by “putting him back in his place.” Moreover, when Republicans refer to Obama as a “boy” (as they have done on numerous occasions since Obama’s campaign and election in 2008) they are channeling the ghosts and demons of Jim and Jane Crow.

During Jim and Jane Crow (as well as the American slaveocracy) black men were not allowed the honorific of “Mister” by whites—especially in the South. They were instead called “boy,” “uncle” or “George.”

A black man could be amazingly accomplished and successful. But to the White Gaze he was just a “boy,” a man-child of sorts. This is the reason that black men wore placards during the American civil rights movement that read “I am a man.” Just as “black lives matter” is an assertion of the value of black life in a society that does not value black people, “I am a man” was a demand and a claim for equal justice in a country that viewed black men as something other and less than whites.

The racial logic of white supremacy mandates the emasculation of black men. When Chris Christie, Ted Cruz and other white conservatives call Obama a “boy,” they are trying to assert their power over not just Obama, but all black men in the United States. This is white male privilege as a fantasy of domination and subordination across the color line.

During almost every recent election cycle, the Republican Party engages in disingenuous hand-wringing and soul searching about why more black voters do not support it.

The answer is simple. A person of color would have to be either a fool or a self-interested political hustler like Ben Carson to get in bed with the Republican Party of the post-civil rights era.

The Fox Business Channel presidential primary debate was a reminder of how the Republican Party and the right-wing news entertainment media complex have spent more than eight years trying to find new ways to call Barack Obama—and by extension black Americans en masse—a “nigger” without actually using the slur. During Obama’s last months in office it would be more efficient, as well as refreshing, if the Republican Party and its elites dropped any pretense of respectable behavior and simply told the world what they really feel about the United States’ first black president.