I just watched Donald Trump win the Iowa caucus: Inside the one rally that sealed the deal

When Chuck Grassley spoke at a Trump rally, the calculus changed. There hasn't been this much energy since Obama 08 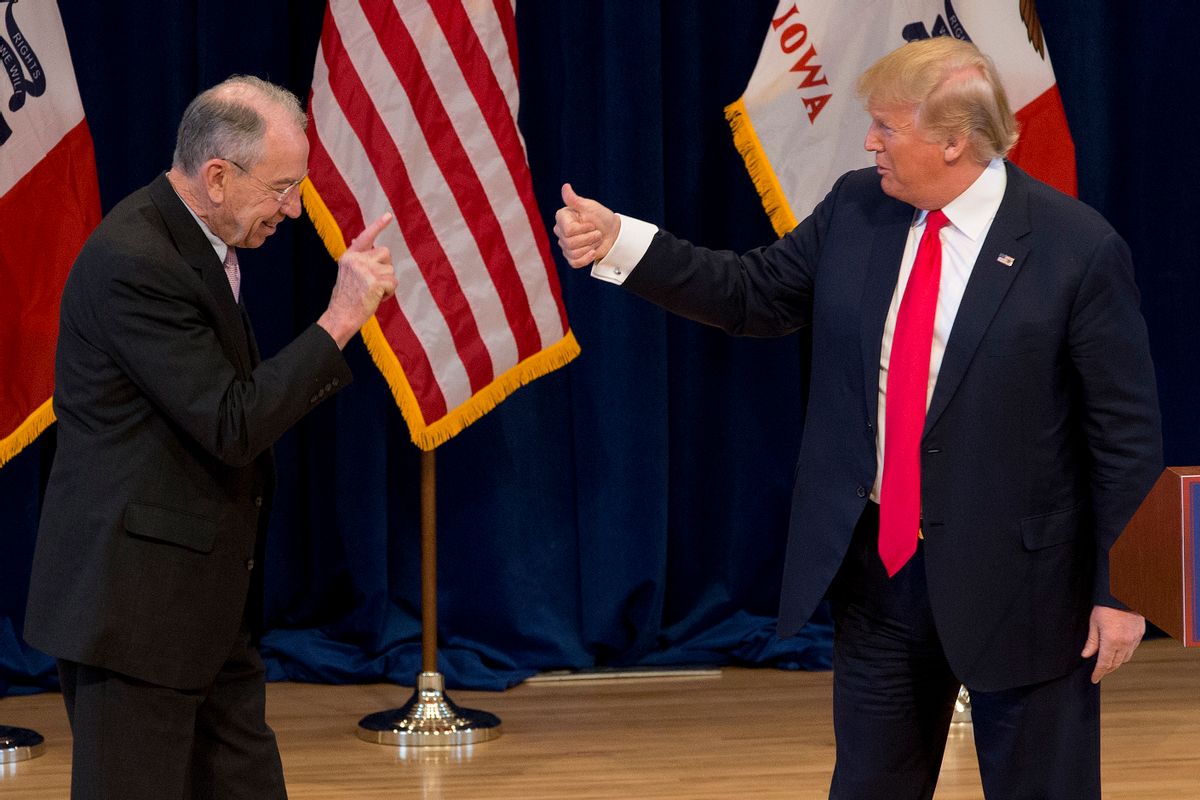 Sen. Chuck Grassley (R-Iowa) gave Donald Trump a big hand up in the Iowa Caucus race on Saturday, and he did so without an implicit endorsement. More like a wink and a nod. With the Real Clear Politics poll averages putting Trump at 32.2%, Ted Cruz at 27%, and Rubio in a distant third at 12.2%, what Grassley did on Saturday could make a big difference.

Trump spoke to an enthusiastic crowd over 600 people at Central College in Pella Saturday afternoon. Hundreds waited in the cold to get into the main auditorium, and perhaps several hundred more had to view the speech over a video feed in another room. Many were turned away, and others grew frustrated and left. I know that for a fact. I see it in their Facebook posts, as many in the crowd are friends and neighbors.

Despite the fact that I’m in local media, I almost didn’t get into the event, as despite assurances to the contrary, my name wasn’t on the press list. So I stood outside in the cold waiting at the press entrance with a couple of guys who flew in from Amsterdam specifically for Trump’s event in Pella, a town that’s very proud of its Dutch heritage. “But we’re from, like, the Dutch '60 Minutes'!,” they told the Secret Service agents at the door who barred their entry. That impressed exactly no one, except for maybe me.

Fortunately, Iowa State Sen. Brad Zaun was to introduce Trump. When Zaun arrived, he saw me, came over to chat, and asked me what I was doing waiting outside. I explained my dilemma, and Zaun patted me on the shoulder and said, “let me see what I can do.” A few minutes later a Secret Service agent came to get me, and let me in. I looked back as the door closed behind us at the sad faces of the Dutch journalists. They looked ready to weep. I wiggled my hand at them in sort of a weak compensatory wave, and shrugged, feeling like the puppy who had got rescued at the pound looking back at his rejected kennel mates.

I took a perch at the highest seat in the auditorium, and after a few minutes spied Grassley walk into the room. I was stunned. Iowa elected officials have historically shied away from making endorsements, and here was one of the most respected Iowa politicians of all time in the audience. I quickly texted a friend who works at a statewide media outlet to let her know Grassley was in the audience. She was covering another event, and couldn’t make it to Trump. Her text back was “Holy mackerel!” Then, “Let me know ASAP if he endorses! Oh my.”

Most often it’s assumed that Iowa’s highest elected officials don’t endorse in order to protect our first in the nation status. Things are slightly different this year. While not an endorsement, last week, Gov. Terry Branstad told reporters he wanted to see Ted Cruz lose because of his opposition to the Renewable Fuel Standard (RFS) and his ties to the oil industry. The RFS puts corn based ethanol into your gas tank, and helps support Iowa agriculture. It may well be the third rail of Iowa presidential politics.

Iowa Rep. Steve King, a Cruz supporter, nearly flipped when Branstad made his statement, but his objection was largely moot when Grassley backed Branstad. I was surprised Grassley said anything at all.

If you don’t live in Iowa, you may not know what a political force Grassley is and what his presence on Saturday means for Trump. Grassley has served in the Senate since 1981. In his last election he won 64% of the vote, and his approval ratings hover near that number. He’s won re-election term after term, brushing Democratic challengers off like a piece of lint. One election year he received 70% of the vote, and in other years he came close. Just last week Grassley broke the record on not missing a vote in the U.S. Senate; 22 years, six months, and six days. He has voted 7,520 times without missing one. The last time he missed a vote was when he was touring the midwest in 1993 with President Bill Clinton during a disastrous flooding season. Since he took office in 1981 he tours all 99 counties in the state when the Senate is out of session. This is called the “full Grassley” and Republican caucus candidates try to emulate it. Sure, some of the big media likes to make fun of Grassley, his tweets, some things he says, and even his clothes. But we don’t care. He’s our Chuck Grassley. He’s one of us, and we all know and respect him and we don’t care what anyone else says. I have no doubt that Grassley has spoken with and shook hands with tens of thousands of Iowans or more. What he thinks and says means something to us.

He’s also a dream for the Iowa media. It’s not hard for a member of the media to get Grassley on the phone. I’ve interviewed Grassley once a month for the radio for ten years. That’s 120 radio interviews in just one market over ten years, and that’s doesn’t count the times I’ve interviewed him when he is in town.

Grassley is a machine.

Did he come out and endorse Trump? Not in so many words. But when Grassley said "We have an opportunity once again to make America great again," using Trump’s slogan, every Iowan in the room knew what he meant, even if it came with a wink and a nod.

The Des Moines Register reports that Grassley will be with Marco Rubio on Tuesday. That will likely be seen as an implicit endorsement as well, and Rubio should milk it to his advantage. But whatever it means for both Trump and Rubio, Cruz’s chances today look much worse than they did a month ago. If his staff isn’t on the phone to Grassley, it should be.

Oh, and Trump? What did he say? It really didn’t matter. The audience loved it. And I’ll say that after attending dozens of events with nearly all of the presidential candidates of both parties for the past three caucus cycles, I haven’t seen or felt the energy in the room I did Saturday since Barack Obama was in town prior to the 2008 caucuses.