All my life people have told me to lose weight or else. At 74, I'm fat, healthy and done apologizing 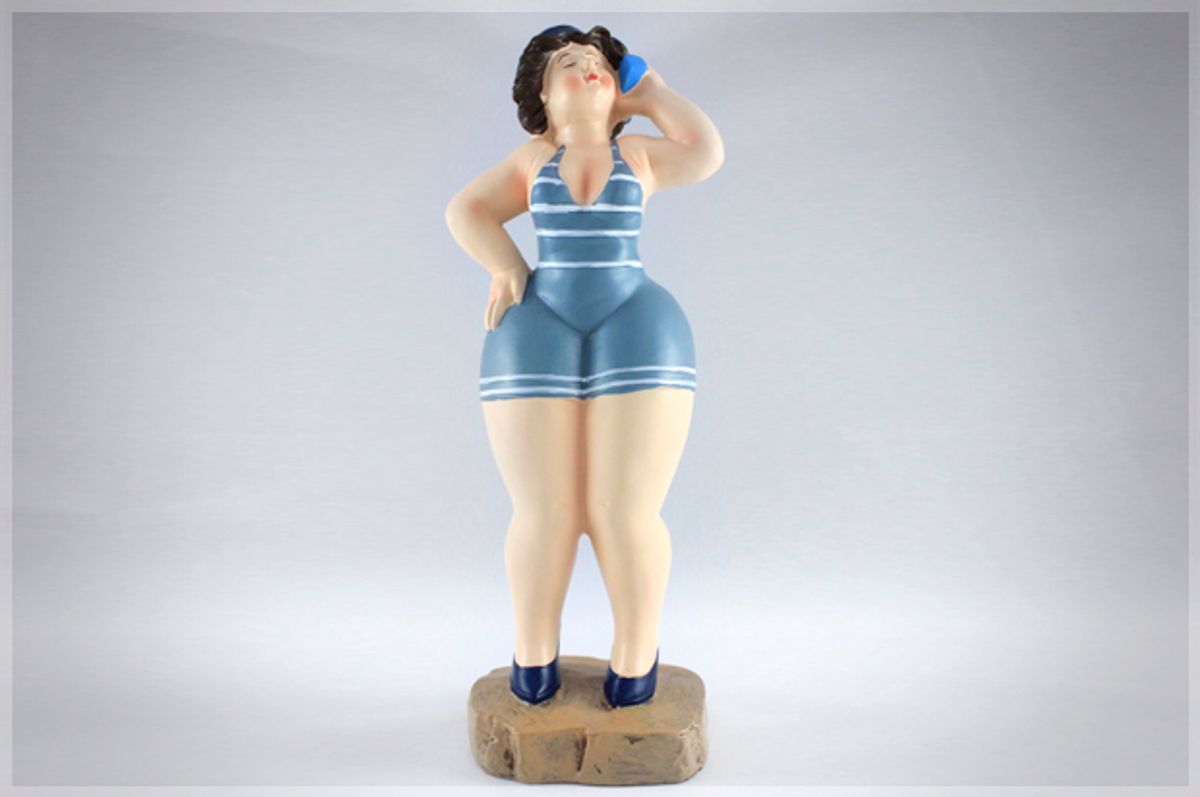 I was a fat kid, a fat teen, a fat adult, and have been “fat shamed” ever since I can remember. When I was a kid they just called it “teasing.” But there is one moment that stands out as the most humiliating of my life. I was getting on a scale at the doctor’s office when I was 10. He looked at me with disapproval bordering on contempt, then, turning to my mother, said, “She’s fat. And unhealthy. Put her on a diet,” and handed my mother a list of the usual 1,000-calorie-a-day bland mini-meals she was supposed to feed me. He didn’t say exactly what kind of health problem my weight was causing. Considering that I was very athletic, a great swimmer, ice skater and tree climber, it was unlikely that my weight was affecting me at all health-wise, at least at that time, but this was the beginning of a lifetime of dire warnings about the dread fate I was doomed to suffer because of my weight. At the top of the list was dying young. Ironically, at that time, I wasn’t even fat. I’ve seen pictures of myself at that age and at most I could be called pleasantly plump.

My mother, however, did not consider plumpness pleasant. This was the 1950s when her generation of Jews was desperately trying to fit into the American ideal of slimness. I’d inherited the short, big-hipped and thunder-thighed Eastern European body that she despised. Since she spent her life on diets, she assumed I should do the same. Dinners at home were strictly supervised by Mom, controlled for carb content. I could see her add the calories up in her head as I served myself. Meat and veggies were OK, but second helpings of potatoes were not allowed. Dessert was not on the menu. I longed for street pretzels and ice cream cones like the other kids got, but Mom nixed anything but low-calorie treats. French fries were off-limits. And despite all these restrictions, I shopped in the “chubby” department at the store. My childhood taught me that my body was the enemy, an enemy to be subdued at all costs. I went on diet after diet, but they all led to an equal but opposite binge. At 16 I got really skinny with the help of amphetamines, but luckily I hated the way they made me feel so I didn’t get addicted.

My weight seesawed from that point on. I’d lose, sometimes even becoming almost slim, only to rebound. I usually hovered around 175 pounds. At age 22 I spent a couple of years weighing 130 pounds, which was a heady experience. I got a boyfriend who wouldn’t have looked at me fat, but he dumped me anyway, despite my thinness. Rejection triggered regain.

I’ve lost and gained so much weight in my life I can’t really remember when I weighed what. I only know that slowly I got fatter, eventually weighing over 200 pounds. None of that weight slowed me down, however. I still ice skated, swam and ran up and down subway steps. But no matter how active I was, people kept warning me to lose weight “for my own good,” that my weight would take years off my life, that I was destined for an early grave if I didn’t lose. I hated those lectures the most because they were couched in concern for my health and so I didn’t know how to respond. Statements like, “I’m only saying this because I care about you, Erica,” made me cringe. I knew what the next sentence would be. And I knew that beneath these friends’ concern for my health lay their own fear of gaining weight and discomfort at being associated with socially unacceptable fat people.

By this time I was writing about health and medicine, so I knew more about the health consequences of obesity than most people. I wound up as a health writer because my boss at a publication I wrote for regularly assigned me to the health beat. He thought maybe it would encourage me to lose weight. What it did do was give me the confidence to stick up for myself with the medical profession, which is just as prejudiced against fat females as the rest of the population. An early feminist, I became a women’s libber and a fat libber. I joined NAAFA (National Association to Aid Fat Americans) and stopped dieting, which felt great. NAAFA was born in the late '60s when fat activists staged a "Fat-In" in New York and ate ice cream while burning posters of Twiggy.  NAAFA was a lifesaver at a time when self-acceptance was a radical concept for women like me. Despite some prurient interest by the press, focusing on the spectacle of fat women shamelessly declaring it was OK to weigh 350 pounds, the public didn't buy it. It's taken 40 years for the concept of “fat-shaming” as bigotry to catch on--barely

I wish I could say I remained perfectly healthy, but as time went on, my health was affected by my weight. I got diabetes at age 40, which threw me into a panic. I went on another crash diet, which triggered a bigger regain. Anxiety about my health just sent me to the refrigerator for comfort.

At the same time I was losing and gaining I was also smoking two packs a day, which arguably caused more damage to my health than my weight. I was rapidly developing emphysema. I stopped smoking at 40 but 30 years later developed COPD anyway. And yet, I didn’t endure a fraction of other people’s “concern” about my smoking that I endured about my weight.

I got married at 41, and wish I could report that it made me so happy I lost weight. NOT! My marriage was miserable and I just kept gaining. At 55 I weighed 265 pounds and was facing insulin injections. After a ton of research I decided to have gastric bypass surgery, which a lot of fat activists deride because they see it as giving in to social pressure. As a medical writer, I did my due diligence and found that gastric bypass surgery had rather miraculous results for diabetics, that a whopping 85 percent get off all medications and have normal blood sugar when they leave the operating room. This is obviously not because they lost weight, but because the surgery itself rearranges the hormones in your gut, decreasing insulin resistance. Unfortunately, I was in the 15 percent who weren't cured, probably because I’d had diabetes for so long, but I was substantially improved. I lost 75 pounds, eventually gaining 20 back, but my diabetes became mild and easily controllable with oral medications. Then, after the surgery, something unexpected happened:  I aged.  I didn’t die.  I went on to live a normal, relatively healthy life, proving wrong all the people who’d warned me about what my weight would mean for me as I got older.

Fast-forward here to age 72. I still have mild diabetes well controlled by oral meds, with the bonus of having taken Metformin, the most benign diabetes med, for 20 years. Metformin was recently discovered to be a miracle anti-aging drug. Ha! Take that, fat- shamers. I’ve had no diabetic complications. My blood pressure and cholesterol are normal. I do have mild COPD and my pulmonologist wants me to lose weight—but what else is new?  I moved to Florida and am swimming every day. As long as I can put in 30 minutes a day doing laps I think I’ll keep breathing.

As for weight-related ailments, my major complaint is osteoarthritis, but everyone else my age has that too, no matter what they weigh. I doubt my weight has caused my finger knuckles to swell.

Now, my biggest regret is wasting all those years feeling fat and ugly. I look at old photos of my young, pretty self and want to cry. All the “you better lose weight or else” speeches I endured served one purpose -- to reassure the people making them that no matter what they looked like or how poorly they took care of themselves, at least they were better off than me. I nodded or muttered that they were probably right or, at best, I ignored them. Now, looking back, I wish I’d told them my weight was none of their business.

Fat in our society is despised beyond all reason. We fat people are walking repositories of everyone's else's deepest fears: fear of being ugly, of being an outcast, of an early death. Our fitness-obsessed society secretly believes that if you stay thin and fit you can magically stave off the grim reaper. But guess what? Thin people get sick and die, too.

So here I am, 73 next month, shrunk from 5-foot-2 to 5-foot-zero and weighing 200 pounds. I feel fine. I have every expectation of living into my 80s. And the best thing about aging while fat is that I rarely get lectured about my weight anymore. After all, no one can tell me my obesity is going to lead to an early death. Ironically, these days I often hear the opposite. People insist I'm not fat even when I tell them how much I weigh. I suspect it’s less shameful to be fat once you pass the age of sexual desirability. So maybe all those people who expressed concern were really more worried about my flouting the norms of female beauty than about my health. Now, I’m more likely to be advised to wear makeup and color my hair than to lose weight.  Whatever the reason for that, I am thankful to have finally aged out of fat shaming.

Erica Manfred's work has appeared in many on and offline publications including The New York Times, Atlantic.com, Purpleclover.com, Village Voice, Cosmopolitan, Ladies Home Journal. She is a regular contributor to seniorplanet.org. She has written four books including "He's History You're Not; Surviving Divorce after Forty."