Center for Medical Progress founder David Daleiden, not PP, indicted for the "purchase and sale of human organs" 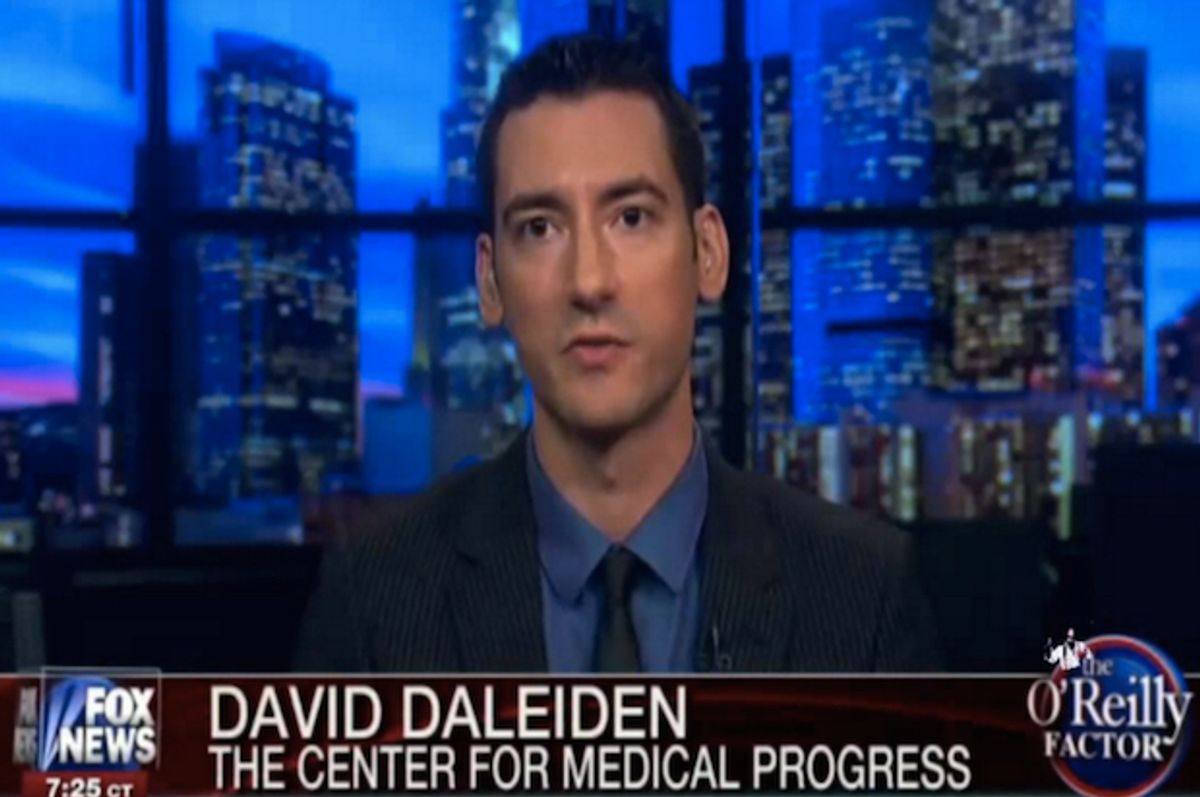 A Houston jury investigating alleged misconduct by Planned Parenthood declined to charge the women's health provider, announcing instead felony charges for the leaders of the anti-abortion organization that targeted Planned Parenthood with its widely debunked series of "sting" videos in 2015.

The grand jury said they did not find evidence of illegal activity on the part of Planned Parenthood after reviewing the covert videos meant to misleadingly implicate the women's health provider in the illegal trafficking of fetal tissue. Texas Lt. Governor Dan Patrick ordered an investigation of the nation's largest women's health care provider in August, following suit with a host of conservative state lawmakers. Despite the decision by the grand jury to absolve Planned Parenthood of any wrongdoing, Texas Governor Greg Abbott released a statement doubling down on the state's efforts to investigate the organization.

“Nothing about today’s announcement in Harris County impacts the state’s ongoing investigation,” Abbott said after the announced indictments. “The State of Texas will continue to protect life, and I will continue to support legislation prohibiting the sale or transfer of fetal tissue.”

David Daleiden, the 26-year old president of The Center for Medical Progress, and Sandra Merritt, founder and CEO of the fake tissue procurement company created to misleadingly gain entry into abortion clinics, were indicted for “tampering with a governmental record,” while Daleiden received an additional indictment for “the purchase and sale of human organs.” The first charge is a second degree felony and the second is a Class A misdemeanor. As the Houston Chronicle notes, a second-degree felony carries a punishment of up to 20 years in prison.

According to Planned Parenthood, Daleiden secretly recorded its staff and patients more than 65 times over the past eight years.

“It affirms 100% what we have said from the very beginning, and that is that Planned Parenthood follows local, state and federals laws and extremely high medical standards, and our first priority is patient care,” Rochelle Tafolla, with Planned Parenthood Gulf Coast, told Houston Public Media after the indictments were announced. “These individuals broke the law and committed fraud in order to spread lies about Planned Parenthood and today they’re going to be held accountable for breaking those laws.”

Before news of his indictment broke, Daledian published an op-ed in USA Today on Monday, slamming Planned Parenthood's lawsuit as "anti-free speech" and regurgitating his debunked claims to call for the defunding of the organization:

Planned Parenthood cannot rebut the incriminating statements of its own leadership on these tapes, and so it has resorted to an awkward shuffle of blind denials and stagy distractions in their wake. The truth will continue to come out through the congressional probe, through the ongoing state investigations and through the frivolous lawsuit Planned Parenthood now brings in retaliation for its exposure.