"Revolution is ongoing": On 5th anniversary of uprising, imprisoned Egyptian activist says fight for liberation will go on

One form of tyranny has been replaced with another in Egypt, but, for some revolutionaries, the struggle continues 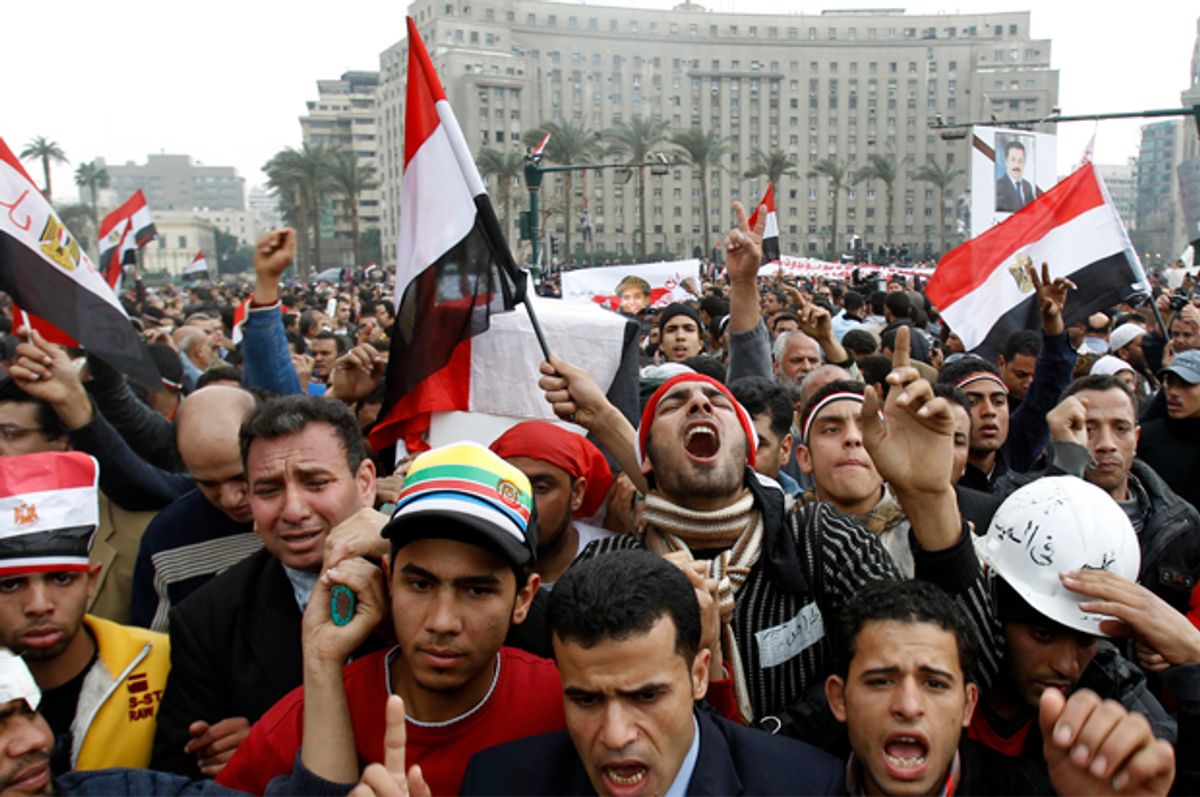 The Egyptian people shook the world five years ago Monday, launching a revolution against a Western-backed dictator that had oppressed them for close to 30 years.

Almost 2,000 days after the uprising, many hopes have been dashed, as one form of tyranny has been replaced with one that is even worse. Yet, for some revolutionaries, the struggle goes on.

Jan. 25, 2011 marked the beginning of the Egyptian Revolution, the second movement in the so-called Arab Spring, a series of uprisings throughout the Middle East and North Africa in late 2010 and 2011.

Tunisian street vendor Mohamed Bouazizi set himself on fire on Dec. 17, 2010, in protest of the corruption and repression of Zine el-Abidine Ben Ali's Western-backed authoritarian regime. Bouazizi's death by self-immolation sparked an uprising in Tunisia that toppled the dictator, and revolution spread throughout the Middle East.

Egypt was the next locus of change. The Jan. 25 uprising forced Western-backed dictator Hosni Mubarak to resign on Feb. 11. Mubarak had tried to brutally repress the revolution. According to official figures, Egyptian security forces killed at least 846 people and injured 6,000 more in the 18 days of protests. The U.S. supported Mubarak until the last minute, until it was clear that he would inevitably fall.

The U.S. government, and much of the media, refused to recognize the military coup as a coup. The Obama administration promptly resumed its $1.5 billion in annual military aid to Sisi's regime. Secretary of State John Kerry infamously declared, in reference to U.S.-made military helicopters, "The Apaches will come, and they'll come very, very soon."

In August 2013, General Sisi carried out the bloodiest crackdown on dissent: the Rabaa Massacre. The Egyptian regime killed at least 1,150 protesters in July and August. On Aug. 14 alone, Egyptian forces killed a bare minimum of 817 people, and more likely more than 1,000, according to Human Rights Watch, as they mowed down mostly peaceful protesters at Rabaa Square in downtown Cairo. Human Rights Watch said the attack was likely a crime against humanity.

Kenneth Roth, executive director of the leading rights organization, described Sisi's massacre at Rabaa as "one of the world's largest killings of demonstrators in a single day in recent history." He called it "a violent crackdown planned at the highest levels of the Egyptian government."

On the fifth anniversary of the revolution, Egypt is ruled by a dictator who is widely recognized to be even more repressive and violent than Mubarak. And he is strongly supported by the governments of the U.S., the U.K. and Israel.

An estimated 40,000 political prisoners have been incarcerated in Egypt, including peaceful activists, labor organizers, journalists and intellectuals.

Mahienour el-Massry, a prominent Egyptian human rights lawyer and activist who was a leader in the revolution, was imprisoned by the regime for participating in a peaceful sit-in protest.

International human rights organizations have called for el-Massry's release. Amnesty International describes her as a "prisoner of conscience" who was "detained solely for peacefully exercising her rights to freedom of expression and assembly."

Amnesty also says el-Massry is enduring "atrocious" conditions in prison. She is cramped into a small, overcrowded cell in a women's prison and has access to water for just four hours per day.

Despite the hardship she has suffered and continues to bear, el-Massry is optimistic about the future of the revolution.

On the fifth anniversary of the uprising, the official Free Mahienour Facebook page posted a message from the imprisoned activist.

"We are still in the fighting ring," she declared. "Revolution is ongoing as life and dreams are ongoing. It does not stop for a person, and sooner or later, in our lives or in the lives of those who come after us, our revolution will be completed."

El-Massry condemned both "internal authoritarianism and tyranny, [and] also an international system that is inhumane, and to which people mean nothing compared to profits and oil."

She also references the death of Egyptian feminist socialist activist Shaimaa el-Sabbagh, who was shot and killed by government forces on the streets of Cairo during peaceful protests on Jan. 24, 2015. A photo of a friend embracing el-Sabbagh as the 31-year-old mother and Socialist Popular Alliance Party leader, covered in blood, let out her final breaths went viral.

"Shimaa, in your first anniversary send our greetings to our angels, the martyrs," el-Massry wrote. "Tell them that we are still filled with hope, and that their prisons and their injustice increased nothing but our grip on our dream and our revolution."

This is the fifth year of the revolution. I almost cannot believe that five years have passed since the chants of “the people want to bring down the system” and “Bread, freedom, social justice, human dignity!” Maybe this is because even in my cell I am filled with dreams of freedom and with hope.

Some see that after all these years have passed the revolution has been defeated. Others see that there could have not been anything better than what happened. The regime, however, feels that they have won. But is this the correct and decisive answer? Are we defeated and has the revolution ended? Have we always been nothing but victims? Has authoritarianism rooted itself strongly by force and tyranny most of the time and sweet talk at other times?

Maybe because I am among the believers in the dream, and among those who are convinced that we not only face internal authoritarianism and tyranny, but also an international system that is inhumane, and to which people mean nothing compared to profits and oil. I therefore see that we are still on the journey to build a humane and just society. We made mistakes sometimes, we were defeated sometimes. We were arrogant sometimes and hopeless at other times, but we are still in the fighting ring. Glorification, however, is the voice of the stupid, and crying over the ruins is the voice of the cowardly and the desperate.

There are lessons for everyone, lessons we learned by chaste blood that have been shed for us.

The first of these lessons is that there is no individual salvation, and that desperation and the attempts to escape to the outside or the inside will not help us make our day better. When we only saw ourselves and started calling for freedom only for those we know, and did not move for freedom for all people (for example, in prisons there are not only thousands of innocent political prisoners, but also thousands of citizens who have been framed, or fell in debt or are serving time instead of others, because of the economic system of the state, and many other cases). If we allow the regime to separate us from the street and from our goals, then they have won the last round.

Second: We were overcome when we looked the other way as others were overcome. Revolution is humane by nature and it does not make us accept any injustice that befalls even those who oppose our opinion and even those who tried to obliterate us. Accepting injustice against one person will make it reach us all.

Third: We are not satisfied with the honor of trying. We should not continue running in circles. We have to formulate the objectives of the revolution into movements and initiatives and begin organizing ourselves. If the interest of the counter revolution unites them, then the survival instinct should unify us (believers in freedom and those who stand against all forms of authoritarianism and backwardness).

Fourth: A scared regime arrests thousands and cancels elections (the student union elections for example). It shakes at the thought of an anniversary, despite the injustice of a whole year. It equates those who demand life with those who demand death. Oppression never mattered. It deepened the feelings of injustice, which strengthened the resistance. The people who moved for two days of the 18th and 19th of January 1977 but did not touch the head of the regime has learned the lesson and attempted to do away with the head of the regime in 2011, but this has not been completed yet.

Fifth: Revolution is ongoing as life and dreams are ongoing. It does not stop for a person, and sooner or later, in our lives or in the lives of those who come after us, our revolution will be completed, because people deserve better, and ugliness, no matter how much it tries to disguise itself, will eventually reveal its real face.

Shimaa, in your first anniversary send our greetings to our angels, the martyrs. Tell them that we are still filled with hope, and that their prisons and their injustice increased nothing but our grip on our dream and our revolution.