Sarah Palin's American lobotomy: The Republicans keep making us dumber, and not even Stephen Colbert can save us

We know the GOP is angry. The bigger problem is that it's stupid. And like rage, the idiocy flows down from the top 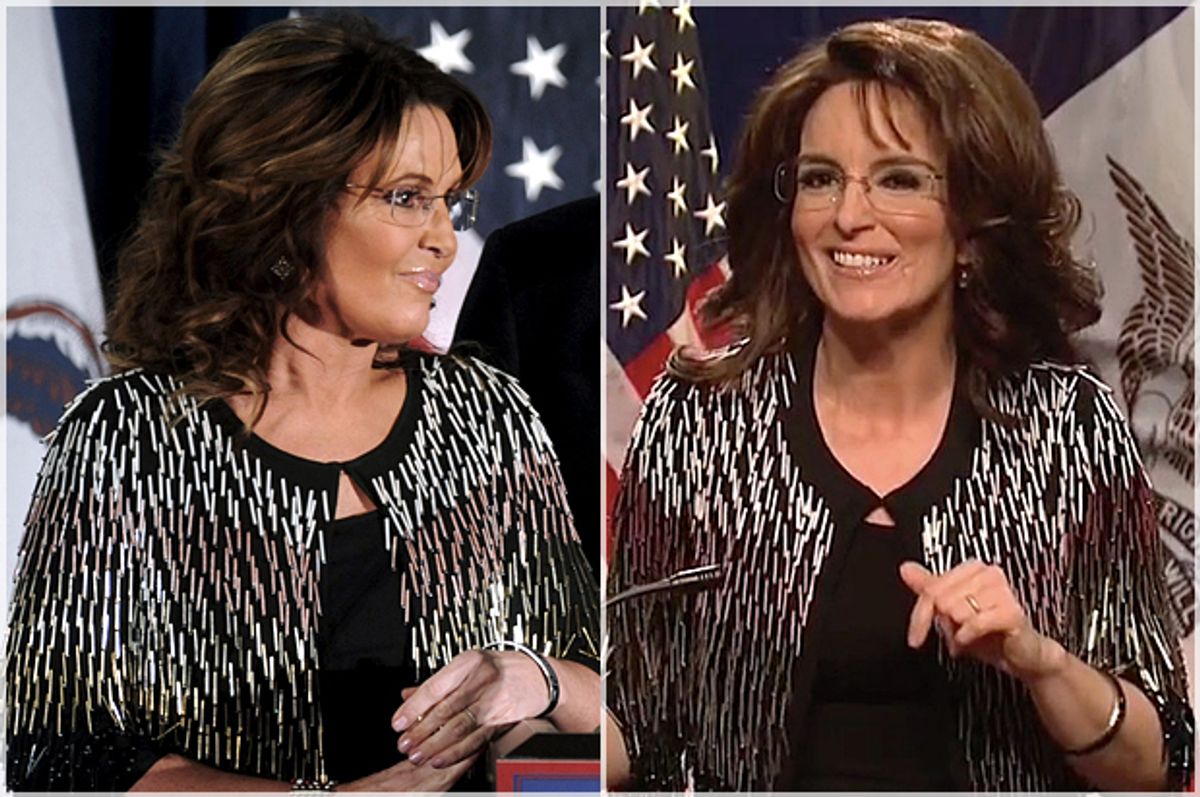 This last election cycle has revealed an increasing divide over how segments of the population understand political issues. According to Pew, “Partisan polarization – the vast and growing gap between Republicans and Democrats – is a defining feature of politics today.”  The problem is not simply connected to opposing ideologies, though. Today polarization is the defining feature of Tea Party politics.  From the Bundy gang to Donald Trump’s rallies, we are witnessing a rise in aggressive and divisive politics.

All of this was on display as Sarah Palin reemerged on the national stage this week to endorse Donald Trump.   She is, after all, the poster girl for just this sort of rhetoric.  Remember that she had Rep. Gabrielle Giffords in a crosshairs on her website telling supporters to "reload" and defeat.  After Giffords was shot, Palin still wouldn’t back down from her violent rhetoric.

But here’s the thing: Palin incites violence, but she is also incredibly dumb.  So dumb, in fact, that she doesn’t seem to be able to speak in complete sentences.

Throughout her entire career she has surprised us with her stupidity.  Remember when she couldn’t answer Katie Couric’s questions about which magazines she reads or when she wrote on her hand to help her remember her talking points at a Tea Party Nation event? And yet, in comparison to the nonsense that came out of her mouth at her Trump endorsement speech, those moments seem relatively lucid.

Almost everyone covering the story of her Trump endorsement was absolutely astonished by her incoherent blathering. The New York Times covered “the most mystifying lines” of her speech.

Of course it has to be said that seemingly on Fox News, Palin gets treated like a serious statesman rather than an incoherent wingnut.  Megyn Kelly might have had a hard time choking back chuckles when she interviewed Brit Hume about the speech, but she still conducted a straight interview where Hume simply talked about how the endorsement would affect the Ted Cruz campaign.

For Fox News the speech was a significant political moment, not a blathering of embarrassing nonsense.  But then again Fox News once used a picture of Tina Fey impersonating Palin as a graphic on a story on Palin—when Palin actually worked there.  So there is little reason to trust their coverage of her.

Thankfully, the late night comedy crowd was prepared to correct the failures of Fox News reporting once again.

Larry Wilmore asked on “The Nightly Show” if Palin was drunk: “I’m not even joking, you guys. She sounds wasted, right?” Wilmore claimed that Palin’s rambling, nonsensical speech couldn’t even be compared to a “word salad.”

James Corden compared her speech to a Dr. Seuss book—if Dr. Seuss “wanted to deport all of the Woozles.” Corden called her speech “particularly confusing,” and reminded his audience of the role that Palin played in destroying John McCain’s run for the presidency:  “You just know that John McCain is on his couch at home watching the TV being like, Donald – dude – this is a bad idea.”

Conan O’Brien referred to her speech as “rambling,” “strange” and “nonsense.”

Even Jimmy Fallon, who typically side steps any serious political comedy went after Palin’s inane blather, saying that he “thinks” that Palin was endorsing Trump, but wasn’t sure.  He then showed some of the highlights of her stupidity only to look confused and say “What?” He then poked fun at Trump who stood by Palin and looked like a fool.

Palin’s stupidity led to one of the very best bits yet in Trevor Noah’s career as host of “The Daily Show.”  He reminded viewers that there was a perfect synergy between Trump and Palin: “Trump is not the first American candidate to get so far in politics knowing so little.  He is the second.” He then went on to describe Palin as the “original” He described the speech as “all over the place.” And then said that it was “as if a bag of Scrabble tiles had grown a body and come to life.”

In one of his best lines yet, he claimed that: “It’s like the only thing Sarah Palin hates more than Obama is punctuation. Nobody talks like that. It’s almost like she’s a malfunctioning robot.”  He then went on do to a pretty hilarious impersonation of her talking to the people of Iowa as though they were cavemen who didn’t understand English.

And to the delight of many, Tina Fey reprised her Palin impersonation on “Saturday Night Live”.  Her angle?  Just basically repeat verbatim what Palin said.  That simple comedic tactic worked to effectively destroy the McCain-Palin campaign in 2008—and it is working again now.  When the nonsense Palin spews is repeated through Fey’s impersonating parody, it immediately reveals the depths of Palin’s stupidity.

The best Palin comedy came from seasoned Palin-basher Stephen Colbert who referred to Palin as “the original material girl” –since every time she makes a public appearance she offers more easy comedy material. “God, I have missed you! It’s like a magical eagle made a wish on a flag pin, and it came to life,” he exclaimed.  He, too, keyed in to the incoherence of her remarks: “Sarah Palin just guaranteed Trump the evangelical vote, because I think she was speaking in tongues.”  He then went on to Tase the part of his brain that understands sentence structure so that he could speak in Palin about the other candidates.

When Colbert hosted “The Colbert Report,” Palin was a frequent target.  Recall when he called her “a f$%king retard” in reference to her support of Rush Limbaugh referring to liberals as retards on his show.   That was the segment that also called her out for her use of a “hand-o-prompter” – notes written on her hand to help her in an interview.

One of Colbert’s best Palin takedowns took place back in 2011 when he mocked Mika Brzezinski for daring to wonder how long the media was going to let Palin continue get so much attention. Colbert’s rant—where he lectures Brzezinski on how she needs to buck up and cover Palin anyway-- may be the best attack on her stupidity yet:

I know you think this story has no purpose other than keeping Sarah Palin’s name in the headlines for another news cycle. I know you think she has nothing to offer the national dialogue and that her speeches are just coded talking points mixed in with words picked up at random from a Thesaurus.

I know you think Sarah Palin is at best a self-promoting ignoramus and at worst a shameless media troll who will abuse any platform to deliver dog-whistle encouragement to a far right base that may include possible insurrectionists.

I know you think her reality show was pathetically unstatesmanlike and, at the same time, I know you believe it represents the pinnacle of her potential. And that her transparent desperation to be a celebrity completely eclipsed her interest in public service long ago.

I know that when you arrive at the office each day you say a silent prayer that maybe, just maybe, Sarah Palin will at long last just shut up for ten f*cking minutes.

And yet, here we are, five years later, and Palin is even less coherent than before and she’s back in spotlight supporting a candidate who has been shown to speak to his audiences at a fourth grade level.

Exactly how long is the stupid epidemic going to spread within the GOP?  It’s like stupidity is the Ebola of GOP politics—a metaphor you know Fox News would use if they weren’t so busy promoting the stupidity themselves.

As Lee Camp explained on last week’s episode of “Redacted Tonight,” Trump’s level of speech is the lowest of any presidential candidate.  He cites Trump in what seems like a direct channeling of Palin-speech “We have to build a fence. And it’s got to be a beauty. Who can build better than Trump? I build; it’s what I do. I build, I build nice fences, but I build great buildings. Fences are easy, believe me.” Camp explains that Trump “represents the continued dumbing down of America.”

Trump’s moronic comments are also wrapped in lies.  As Camp points out, Trump isn’t just talking like a fourth grader: “He is a dumb, dumb, lying fourth grader.”

Back in 2008, George Monbiot of “The Guardian” asked why morons are allowed to succeed in U.S. politics.  “How did politics in the U.S. come to be dominated by people who make a virtue out of ignorance? … How did Sarah Palin, Dan Quayle and other such gibbering numbskulls get to where they are?”

Monbiot notes that Bush and Palin were candidates that flaunted their stupidity.  He notes not just the dumbing down of the U.S. electorate, but also the celebration of stupidity that has emerged in force in U.S. politics.

Don’t forget that in the first GOP debate, Trump remarked that “We need brain.”  He literally used a totally stupid phrase to argue for intelligence in government. How exactly does such a completely moronic statement go unchecked?

Well it doesn’t, of course. After the debate there was a flurry of memes that emerged to mock Trump’s comment.   And Twitter blew up with a host of citizen-satire that mocked Palin’s idiotic comments.

The Daily Currant highlighted Palin’s stupidity by running a satiric piece that compared her to a dumb school kid: “Sarah Palin has reportedly been stuck for several hours after licking a frozen flagpole outside a rally in Des Moines, Iowa this morning.” The piece went on, “I know Sarah Palin isn’t the brightest politician in the world,” says one Iowa Republican attending the rally. “But you would think that being from Alaska she would at least understand the concept of metal being cold.”

And, as mentioned, the professional TV comedians weighed in too.

Every time we get GOP nonsense, someone calls it out.  But so far, calling out the stupidity and laughing at it, isn’t hurting Trump or Palin.  It doesn’t hurt because over time we have watched the GOP become dominated by the idea that truth, reason, and critical thinking are a liberal agenda designed to destroy our nation’s core values.

Here’s the irony though. Intelligence is actually a core value of U.S. politics, or at least it used to be. Elvin Lim has found that over time our political rhetoric has relentlessly declined.  In fact, he notes a nosedive in intelligence in public speech since the founding fathers.  President George Washington’s “Farewell Address” in 1796 was written at graduate-degree levels: Grade 17.9 , while President Abraham Lincoln’s “Gettysburg Address” in 1863 was at an 11th-grade level.  Now we have Trump coming in at fourth grade.  I’m guessing Palin doesn’t even rate that high.