The "party of responsibility?" — yeah, right: GOP leaders love blaming everyone else for their own screw-ups

Conservatives love preaching about personal responsibility, but they need to learn to start taking it first 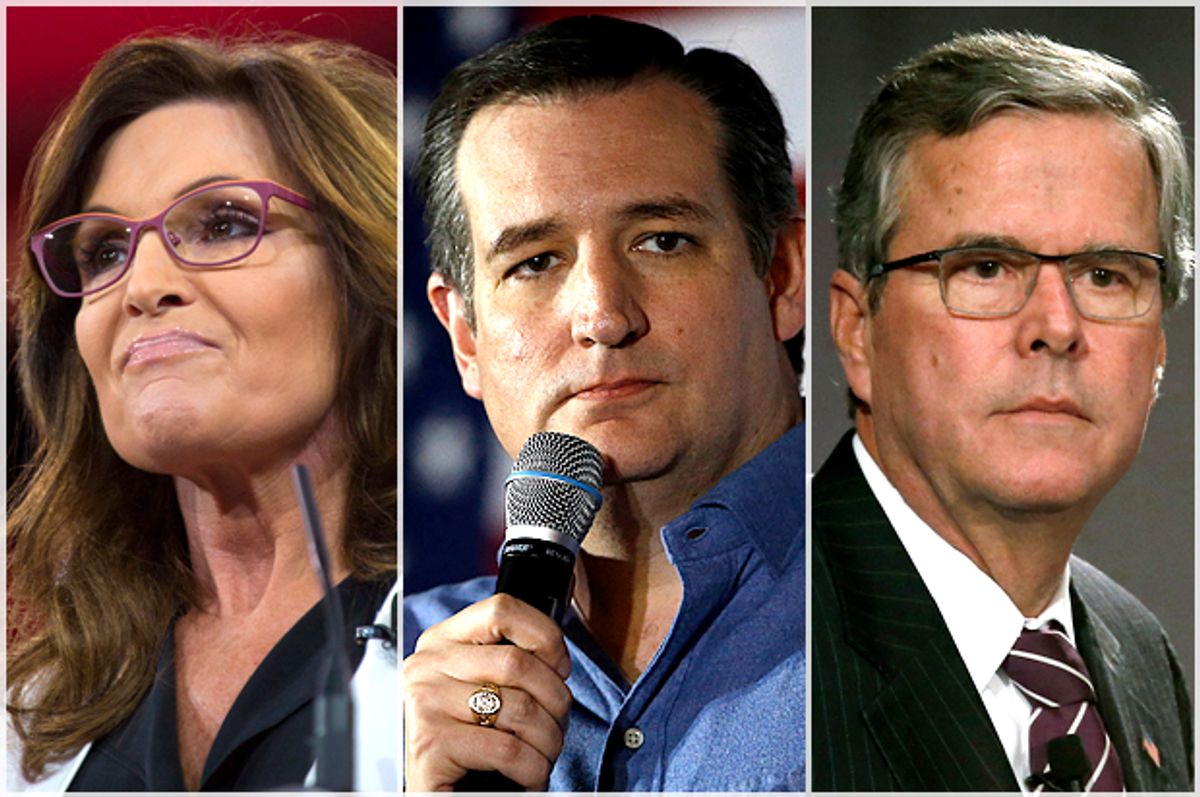 Republicans like to think of themselves as the party of "personal responsibility," The phrase props up repeatedly on conservative websites listing what their supposed values are. In his infamous, supposed-to-be-private, "47 percent" speech to wealthy donors in 2012, Mitt Romney notoriously declared, in reference to Obama voters, that he'll "never convince them that they should take personal responsibility and care for their lives."

In 2014, Ted Cruz tried to justify cutting people off from food assistance by saying, "Instead of locking people into an endless cycle of dependence, we should be focused on making it easier for people to stand on their own feet by getting this weak economy booming." (A fallacious assertion, as food aid both helps people get on their feet and is by far one of the most cost-effective ways to stimulate the economy.)

But what's become quite clear in recent months is that, for conservatives, "personal responsibility" is for other people. Conservatives love shaming genuinely responsible Americans because they occasionally need some help in hard times, but when asked to take responsibility for stuff that is actually their responsibility to take, conservatives will, more often than not, scream bloody murder.

The most recent example is Ted Cruz, who is a master class in avoiding personal responsibility. Cruz has been running around claiming that the reason he doesn't have health insurance right now for his family is because of Obamacare. The actual reason is that he's irresponsible.

Back in July, Cruz's insurer decided to eliminate PPO plans in favor of HMO-only plans and gave policy holders a whopping five months to make the switch if they wanted to. Cruz apparently just forgot to do it, and now his family is scrambling. But rather than admit that he made a mistake and failed his family, Cruz is blaming the Affordable Care Act, as if no insurance company prior to the ACA ever did anything like adjust their rates or change the insurance options.

"By the way, when you let your health insurance policy lapse, your wife gets really ticked at you," Cruz cracked at a campaign stop. Ladies are always nagging, am I right, fellas? Sure, Cruz thinks your kids should be hung out to starve if you lose your job due to layoffs that are not fault of your own, but if he just forgets to sign up for health insurance for five whole months, well, don't be some kind of drag. It's all Obama's fault, anyway!

There's a reason that "Thanks, Obama" so quickly became an ironic expression liberals used to poke fun at conservatives who love blaming the president for their problems when the real culprit is usually best seen in a mirror. But what's sad is that Cruz blaming Obama for his own failure to use that five-month window to sign up for health insurance is that it wasn't even the worst example from that week of this phenomenon.

No, that prize goes to Sarah Palin. Her son, Track Palin, was arrested on charges of domestic violence last week and rather than blaming her son for his choices or herself for bad parenting, Palin decided to blame, yes, Obama.

"When my own son is going through what he goes through coming back, I can certainly relate to other families who feel these ramifications of PTSD… our soldiers do return with. And it makes me realize more than ever it is now or never for the sake of America’s finest that we have a commander-in-chief who will respect them," she claimed, in an extraordinarily maudlin dodge of personal responsibility.

It was particularly jaw-dropping because Track's service started during the Bush administration. Even if you want to pin this one on PTSD, maybe start with the guy who started an unnecessary war that exposed so many young men and women to the horror of war in the first place. But, of course, that also requires taking personal responsibility for voting Republican, and Palin recoils from personal responsibility like a vampire from the sun.

Track Palin's girlfriend is accusing him of waving a gun around during the alleged assault, which is leading to a charge of weapons possession while drunk. All of which brings to mind another shibboleth of the right wing, this notion that guns should remain relatively unrestricted so as not to interfere with the rights of the mythical "responsible gun owner." Sarah Palin in particular likes to hold out her family as the icons of said responsible gun owners who are clearly just so full of responsibility that it's downright unholy to suggest they might ever do anything less than noble and totally responsible with their guns.

You know, right up until one of them gets arrested for allegedly waving one around, while drunk, while also allegedly kicking and punching his girlfriend.

The notion that we should respect the rights of "responsible" gun owners would be more compelling if there was a single indication that conservatives are actually cultivating responsibility within their ranks, especially on the issue of firearm use.

Instead, we get an endless stream of stories about gun nut America proving how incapable they are of living up to the responsibilities that should define the responsible gun owner: A drunk dude fumbling with and shooting off a gun at a showing of "13 Hours." A self-appointed vigilante who decides that being a "good guy with a gun" means shooting wildly at shoplifters, even though she's in a parking lot where those bullets could hit all sorts of people. (And even though there's no reason to think that shoplifting is a crime requiring immediate execution without a jury trial.) And, of course, the endless stream of "responsible" gun-owning men who get angry and/or drunk and decide that guns are pretty good tools for terrorizing or killing the woman you supposedly love who has dared disagree with you about something.

But perhaps the greatest example of the conservative inability to understand that personal responsibility starts at home has to do with the rise of Donald Trump. How this has happened is no great mystery. Trump is a direct product of decades of conservative pundits and politicians feeding the conservative troops an endless barrage of falsified stories about how they're so oppressed by having to share this country with people who are different.

And now Trump is riding high on that narrative, but rather than accept and own their part in this, the conservative establishment is ready to blame anyone but themselves. Jeb Bush, of course, blamed Trump on Obama. That ridiculous National Review "Against Trump" issue played multiple variations on the theme, trying to lay Trump at the feet of Democrats and Obama specifically. Jonah Goldberg, in a desperate bid for relevance, blamed FDR, of all people.

Too bad conservatives are so bad at taking their own advice on this "personal responsibility" thing. If they ever bothered to examine how they got it all so wrong, perhaps they might be able to right the ship.