Days away from Iowa vote, forum shines light on giant gulf between Republicans and Democrats 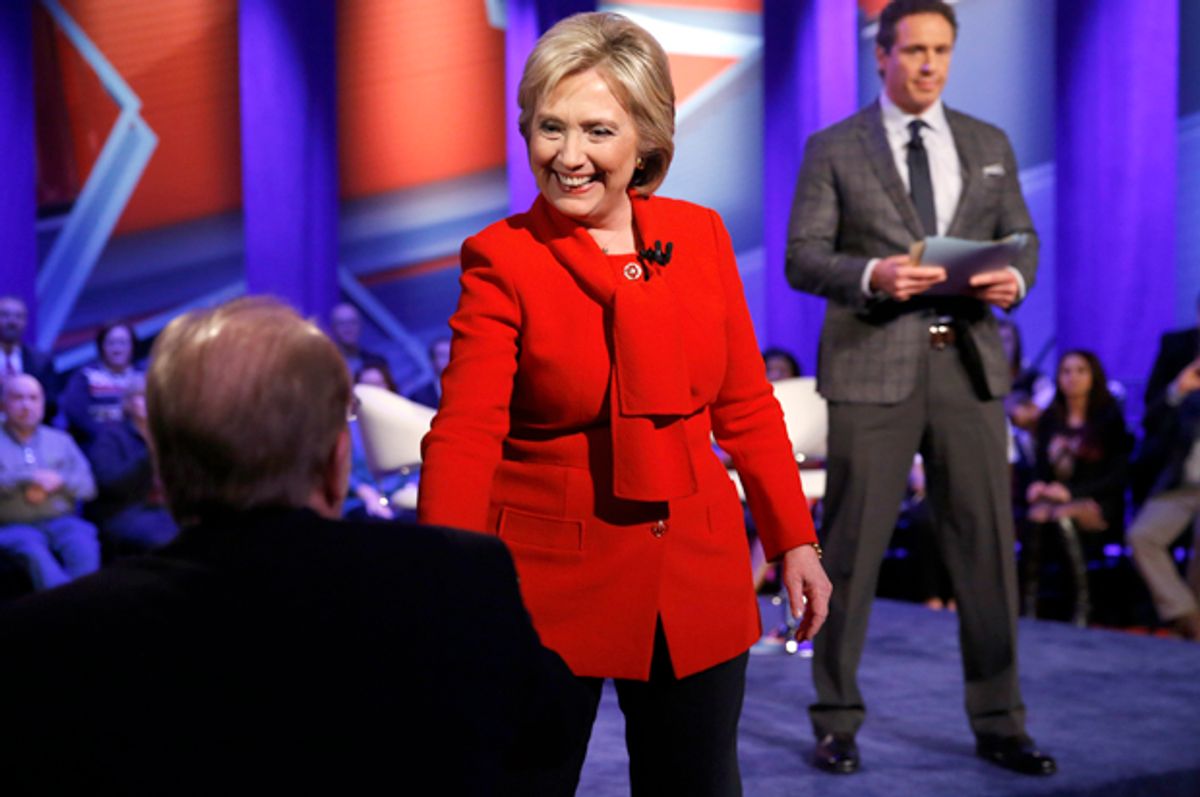 With less than a week to go before the first votes are cast in the 2016 presidential campaign, Monday night's CNN Democratic town hall was not a standout for the repeated campaign pablum from the candidates — although the attacks got sharper and the retorts got quicker — but rather the thoughtful and substantive questions from Democratic audience members.

Bernie Sanders was up first, fielding a series of timely audience questions on the recent flap over his "establishment" comments to dismiss Hillary Clinton's endorsements from the Human Rights Campaign and Planned Parenthood, his past vote shielding gun manufacturers from liability and how he plans to get his ambitious agenda through such a bitterly divided Congress.

"We need a political revolution," Sanders said in response to the final question, rehashing much of his stump speech in front of a national audience. "We are touching a nerve with the American people who understand that establishment politics is just not good enough."

But perhaps the most controversial answer of the night came from the Vermont senator as he attempted to explain his plan to expand health care. "We will raise taxes. Yes, we will," the longtime Independent boldly proclaimed, explaining that most Americans would see an overall savings as private insurance premiums are eliminated.

Seeking to reiterate a sharp distinction between himself and his main rival a week ahead of the first votes in Iowa, Sanders exalted his progressive bona fides. "I voted against the war in Iraq ... Hillary Clinton voted for the war in Iraq," he began. "I led the effort against Wall Street deregulation. See where Hillary Clinton was on this issue."

But shortly thereafter, Sanders' argument of standing as a strident liberal was challenged by the second town hall speaker, Martin O'Malley.

"My story is not the story of a Democratic conversion, but of a Democratic upbringing," O'Malley bragged, echoing a favored campaign trail line mentioning that he is the only candidate in the field who has been a Democrat his entire life.

Like Sanders, O'Malley received a round of hard-hitting audience questions, beginning with an opening zinger from a resident of Ferguson who asked the former Maryland governor to defend his record as Baltimore mayor, overseeing a rapid expansion of the police state. (Sanders' first audience question was on how he defines socialism).

In the end, the longshot candidate declined to instruct his Iowa voters on whom to support should his campaign prove unviable. "Hold strong at your caucus," O'Malley urged.

Finally, it was Clinton's turn at bat and she showed up full of energy in hour two. And like Sanders and O'Malley before her, Clinton was peppered by difficult questions from the audience, beginning with a skeptical young voter who demanded an explanation for why his friends find the former secretary of state so untrustworthy and immediately followed-up by another young voter seeking assurances that Clinton's leftward tilt in the primary will continue through the general election and into a potential Clinton administration.

While most of the candidates' answers have already been heard by even the most casual observers of this election, it was the substantive town hall questions from the audience that really stood out in a debate season marred by inept moderation and non-existent policy prescriptions on the more widely watched GOP side.